The ” mystery tourism ” , also known as ” Dark Tourism, or black” , ” Dark Tourism ” in English, has in Toledo one of its main areas of interest in Spain. Below we will recommend three routes or guided tours different from the usual in this great monumental city. If you think you’ve seen it all, don’t miss one of these tours: Mysterious guided tours in Toledo.

This type of tourism has great implantation and enormous public success in other countries. To mention some important points, we could mention the ghost tours to castles in Scotland, tours on famous murders in London, certain prisons open to the public, visits to mummies under certain churches or cemeteries … There is a large public interested in knowing that other part of history not so narrated in the typical guided tours (although more and more tends to include this type of tourism also in the more conventional tourist packages). In the case of Toledo, the company ” Visitas Guiadas Toledo” is a reference of this type of mystery routes. Recognized with various awards and recognitions, mentioned in numerous press media, object of study in Universities, specialized publications and mentioned by famous communicators in the field of mystery in Spain, as you can see at the end of this article.

What can I do in Toledo related to Mystery Tourism?Mysterious guided tours in Toledo

Is this the second or third time you have visited Toledo? Maybe it’s your first time but are you tired of going from one monument to another? Is it after 6 pm and all the monuments have been closed and you don’t know what to do? Are you from Toledo or do you live nearby, in Madrid and you think you know the city? If you have always liked the great monuments that house our city, but you have already visited them on some occasion and you don’t want to repeat, there are other ways to get to know the city, especially at night.

First of all, sleeps some night in Toledo . Our city is ideal to spend a weekend or a festive bridge. Don’t come from Madrid one afternoon and leave on the last AVE or bus that leaves the station. This is a big mistake. Toledo is totally different at night. It is ” magical” . And the night lighting of the monuments is unique and very special.

Toledo by Night by Toledospain

Undoubtedly it is always necessary to know the rich heritage and monuments of Toledo . It is necessary to visit the Cathedral, the synagogues and museums, etc. There are also numerous guided tours and resources. We have talked about it in other occasions and in this link there are several recommendations.

But the purpose of this article is to introduce you to other routes. The ones that are made when night falls, when few walk through the narrow and hidden streets of the Toledo labyrinth, making other alternative routes to the great monuments, and narrating very different stories of the lives of kings, dates of construction and architectural riches that the day tours have.

I’m sure you’re also interested: 20 free things to do in Toledo

These are guided tours mysterious , sometimes even ” secret ” , which are not offered in the ” official” tourist offices, which are sometimes only contracted on the Internet. The discovery of these other ” routes” is sometimes transmitted by word of mouth between travellers, in Internet forums, on social networks. Its fame is essentially being created from the new phenomenon of direct transmission, between those attending these routes, leaving aside the traditional channels of tourist information.

Sometimes a brochure we find in the hotel, a poster stuck in a Toledo square, or a publication in a social network such as Whatsapp or Toledo Facebook group. Certain very special routes, which are only done once a year, and which tell us about the mysteries of the city, access to secret places, private visits or with guides really recommended by travelers.

We are going to mention three routes that show us the ” other Toledo” , the one that begins to be counted when the afternoon falls, the one that is discovered walking through solitary alleys of Toledo:

The Cathedral by Night by Toledospain

At this time, the city’s most famous mysterious route, which many people attend every time it is done. It narrates experiences told to the guides who organize it directly by the neighbors of Toledo, by the residents and workers of the great monuments or by travelers who have had certain ” experiences” in their accommodations in the city (that is, who have spent a ” Toledo Night” ). These kinds of experiences do not appear in history books, but we do read about them occasionally in the city’s press. Strange events, houses uninhabited for hundreds of years, different phenomena in the large spaces of the city, old stories of ghosts and ancestral haunted houses. You will believe or not, but surely the stories told will not leave you indifferent. This route usually includes a theatrical stop . In winter it is usually done on weekends, at night. In summer, almost daily you can book on this link: Route ” Toledo Siniestro: houses and enchanted places” .

It is the route of the ” different” anecdotes and curiosities of the city. Toledo really is a magical, legendary city. Very special if you visit at night.Enter the Imperial City, meet the inhabitants who were never censored, who respond to names of witches, sorceresses, magicians … Learn how they lived and how they hid. Follow us through dark alleys, under old sheds and enchanted spaces. On many occasions this guided tour includes access to a very ” special” private cave: Route ” Discover the Magic Toledo” 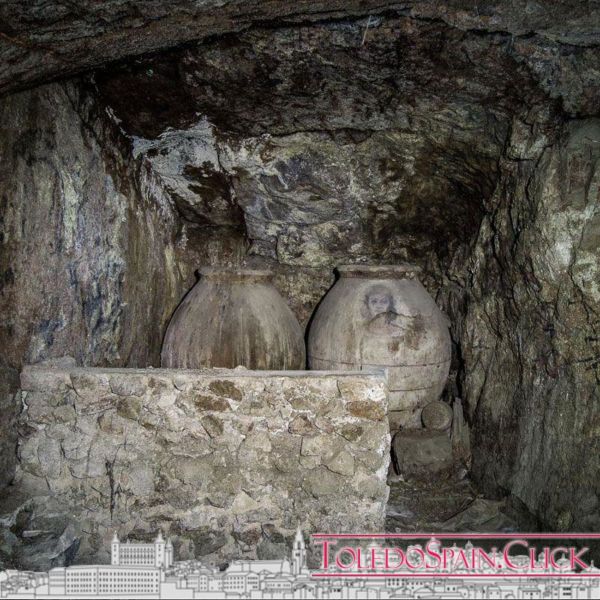 Cave to be visited on a nocturnal route through Toledo

If you are lucky enough to visit our city on a bridge, Halloween , in summer, sometimes there are ” special” routes that are not done during the rest of the year. The themes can be very varied: ” Toledo Secreto” (sometimes mummies are visited in convents), ” Templarios en Toledo” , ” La bruja de Toledo” , ” El Nigromante” , ” Inquisición toledana” … All alternative themes to what is narrated in other routes and that usually include access to exclusive spaces, street theatre or monuments. All you have to do is consult this calendar to find out if there will be a ” special” route scheduled when you visit Toledo.

If these types of routes ” scare you” , or are not your style, there are other visits also quite curious but do not include the factor ” ghostly” or so mysterious. For example we recommend routes like ” Toledo subterranean” (you can visit up to 7 subterranean under the city) or ” Legends and myths” .

And if you’re not sure if you want to make a reservation (it’s highly recommended because places are very limited and are usually filled especially on weekends), read first the opinions that other travelers have already left about this type of routes here.

By the way, look who’s recommending these routes: