On Calle de las Bulas, in the house that once housed the ” Museum of Contemporary Art” in Toledo, we can see on its façade, near the front, some sturdy hanging chains, a reminder of the history that is now told here.
Legend has it that there lived a converted Jew, the most skilful iron worker. From his hands came noble grilles, knockers of the strong Toledan doorways and also some of the most famous Toledan steels, destined for the knights who fought against the Moors in the south of Castile. in the basements of this house worked our protagonist, under a beautiful courtyard and behind wide walls that were quite hidden from the intense heat of the Toledan summer and removed from work the curious glances of neighbors and passers-by. Some commented that this house was not the property of a convert, although they did not know that it had been given by a famous gentleman in payment for some magnificent work done. These orders continued to arrive, as the war in Granada continued… 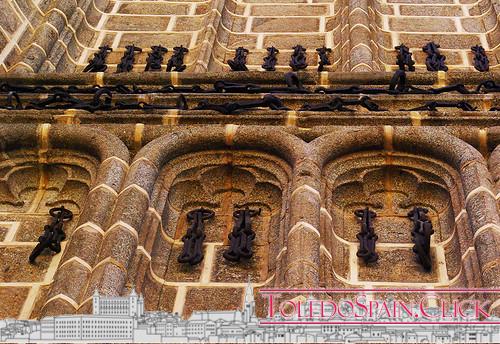 Chains in the walls of the monastery of San Juan de los Reyes also remain as a souvenir. Photo: Crisisis en Flickr.com Click here to place this legend on the map Date of initial publication on this website: 22/06/2009 Surely you are also interested: The mystery of a sepulchre