According to Toledo’s oral tradition, a group of Hebrews residing in Spain in 1491 decide, upon observing the Inquisition’s treatment of their brothers, to give a lesson to Christians by kidnapping a child and subjecting him to horrible torment in the locality of La Guardia… A supposed crime that we now narrate in the following lines.

Explanatory note: Historical situation: it is 1491. Toledo is in the process of expelling the Jewish people, as is the rest of the territory now called ” Spanish” . The Catholic Monarchs have created the Tribunal of the Inquisition and these continuously instigate the Hebrews. The ” plain” people, also instigated by them, try to see in the ” Jews” the essence of all the problems that beset the society of the time. In the following lines we reflect the content of a ” legend” that does not cease to be the popular voice of the people of the time, which does not directly imply that what is discussed here is true or real. It is necessary to clarify that Leyendasdetoledo.com, does not share, as it is logical, the accusations that are poured in these texts that, although it seems incredible nowadays many believe ” to feet jungle” and others feel like ” a serious accusation” that still has not expired… Have we learned anything in these last five centuries? This legend is circumscribed in a convulsed, violent and intense historical environment, in an era of intense changes in which there were no major media, and the way to reach illiterate and uneducated people was superstition and the most serious accusations driven mostly by sectors interested in getting those that the Hebrews possessed, being the quickest way to foment hatred and their final expulsion from the Peninsula.

It is for this reason that we are trying by all means to discredit a people who, at forced marches, are forced to abandon their homes and march into an uncertain future, far from Toledo.

In those years, ” autos de fe” were common in Toledo to Jews. A group of Hebrews from Quintanar de la Orden, Tembleque and La Guardia had witnessed in the city the burning at the stake of a group of Jews accused of heresy by the Inquisition and, very dissatisfied with the horrible treatment that the Inquisition gave to those of their race, they decided to punish the Christians who believed so much in their religion and to such extremes went against their own.

They came into contact with Benito de las Mesuras, a Jew from neighboring France who now resided in the town of La Guardia.

The latter, who had knowledge of the necromancer arts, told them that by getting the heart of a Christian child and a consecrated host and burning them together, they would obtain poisoned ashes which, being poured into the fountains of Christians, would cause irreparable damage to all of them.

They chose a Jew named Juan Franco, who traveled from town to town with a cart as the ideal person for the kidnapping of a child selling different goods and, on a trip to Toledo, passing through the door of the Forgiveness of the Cathedral, he saw a young boy who, together with his mother, begged for alms. Offering different objects and sweets to the child, he did not take long to convince him to get in his car and go with him. So he took him to Quintanar de la Orden, where he was expected by the rest of the Jews eager to carry out his evil plan. No one suspected the trace in the village, since they thought he was the son of Juan Franco. Shortly afterwards he was taken to the town of La Guardia, where he was locked up and mistreated by his kidnappers. On one occasion he escaped, but was soon captured by his supposed father.

I’m sure you’re also interested: Why is the White Virgin laughing? A legend of Toledo Cathedral

The Hebrews waited patiently until the moment when they believed that Jesus of Nazareth had been put to death. For this purpose they chose the 14th day of the moon in March, which was the 31st year of the same month. The child suffered the same sufferings that the ancestors of the Jews did to Christ: scorn, outrages, slaps, scourging, crowning of thorns and, finally, a cruel crucifixion. All this happened on the outskirts of the town of La Guardia, in a cave in the southern part, where the ” Holy Child” is said to have suffered this punishment without exhaling a complaint or shedding a single tear…

Once crucified, they collected his blood. Then, with a knife, one of the Jews rummaged on the right side. They say that when the boy saw what they were doing to him, he told them what they were looking for. The Jew replied that the heart, to which the child, with a faint voice replied that he was on the other side. That’s how the child died. It is also said that at the time of the child’s death, the mother, who was in Toledo and blind, ” recovered her sight” …

The child was unnailed by the Jews and buried near a hermitage. They already had the heart. To get the consecrated host they contacted a Christian convert named Juan Gomez who was a sacristan at that time and did not take long to get it.

Having already had the ingredients of such a macabre plan, they decided to take them to the Aljama Mayor of Zamora. There they would be advised on the spell by the rabbis of this city. Benito de las Mesuras was in charge of the trip. Arriving on the way to the city of Astorga, not to arouse suspicion, the Jew approached the church as if he were a good Christian. But when he took out his prayer book, a great radiance flooded the nave of the church, leaving those who were there astonished. The Jew quickly fled the church, but was followed by one of the faithful who were there to the inn where he was staying and was later denounced to the Holy Inquisition.

The Inquisition did not take long to locate the Jew in the inn and take him prisoner, where with not a few jobs they managed, under torture, to extract his confession and the name of his cronies in the towns of Toledo.

He declared where he had hidden the relics he carried to Zamora, and once there, the inquisitors realized why the book shone. The mark of the heart had remained in the book, which had disappeared, but the consecrated host was still preserved. It was preserved and carried in procession to the convent of Santo Tomás, where it is kept in a reliquary recalling the event. It is said that in 1599, when there was a terrible plague in Ávila, this Holy Host was taken out in procession and the plague remitted.

Benito’s companions were also imprisoned in La Guardia and taken to Ávila, where they were repeatedly put in torment to confess their horrible crime. After confessing the crime, they were taken to La Guardia to indicate the place where they had buried the child; but although there were signs of having been there, they did not find the body, taking the fact as a miracle. They say that, later on, the neighbors dug up the place and found the hood and underwear with which the child had been buried.

As an exemplary punishment, all those who participated or collaborated in this macabre event were condemned to the stake. José Franco and his accomplices, as recorded in the inquisitorial records, were burned to death in Ávila on 16 November 1491.

Note: you can visit the village of La Guardia whenever you want. It is a beautiful village in the province of Toledo that still preserves in its tradition the veneration of the Santo Niño de La Guardia and in his honour they have a patron saint’s festival in September. 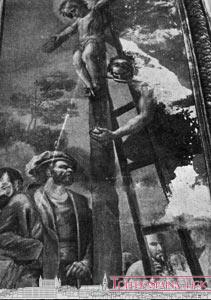 Rapture of the Holy Child of La Guardia, cloister of Toledo Cathedral (Bayeu)

You can read the full research at this link. (PDF)

Download in this other link a complete PDF document entitled ” History of the martyrdom of the Santo Niño de La Guardia” , written by Martin Martinez Moreno and stored in ” Google Books” . An important historical document to know the process. (Updated 23/01/09)

More information about the legend:

– Wikipedia. Article on the ” Holy Child”