The Toledo Consortium brings light to Toledo’s ” hidden” monuments. All those who have read or studied something about Toledo know that under the current buildings of our old town are hidden numerous remains of what for centuries has been the city in which we now tread and live. The Consortium of Toledo discovers us ” another Toledo” of which we speak so much in these pages…

Note: This information is not current. We recommend visiting ” Unknown Heritage Routes in Toledo” for information updated to July 2011.

For all those who have read or studied something about Toledo it is known that under the current buildings of our old town are hidden numerous remains of what for centuries has been the city in which we now tread and live.

Under floors, houses, monuments and walls is ” another city” that fed and saw live the Toledans of countless centuries: pre-Roman, Roman, Visigoth, Muslim, Jewish and Christian peoples, all of them had their public buildings, houses and monuments of which some are visible today, such as mosques or the great cathedral and, others, for the pressing needs of space that there is in the city have been buried under the current modern constructions.

Some, unfortunately already disappeared, such as the Roman theatre (but not the circus), and others, due to the neglect of the times and the rulers or the force of the Tagus, sometimes disappeared leaving little trace, such as the aqueduct that gave Toledo water in Roman times. Nor should we forget that many of the materials with which these buildings were built were built numerous private houses and monuments. In Toledo there are frequent cases of reuse of materials, and in many façades we see Visigoth, Muslim or Roman decorative elements emerging from among the bricks of the era, frequently used in houses in Toledo.

All this leads us to ” discover another Toledo” . The ” Unknown Heritage Routes” that the Toledo Consortium and other administrations very wisely finance allow us Toledo’s and current visitors to discover the remains of the city that was, and that disappeared for the reasons mentioned above. These routes consist of free guided visits to various monuments, archaeological sites and other places of interest that have recently been recovered in the city and that have been years and centuries without being able to be visited by the general public. A curious way of doing archaeology, given that sometimes it is necessary to facilitate access to these ” hidden monuments” found underground or in modern buildings difficult to access and owned by individuals who also try not to lose their property, as is logical. 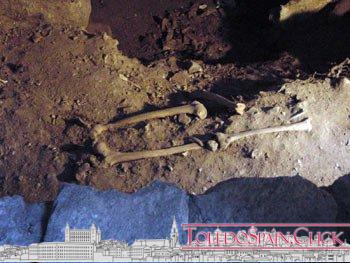 An initiative very worthy of recognition by all of us who respect history and the preservation of Culturel and archaeological heritage without which we would not understand our present richness.

Below is information about the different visits that can be made today through this initiative:

A Roman public building built around the 2nd century A.D. ” Remains are recovered in which lime concrete was used and it has a section of canalisation or vaulted gallery made with Opus Caementicum and an arch formed by cushioned granite voussoirs that must have formed part of the supply of clean water to the city and, specifically, given their dimensions, of the supply to the most important public buildings” . 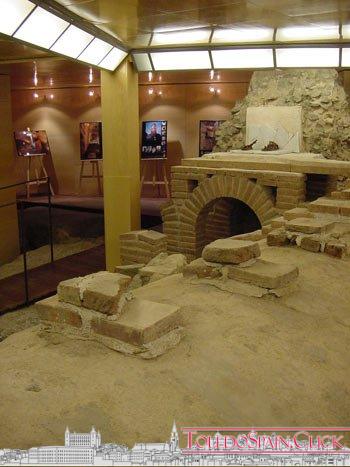 In 2002, the City of Toledo Consortium took charge of the remains of these thermal baths, carrying out an in-depth analysis of the remains and conditioning them for the Office of Attention to the Citizen and the researcher.

The Tower of San Román.

This tower can be accessed from inside the Museum of Councils, in the Church of San Román (C/. de San Clemente, 4) The visit to the tower allows you to know in 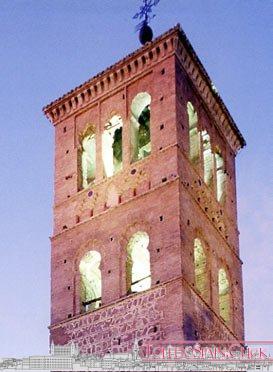 the historical, artistic and constructive characteristics of Toledo’s Mudejar towers. After the building was built in the 13th or 14th centuries, the bell tower was added and later joined to the body of the building.

It was restored in 2002, with the restoration of the four facades and the roof of the tower.

Vaulted basements and the Well of El Salvador. 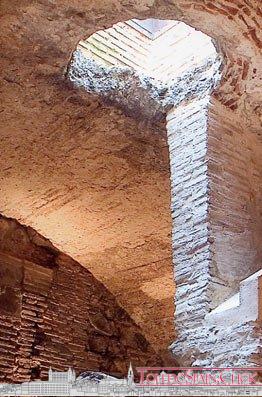 In the Plaza de El Salvador is the Culturel Center of the same name and also municipal archive. Excavations carried out in 1997 showed that a vaulted basement full of rubble was hidden in the extension of the cloister along the current square. This basement consists of two rooms, which highlights the main room, consisting of a barrel vault and a semicircular, built in brick. In the centre of it there is a well identified as a water reservoir. Its approximate chronology has been dated between the 12th and 13th centuries.

They are located on the right bank of the Tagus river near the Church of San Sebastián de las Carreras, in the Tajo rolling hills. They are a set of ” structures related to water, belonging to the Muslim world, made of brick and compartmentalised in several rooms or rooms whose roofs have disappeared.

The Islamic baths of Cenizal, preserved in the basements under the building of Calle Bajada del Colegio de Infantes number 14, have been archaeologically intervened by the Consortium discovering two rooms that form the bath or ” hammam” . The rest of the rooms would be under the adjacent buildings. This construction in turn would be supported according to the tastings carried out on another building of Roman epoch.

I’m sure you’re also interested in: Route through the Toledo Suberráneo

On numerous occasions we have spoken in these pages about these caves… The caves called ” Cuevas de Hércules” (see {ln:The Enchanted Palace of Toledo (II)} – {ln:The Enchanted Palace of Toledo (I)}) in Toledo really correspond to a space of rich architectural history, as it has been occupied by different buildings throughout history: In Roman times a water reservoir was built to supply the city from the aqueduct, later in Visigothic times a Christian temple was built here and later, around the 12th century a new temple was built on the same site, dedicated to San Ginés. This last church was demolished in the 19th century due to its precarious state. On the Roman deposit, an integral part of the legend that bears the same name, it has been investigated that it was built around the 1st century A.D. and later covered with large granite ashlars and divided in two in a longitudinal direction.

It can be observed in this recovered space the incursion that men of the Cardinal Silicon made in the middle of the XVI, to silence certain voices that endowed to this space of the mystery that still conserves in the legends. As they say in the pamphlet that is distributed in the open office for the management of these spaces: this ” operation contributed to generate even more mystery among the most naïve minds of the time and even of later times” . 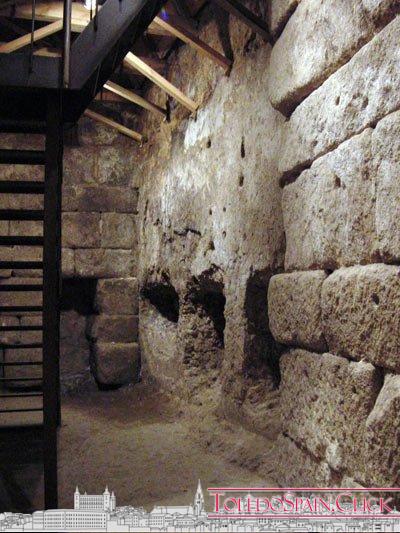 This house is accessed through the Shed of the College of Doncellas number 2, which gives access to a central courtyard. This intervention has been carried out on a house of Islamic design but with numerous reforms and enlargements during different periods of history. 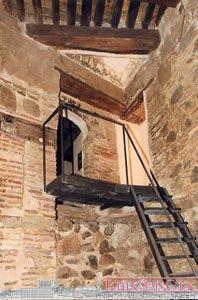 By way of conclusion, and looking far above these recovered rooms and monuments, we must once again acknowledge the work that is still being done and thank the various institutions for their openness, maintenance and publication.

If you visit Toledo, don’t miss these ” Unknown Heritage Routes” ; it’s a unique opportunity in a Spanish city.

Notice: this information is not up to date. We recommend visiting ” Unknown Heritage Routes in Toledo” for information updated to July 2011.