Do you think you know Toledo? The thousand-year-old city encloses within its walls remarkable curiosities that the memory of chroniclers prevents them from falling into oblivion. We begin this series of articles with some of the best known curiosities about Zocodover, the ” Campana Gorda” of the Cathedral, about the Toledo marzipan, the Azacanes and San Juan de los Reyes.

ZOCODOVER was a common place for executions. During the seventeenth century, it was common in this typical Toledan commercial square with all kinds of food and during every Tuesday there was market of the most varied goods. In this square bulls were run and games of reeds were made; but also inquisitorial cars of faith were celebrated installing a scaffold for the inquisitors and another one, in front, for the inmates and penitentiates. Perhaps the darkest aspect that would surprise visitors the most would be that criminals were also executed there: tortures, hangings, the ” vile club” … Also in the 19th century, executions were carried out in Zocodover. Various written sources narrate the installation of a gallows and the way of death of various prisoners, ending their bodies mostly in the ” Clavicote” 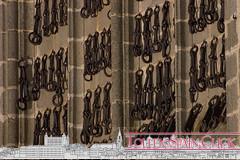 San Juan de los Reyes, built with the aim of being the burial place for the Catholic Monarchs (note its familiar form to a mausoleum) has as remarkable curiosity that on its walls hang (still) numerous iron chains that according to some authors would be the trophies of the victories won in the conquests of Malaga, Almeria, Baeza, Alhama and other squares conquered by the Catholic Monarchs in the area of the Kingdom of Granada. Each of those chains were removed from a Christian captive in these points won and obtained their freedom in the aforementioned wars. Although it is true that today many of these chains are missing, stolen by friends from the outside (a practice that fortunately has ended) and even used years ago, to delimit a walk in the city …

Picota was the small construction that was in the most central places of the populations where the inmates were exhibited for public shame. It usually consisted of a staircase with a small platform with parapets on the sides and a seat at the bottom. Toledo’s pillory was in the most central place: Zocodover Square. Also there was the ” clavicote” , a small deposit, like a cage, that existed in the very centre of the square, where the corpses of those who died in hospitals, without relatives, and of those who drowned, as well as some executed, were exposed. The Confraternity of the Holy Charity invoked public charity there and collected alms to bury them.

I’m sure you’ll also be interested in: Legend of the Toledo Marzipan

Azacanes were certain ” merchants” with donkeys who continually carried water from the Tagus River with pitchers in order to distribute it at a good price through the streets of the city. This water trade arose due to the scarcity of the liquid element in Toledo, in spite of having the river right next to it, but with the added difficulty of the slope and the notable difficulty of opening wells in the hard rock of the Toledo subsoil. This business continues well into the 20th century. As a souvenir, there is still a street with this typical Toledan name, in the Antequeruela neighbourhood. Another profession already lost in Toledo was that of ” Artesillero” . After a flood of the Tagus river, flooding the meadows that surround the city, they go with their small crafts and take the sand deposited by the river once withdrawn, and putting it in water they sieve it until they obtain the material they are looking for, sometimes small pieces of gold of very diverse origin that are sold to silversmiths… More interesting would have been to conserve these pieces, surely all cast and of very diverse nature.

Marzipan . This candy was not invented in Toledo. Centuries before it was already known in Italy and the Arab countries. What is certain is that the degree of excellence achieved in this product in the city is very remarkable, and is currently exported to many countries, as well as being a delicacy much appreciated by the Toledo. Sometimes even known monuments from Toledo have been reproduced using exclusively marzipan. During the Civil War, and due to the shortage of supplies, including sugar, it was replaced by dried figs to sweeten the paste. It is also common to buy marzipan ” eels” of very different sizes at Christmas time. The explanation of the representation of this animal with marzipan has a curious origin: in the Tagus river until the 19th century exquisite eels were bred, very appreciated in the tables of Toledo… Once extinct, the confectioners of Toledo began to reproduce them in marzipan, until today. 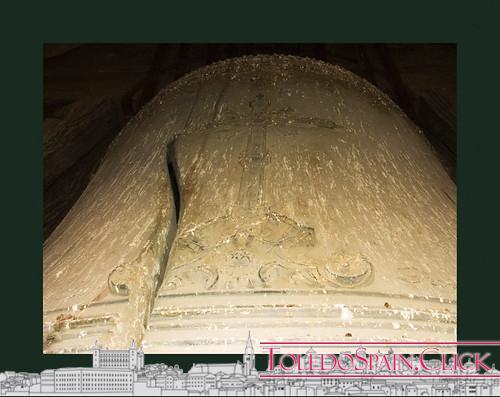 LA CAMPANA GORDA . In the tower of the Cathedral, until not too many years ago you could visit one of the largest bells of all Christianity. Consecrated to Saint Eugene, from its installation the following copla was sung: ” Campana la de Toledo, / Iglesia la de León, / Reloj el de Benavente, / Rollos los de Villalón. It is suspended in the centre of the last vault of the first body of the tower, has 35 feet of circumference, just over 12 inches high and about 11 inches thick, weighing 1543 arrobas. On the ground, fallen is the clapper. On the north-facing side there is a cross with a Virgin of the Tabernacle on top and an initial of the name of Mary on the base; in the west the effigy of Saint Eugene, and in the East a large shield with the arms of the primary cathedral and two smaller ones; it also has five long Latin inscriptions. It narrates the tradition that the first time it was rung was heard from miles away and numerous windows of Toledo were broken by the intense vibration. At present there is also a deep break in one of its sides.

In memory of D. Luis Moreno Nieto , Official chronicler of the Province of Toledo, died at 88 years of age last December 2005 in Toledo. D.E.P.