From the 16th century engravings to the modern postcards and digital photos taken with mobile phones, Toledo has become recognisable for its motley farmhouse on a rock, for the river Tagus that surrounds it and for the unmistakable silhouettes of the Cathedral and the Alcazar.

A building with so much history, it conserves numerous anecdotes and curiosities. Here are some of them. 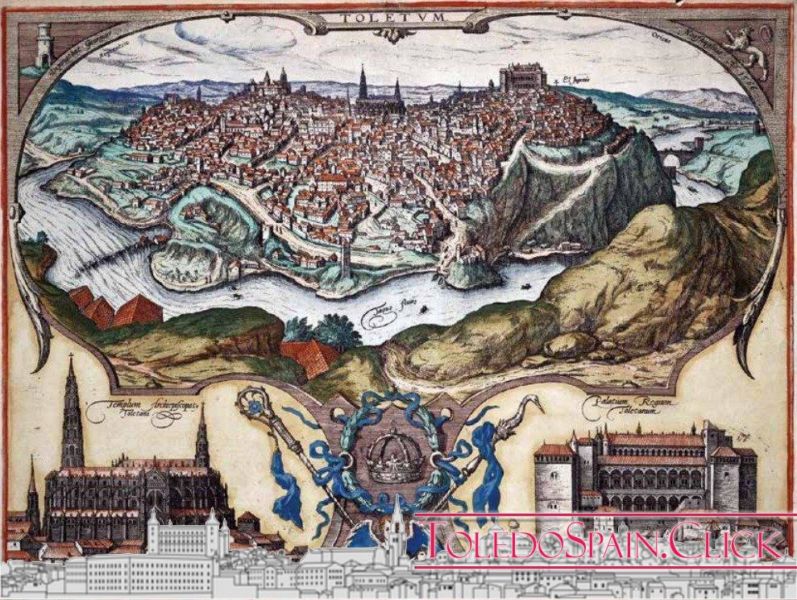 ” The Alcazar is the Toledan monument that has suffered the most from the violent impulses of the History of Spain, from the communal movement to the War of Succession, from Independence to the Civil War. Conflicts, sieges, fires, destructions, succeeded each other turning the Alcazar into a shapeless ruin or a symbol of the official history of the moment. (Martínez Gil, 1998)

Curiosities of the Alcázar: Did you know that in #Toledo there were several Alcázares? That it was an Imperial palace without Emperor, that suffered several fires, bombings or that was visited by the Nazi Himmler… All this and much more in our new article.Click to Tweet

In Toledo there were at least two Alcázares

” The heavily settled village of Toledo is surrounded by
good walls and defended by a well fortified citadel.” This is the
the same description that any chronicler since the 12th century repeats when visiting
Toledo, the same one that suggests the profile with the Alcazar of the XVI well visible.

This citadel, known as ‘al-hizam’ (alphabet) at least
until 1314 it could well also contain the Roman praetorium and then Visigoth.

Probably since Muslim times there were two alcazars in this alficén: one, always called Alcázar would be the one destined to the military garrison, built by Amrús at the end of the 8th century, where it is probable that the famous Jornada del Foso (or Toledan night) took place in 797 (although other authors place it in a small Alcazar located in Montichel).

The only rest is a horseshoe arch that is still preserved in the current Army Museum, in the southern area. The Christian monarchs used it as a residence, Alfonso X being the one who carried out important works. In 1538, the medieval fortress disappeared when the new building was built by Covarrubias.

Horseshoe arch that is still preserved in the current Army Museum, in the southern area.

The other fortress would be located in the place now occupied by the
Museum of Santa Cruz, with public function (throne room) and private housing
of the monarch. It is known as the palace of al-Ma’mun and later as the
Palaces of Galiana. His remains would be the current chapel of Bethlehem and some
capitals and fragments with vegetal themes. (Pérez Higuera, 1984)

Chapel of Belén in the Convent of Santa Fe de Toledo

Where did the inhabitants of the Alcazar get water from?

As a good fortress, the Alcazar should have an ample supply of drinking water to resist possible sieges. As our Alcazar was located on one of the city’s promontories, it had no wells and the most basic supply was in the Tagus, several hundred meters below.

The water was stored in a large cistern and several cisterns.

It came essentially from the river and for centuries various solutions were offered to raise the water from there, passing through the aqueduct in Roman times or the famous ” artifice” of Juanelo Turriano. The enormous rectangular cistern, brick floor with vaulted roof and pointed arches that can now be seen from the Museum was built in the Trastámara period.

In an official report to the King dated 1550, this structure was described as ” a cistern of river water that digs a large amount of water and makes it very good and very fresh” .

An Imperial Palace, without an Emperor.

After the defeat of the commoners, Charles V conceived the transformation of the medieval fortress into a great Renaissance palace that broke with the unstructured elements that had previously shaped the Alcazar.

It is when it takes its definitive aspect, which lasts until today: central courtyard with galleries on arcades, monumental staircase and rectangular plant with four facades joined by enormous towers.

Despite the enormous expense and the presence of the best architects of the time (Covarrubias, Villalpando, Herrera), in 1561 the court left Toledo and did not return except sporadically. The city had an imposing palace devoid of its royal inhabitants.

After the establishment of the court in Madrid, it was only inhabited in 1677 by Mariana of Austria, mother of Charles II and in 1700 by his widow, Mariana of Neoburg. Its history from then on only had pages of decadence: in 1643 it was a prison; in 1710, during the War of Succession, it was set on fire by foreign troops in the service of Archduke Charles; in 1774, Cardinal Lorenzana commissioned Ventura Rodríguez to restore it to become a hospice; in 1810 it burns again during the French occupation; in 1867 it is rebuilt again, installing the Infantry Academy; in 1887 it is burned again and restored; in 1936 it is completely destroyed… (Lorente Toledo, 2004)

Armor in the Toledo Army Museum

Emperor Charles V and the Furor, or ” Charles V dominating the Protestant Furor” (or Turkish) is a sculpture in patinated bronze, representing the Emperor, commissioned by himself to Leone Leoni in Brussels and which he never saw finished (finished in 1564, died in 1558 in Yuste).

As a curiosity, the sculpture has an armor that can be put on and taken off at will , showing the Emperor in two traditions: the armed portrait of Hellenistic origin adopted by Rome and the nude reserved for gods and emperors.

Seeing how the rest of the Alcazar was left, it was a miracle that the sculpture did not end up a mixture of bronze.

Sculpture ” Emperor Charles V and the Furor” in the courtyard of the Alcazar of Toledo in 2019.

Card at the Prado Museum – See the sculpture without armor