Skip to Content
Home Monuments of Toledo The Alcazar of Toledo

One of the most emblematic monumental buildings of the city, narrated in hundreds of stories and described since antiquity. In its long life it has suffered fires, remodeling, bombardments… Between its walls it accumulates great part of the military history of Spain.

It is the most visible building in the city, with its four massive towers on the highest promontory, forming part of any profile of Toledo. Above all, it is a representative building of Spanish Renaissance architecture. 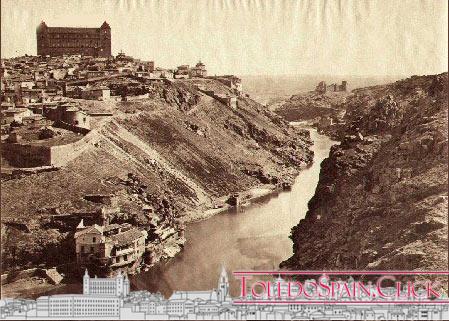 The Alcazar, in an old panoramic view

The Alcázar dominates, imposing, one of the highest hills of the so-called ” old quarter” of the city of Toledo. Since the third century there is evidence of an important Roman palace in this area, from which dominated the large city called by this people as ” Toletum” .

Given the excellent position of this space, its main function from this period was defensive, housing a series of buildings of a purely military nature. The Visigoths also took advantage of this area and the Muslims (711-1085) gave singular importance to this space by creating in this area the so-called ” Alfizén” (Al-Hizan). The latest archaeological research carried out in this area, on the occasion of its adaptation to the Army Museum, provides new data on this period, with notable recovered structures, which will be accessible, and even refers to the fact that ” the hill was given as a present to build the Alcázar, a Christian converted to Islam called Ambrosio” (ABC 22/11/06)

Reconquered Toledo by Alfonso VI, it recovers the space of the Muslim Alfizén, giving it new functions and palatial and courtesan dependencies, which would be incorporated into the merely defensive and warlike ones.

As the border with the Muslim kingdoms moved away from the Tagus, the defensive functions gave way to a series of more courtly structures, and with the Catholic Monarchs, who stayed in Toledo on numerous occasions, the Alcazar was more of a palace for the monarchy than a military site. Even so, it never lost its strategic importance, and during the War of the Communities (1520-23), the Alcazar was once again the object of dispute, first controlled by the forces of Charles I and later by the communards. 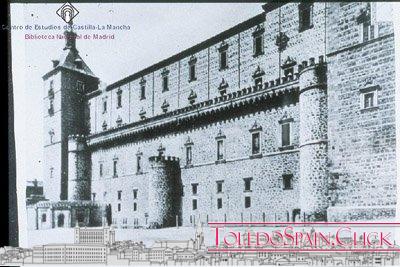 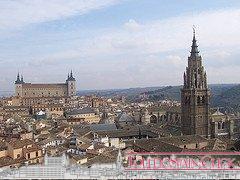 Charles V, a monarch with a great taste for architecture, proposed a new impulse for the degraded building and summoned some of the best architects of the time to build it: Alonso de Covarrubias (north façade), who in 1537 was appointed architect of the building, directing a large part of the works, creating the model of the palace of the Austrias; Villalpando built the central courtyard and stairs, and with Philip II as king, Juan de Herrera built the magnificent south façade. When the emperor decided in 1561 to move the court to Madrid, the Alcázar lost its palatial function and began a period of abandonment and decadence. During this period it became a prison, a cavalry barracks, a residence for the mother and the widow of Charles II…

It did not return to its military function until the War of Succession in the 18th century, when it was once again converted into a barracks by Archduke Charles. As a result of this military function, it suffers a violent fire around 1710, which would not be the only one since in the following century it would be repeated, during the French occupation (1810)

Charles III, in response to the request of Cardinal Lorenzana, gave it to the Church to install a House of Charity there, a period during which it was used to prepare large parts of the building for its new functions.

Towards 1875 the works to adapt the Alcázar as headquarters of the Infantry Academy began, beginning its operation around 1883. 4 years later, in 1887, a new fire seriously affected the building.

Once again restored, it continued its function as an academy until the Civil War, a period in which it suffered a violent siege to which the military who rose up against the Republic and took refuge in it, under the command of Colonel Moscardó, were subjected and which caused an almost total destruction of its structure. Franco, with an important symbolic load for the dictatorship, recovers the Alcázar and in 1961 the reconstruction works are finished and it is reopened with a small museum dedicated to the ” Siege” and some military functions. 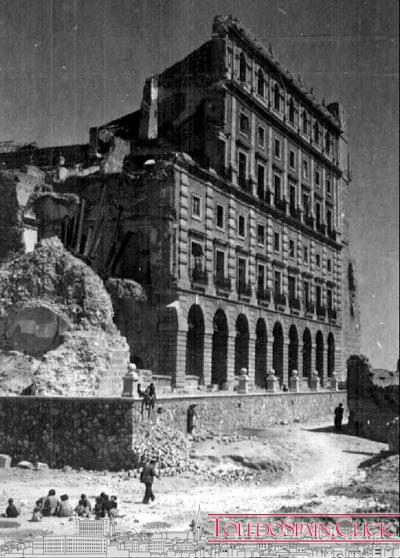 South façade of the Alcázar de Toledo, after the 36th siege

During the current Democratic period (1998), part of the building was adapted to house the ” Biblioteca de Castilla-La Mancha” , which is now fully operational. From then on, the Government of Castilla-La Mancha began to make arrangements in collaboration with the Central Government to house the current ” Army Museum” in the empty rooms of the Alcazar, opening its doors in the summer of 2010.

Curiosities of The Alcazar of Toledo

The Alcázar Toledano has suffered numerous fires throughout its history, some of them have ended up destroying much of the building: 1710, 1810, 1887… 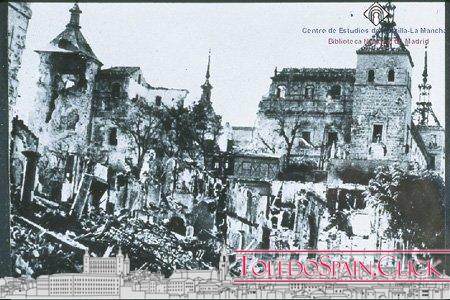 The Alcazar of Toledo, during the Siege in the Spanish Civil War

The Alcazar, palace of Emperor Charles V, owner of half the world, emerges as a mass in front of the Cathedral, the second building that stands out most in the profile of Toledo. Temporal power versus spiritual power, life versus the mole representing death… The symbolism is very strong.

The main entrance of the Alcázar is located on the north façade, the one that made Covarrubias, an authentic work of art little visible due to its orientation.

I’m sure you’re also interested: 50 essential things to do in Toledo (Version 2019)

During the Spanish Civil War, a group of soldiers from the ” national” side barricaded themselves inside the building, which suffered an intense siege by Republican troops from September 21 to 28, 1936. At the height of the siege, a ” mine” destroyed one of the towers. 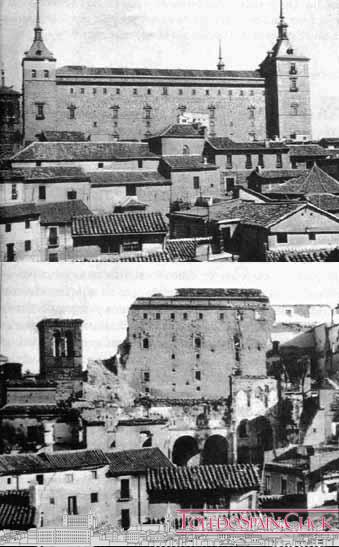 Before and after the Civil War

The Republican troops ended up withdrawing due to the advance of Franco’s troops over Toledo. There are numerous photographic testimonies of those days, as well as videos, and still today some traces of the siege can be observed both in the Alcazar and in certain adjacent buildings.

Until its current remodelling as an Army Museum, the office of General Moscardó could still be visited, as it was after the siege of the Alcázar. In the basements there is a crypt where the survivors of the siege have the right to be buried. The monument was completely rebuilt in the 50s and 60s of the last century as a symbol of Franco’s resistance. Until its reform, it conserved numerous milestones commemorating the resistance of the soldiers besieged there.

Adolf Hitler, during the Second World War, and before the attempt to take Stalingrad, declared ” We will make Stalingrad another Alcazar of Toledo” in reference to the siege and defense that Franco’s troops carried out in this building.

In the remodelling works that have recently been carried out for the extension of the building on the occasion of the adaptation to the Army Museum, interesting archaeological discoveries have been made, as well as protohistoric, Roman, Muslim and transtamarian remains that draw, once again and with more data, the history of this city. And most of them have been preserved so that they can be visited in the new museum that is scheduled to open its doors from next year. As we read in the newspaper ABC dated 22/11/06, ” From the hill occupied by the Alcazar it has been documented that there are remains of the end of protohistory, from the fifth and fourth centuries before Christ. A cistern with a cement lining -which can be visited- and a drain have been discovered from Roman times. Nothing has come from the Visigoths, except two ashlars, but they are on a Muslim wall dating from 802. The most numerous remains from this period, such as multiple ceramics and fragments of reliefs, some with inscriptions” .

There is a collection of interesting photographs about the Civil War on the UCLM server. Click here.

A legend about the Alcazar: Santa Casilda.

The ghost of the Alcazar of Toledo.

Museum of the Army in the Alca…