Skip to Content
Home Monuments of Toledo Mosque of Bab al-Mardum or ” The Christ of Light” .

” El Cristo de la Luz” , a peculiar name for one of the oldest Muslim buildings in the city of Toledo. Built in 999, it houses one of the city’s best-known legends.

Its original name comes from its proximity to the gate of the same name, ” Bab al-Mardum” (walled gate), Bîb al-Mardûm, or Valmardón , and its purpose was to facilitate prayer to those who arrived or left the city.

After the Reconquest, and the entry into Toledo of Alfonso VI accompanied by Rodrigo Diaz de Vivar, the ” CID Campeador” , the building was transformed into a small church, adding an apse (12th century) and being ceded to the Order of San Juan. The current name comes from the crucified Christ that was placed when it was consecrated as a hermitage, and was changed to an image of the Virgin of Light, now disappeared. (Know the legends of the Mosque of El Cristo de la Luz)

Near the church, a few meters almost in the center of the street, you can still see a white stone, which according to legend was the place where the horse of Alfonso VI fell to his knees as he passed in front of this mosque.

Remains of paintings inside the church – photo: pacofinoarchitect

From this period dates the well-known legend of ” The Christ of Light” , which you can read in these pages.

On the southwestern façade, in 1889, an inscription dating from the construction of the mosque was discovered and reads: ” In the name of Allah, he had this mosque erected by Ahmad ibn Hadidi, from his peculiarity, requesting Allah’s ultra-terrestrial reward for it. And it ended with the help of Allah, under the direction of Musa ibn Ali, architect, and Sa´ada, leading to Muharram of the year three hundred and ninety. Unique inscription in Western Islam and Eastern art, for having been made exclusively with fragments of ordinary bricks, and that has facilitated the dating of the building, although some author (Pavón Maldonado, Basilio: ” El Cristo de la Luz de Toledo: Dos supuestas Mezquitas en una” , in Al-Qantara magazine, Arab Studies magazine, no. 21) states that the temple could have been earlier. Recent archaeological research would confirm this antiquity and could even reveal the existence of another building of Roman origin on this same site. 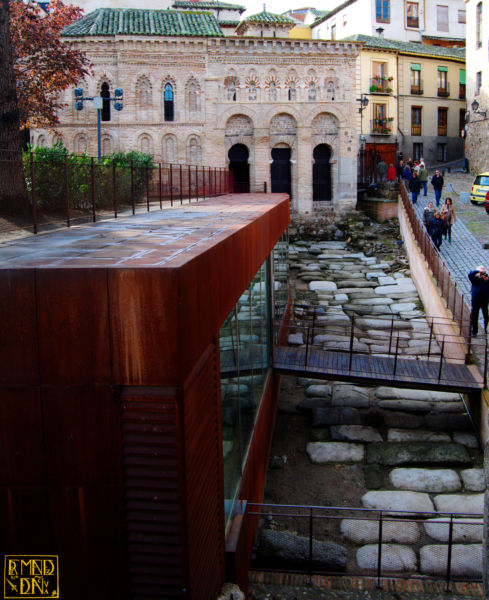 Interior of the building. Photo Gabillo on Flickr.com

The interior stands out in its construction, of small size and that surprises by its vaulted structure. The elevation consists of three bodies, except for the central one, which has four bodies. The columns are in charge of separating the naves that make up the first section, which are related to the horseshoe arches of the second section by means of four reused Visigoth capitals.

The third body is made up of the nine caliphal cross vaults, but the central vault is made up of an element that raises the central quadrant a little more than the rest, thus creating a centralised feeling of the floor plan.

Recent excavations have uncovered the remains of an important five-metre-wide Roman road under which a sewer from the same period also runs. Archaeological studies have also found that beneath the current medieval apse of the Mudejar church there is a second, thicker apse and a cave excavated in the rock, which form part of a building from the Roman period contemporary to the roadway.

Open from Monday to Sunday

Text of interest: ” The exceptionality of the Bab-al Mardum Mosque” by Ana Gómez de Vírgala.

More information about the Mosque in this link.