Located in the heart of the Alficén district, on the site where the convent of San Pedro de las Dueñas used to be, very close to the Plaza de Zocodover and the Alcázar, we find a curious building known as the Museum of Santa Cruz de Toledo, but that in principle it was not conceived as a museum but as a Hospital de la Santa Cruz, under the auspices and at the expense of Cardinal Pedro González de Mendoza, (predecessor of Cisneros) to house foundlings and needy children of the city, with the idea of concentrating in it all the existing little hospitals in Toledo.

Location of the Santa Cruz Museum in Toledo

The name Santa Cruz comes from the fervor that the cardinal had for Santa Elena, which is always represented with a cross in his hand, since according to tradition in the year 327 A.D., he found the true Cross of Jesus Christ and that of the two thieves who accompanied him on Calvary. He had this commitment after having received his son, Emperor Constantine, a warning in a dream that said: ” with the sign of the Cross, you will win” . And from this dream, the Treaty of Milan signed the peace of Constantine in the year 313, allowing Christians to practice their religion until then persecuted.

Cardinal Mendoza always venerated the image of St. Helena with the cross and both on the grandiose front of the Museum and in his tomb in the cathedral are present, becoming almost a second shield of the great cardinal (1428-1495).

Cover of the Museum of Santa Cruz de Toledo

Only with the contemplation of this magnificent plateresque style façade, does it give us an idea of what the interior of the building encloses. It was built at the beginning of the 16th century, after the death of its founder, and we can say that it is one of the main masterpieces of Spanish Renaissance architecture. Its construction followed the norm of other hospital institutions, such as the Florentine palace of Santa Maria la Nuova. Designed from the beginning as a Greek cross of double floor (according to the desire of the cardinal), it has a wide central transept open to the two floors, being able to count in this way with a total of eight bays. It also has an additional room above the entrance hall on the second floor. All the wooden coffered ceilings and two cloisters (one visitable, the other not) are splendid in the same way, giving an air of serenity typical of those found in convents and cathedrals.

Interior naves of the Museum of Santa Cruz in Toledo

Antón and Enrique Egas, who also left their mark on San Juan de los Reyes and the cathedral, participated in the design and subsequent execution of the Hospital; Alonso de Covarrubias was the executor of the spectacular staircase that connects the two floors of the building. It is said that simply contemplating this staircase, the cloisters or the grandiose façade is worth seeing this Hospital-Museum.

Staircase of the Museum of Santa Cruz in Toledo

This place was chosen as the location of the Hospital, because it was farther away from the large concentrations of population to avoid possible epidemics or contagions and because it enjoyed favourable winds coming from the north and also enjoyed splendid views towards the Tagus.

From the beginning, the government of the Hospital depended directly on the Cabildo-Catedral, in charge of appointing a new rector annually with the right to housing.

Little by little it became a great children’s hospice, many of the children were picked up in the cathedral in front of a column near St. Peter’s chapel.

Newborns were breastfed by nursing mothers who often came from nearby villages. As they grew older, they became part of the hospital institution; the boys could learn a trade and the girls stayed here until they got married or were part of the domestic service.

It is not appropriate in this article to make an extensive description of all the details of the Hospital de Santa Cruz, but it is obligatory to stop at the Plateresque façade because its profuse decoration requires it.

In the columns of the lower part, we can see the four cardinal virtues: prudence, temperance, fortitude and justice.

In the great tympanum is distinguished the image of Santa Elena with the Cross and Cardinal Mendoza kneeling, flanked by San Pedro and San Pablo and two acolytes to the left and right that carry the cardinal chapel and the mitre of Mendoza.

In the upper part the images that represent San Joaquin and Santa Ana symbolizing the Conception of Mary with a chaste embrace stand out, both guarded by the theological virtues Faith and Hope. Charity is highlighted in the key of the eardrum, thus symbolizing the meaning of the Hospital. Mendoza’s coat of arms is also visible on the lintel.

After passing through the grandiose façade, we enter a hallway topped with Gothic vaults, which has three doors giving access to the rooms, the courtyard to be visited and the administrative units of the Hospital. When the disentailment arrived in 1836, it was the Municipal Beneficence the one that took charge of continuing during a time with the work for which it was created but in 1846 the General Military College was installed here. Having been declared a historical monument in 1902, all the Provincial Museum collections were transferred here in 1919 and finally in 1930 it was inaugurated as the Museum of Santa Cruz, after several restorations to adapt it to its new purpose. During the Civil War, it suffered important damages still visible, since it served as barracks, jail and parapet. At this time it suffered a real plundering of its works. Towards the middle of the 20th century, a new restoration was carried out. 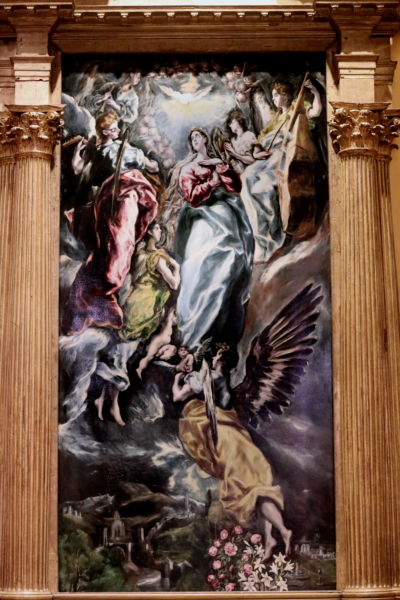 Cover photo of the Museum of Santa Cruz during the Civil War. Because of its proximity to the Alcazar, it was used as a barracks by Republican troops and as a target for the shots fired by the soldiers besieged in the Alcazar. Fountain: Toledo Forgotten.

The collection of the Museum of Santa Cruz is very extensive and of great quality, in painting, archaeology, sculpture, furniture, goldsmithery, rich tapestries, etc. As it is a Provincial Museum, everything that is discovered in excavations and restorations comes to an end here and there are innumerable pieces in addition to the deposits of the various parishes of the diocese and even the Primate Cathedral. To mention a few, I must highlight the tapestry of the Astrolabes and the banner of the battle of Lepanto, given by Don Juan de Austria to the cathedral of Toledo. Unfortunately the apothecary was not preserved, which must have had a precious botamen, however for a few years we can visit the collection Carranza consisting of works and pieces of unique ceramics and great value.

Patio of the Museum of Santa Cruz

There have been important exhibitions such as Carolus (2000-2001), El Greco (2014) and more recently those of Spanish Sacred Art and the Spain of the Austrias among many others.