The ” cambrón” is a thorny shrub that grew very close to the place occupied by this door, entrance to the old Jewish quarter of Toledo in the northwest zone. Do you want to know the history and curiosities of the Door of the Cambrón de Toledo?

” There by the Miradero, by the Cambrón and Bisagra, confusing herd of people from the Tajo, to the Vega baja.” ¹

Already mentioned by Don José Zorrilla in his work ” A buen juez mejor testigo” , the Puerta del Cambrón de Toledo has been a silent witness of many events in the city and is today one of the most curious monuments in Toledo not only because of its name, but also because of its solid construction and its history. Also known as ” of the Jews” (because it is the main entrance to Toledo’s Jewish quarter) and ” of Santa Leocadia“” (because it was dedicated to this saint after its reconstruction after the expulsion of the Jews, 1492). The most certain is that it owes its name to the growth of a spiny bush ” lycium europaeum” in the surroundings and even in the ruins of its towers prior to the last reconstructions between 1570 and 1577.

It is a splendid fortress in pure Renaissance style, with a large parade ground, four solid towers topped with slate spikes and two arches, built mostly in stone and brick. The main master builders were Hernán González, Diego Velasco and the figure of Santa Leocadia (to whom this door is dedicated) is due to Juan Bautista Monegro. Above the image of the Saint, we can see the coat of arms of Philip II, on the interior façade. On the exterior façade we see the same royal coat of arms flanked by two seated figures of Goths kings.

I’m sure you’re also interested: El Greco and his hieroglyphics

Like San Juan de los Reyes, the Puerta del Cambrón suffered significant damage in the War of Independence as well as in our Civil War. But now, both the aforementioned monastery and the Gate itself, together with the palace of the Dukes of Maqueda, form one of the widest and most colourful environments in our city, with the traffic that supports this environment on a daily basis being one of the main conservation problems.

Unfortunately, the same thing was not done in this complex as in Bisagra, that is to say, there were two openings to the left and right to serve as entrances and exits to the numerous passages of vehicles, including trucks and buses or, failing that, to have widened the descent of San Martín so that this road could have a double sense. Sooner or later this problem will have serious consequences for this singular monument, do not doubt it. It is curious to see the astonished face of the tourists and the endless number of photographs taken when they see that a big bus slips through the arches of the fortress. The expertise of the drivers does not leave indifferent to those who observe it because there are not more than five centimeters on each side and is really commendable.

Although it is of Muslim origin, the Roman and Visigoth remains found throughout the complex and which were reused show us that there must have been a more or less important access in this place and, as with other ” doors” , it is at the end of a considerable slope or valley, so as I explained in other chapters, these accesses also served as the city’s drainage in the event of major storms and just like the other passages, was closed at dusk when the Ave María bell rang in the cathedral and was opened at dawn with the ringing of the San Antolín bell, the religious of Santa Clara guarding their keys, the warden took charge of this mission, whose dwelling was inside the enclosure and who was also responsible for collecting the portage tax, from which the neighbours of Toledo, its mountains and its jurisdiction were free, according to the plaque that also reads here in the parade ground. Today, the Montes de Toledo Culturel Association is located in this house. 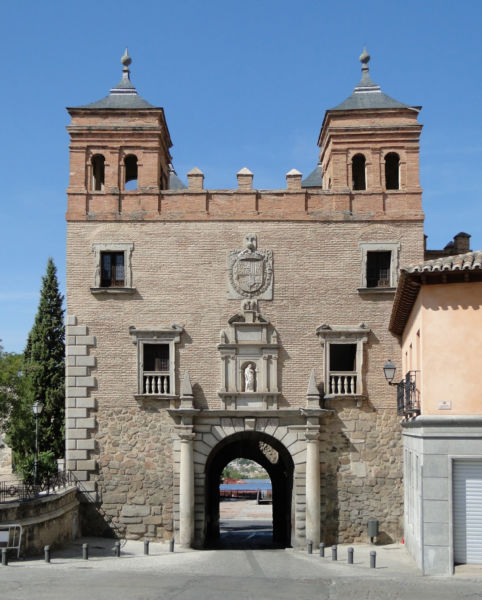 Something that I recommend to anyone reading this article is to contemplate, at least once, as in the early hours of Thursday to Good Friday, the Cristo de la Vega crosses the Puerta del Cambrón on the shoulders of his sackracks before entering the zigzag that returns him to his hermitage. It is one of the emotive moments of the Holy Week in Toledo in which it seems that the Holy Christ of the ” oath” , it is difficult to leave the city by the procession has been for hours and does not want to return to its basilica, when it finally manages to cross, the full moon of Holy Thursday ² awaits in the firmament to illuminate the last stretch of its journey with its clear and fascinating light to bathe the Moon.

Splendid indeed the Door of the Cambrón, I encourage you that when you pass through there you stop for a moment in its various details.

¹ A good judge, a better witness. Legend of Christ of the Vega. JOSE ZORRILLA.

² Holy Thursday must coincide with the first full moon of spring.

Historical photos of the Puerta del Cambrón of the Blog ” Toledo Olvidado” .