When in the route ” Toledo monumental” , we cross the Cathedral of Santa Maria, sometimes we stop in a certain personage that on horseback appears majestically painted on the keystone of the central arch of the entrance to the chapel of San Ildefonso, just in front of the Transparent. It is nothing more and nothing less than the image of the mayor of Toledo, Esteban Illán (Toledo 1151-1208), a Mozarabic knight, who went down in history for defending Alfonso VIII ” el de las Navas” .

The chronicles say that Esteban Illán, son of the bailiff and also mayor of Toledo Don Illán Pérez, was a supporter of one of the most important noble families in Toledo at the time: the Lara family, who in those years of the 12th century were openly confronting another important lineage such as the Castro family, defenders of the ascent to the throne of Fernando II de León, that is to say the uncle of Alfonso VIII. 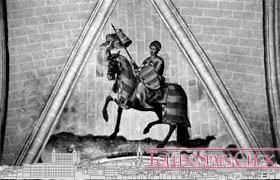 Painting by Esteban Illán in Toledo Cathedral, in front of the Transparent (Source: RealAcademiaToledo.es)

Various authors from Toledo tell us about a beautiful church located on one of the highest hills of Toledo; the church of San Román, now the Museum of Visigoth Councils and Art, precisely another of the enclaves that we visit on our route of ” Monumental Toledo” and where the burial of our protagonist is located. The importance of San Román, in the life and biography of Esteban Illán himself, is such that we not only cite it because it was his parish and burial place, but also because the tower of San Román will go down in Toledo’s history as the place where Esteban Illán himself, exactly 850 years ago today, would proclaim from the top of it the young King Alfonso VIII. According to the texts of the time, during the early hours of 26 August 1166, Illán climbed to the top of San Román to the little Alfonso, and from there shouted to the four winds the famous phrase: ” Toledo, Toledo, Toledo por el Rey Alfonso VIII” (Toledo, Toledo for King Alfonso VIII). The king’s banners waved from the tower, the knights followers of the Castros fought bravely with the knights related to the Lara and finally defeated the latter, confirming the proclamation of Alfonso VIII as king of Castile. Just in front of the aforementioned church and tower of San Román is the so-called ” Casa de Mesa” , not only famous for the Mudejar lounge it possesses or for having been the seat of the Royal Academy of Fine Arts and Historical Sciences of Toledo, until just a few months ago, but also because it was the family home of Esteban Illán. In addition, this interesting building was also visited during some periods of the 16th century by a saint and doctor of the church: Santa Teresa de Jesús, who on her visits to Luisa de la Cerda, would also inhabit this important enclave in Toledo.

Esteban Illán, some time after the proclamation of Alfonso VIII, obtained the King’s reward, since in addition to the office of Mayor Toledo, Illán probably obtained two important estates as a reward, one the Ventosilla and the other close to the first called the Comenar. He also owned an inn in the district of Los Francos, a very commercial area in the Toledo of the 12th century, a shop in the Regachuelo stream, modernly called Aryo de la Rosa, and an inn in the same Plaza de Zocodover.

Most of the authors agree that the main reason why Esteban Illán’s equestrian image was painted in Toledo’s Cathedral was due to the fact that thanks to him Alfonso VIII was able to withdraw a tax that he imposed on the Toledo people and that did not conform to law. In gratitude for his tenacity, certain donations made to the cathedral and the defence of the rights of the Toledans, it was decided to immortalize our mayor, Illán, on the walls of the most beloved temple in the city. It is true that something would also influence the fact that two of Esteban Illán’s sons were a deán and an archdeacon. Curiously enough, the equestrian painting that we observe today of our mayor Illán is not the original one, since when the Transparent was built (1729) it had to be destroyed, being by order of the Cabildo painted later in the immediate vault, and possibly executed by the same author of the Transparent, that is to say Narciso Tomé.

It is curious to point out how Esteban Illán’s fame also relates him to the magical world, since some sources point out that our mayor could have been the famous magician Illán, of Count Lucanor, who was said to ” know more about demons than the Demon himself” . Once again another confirmation that Toledo is a magical, special city…

Gothic doorway in the street of the City, in front of the City Council of Toledo, where we can see the shield of the Toledo, identical to the one located in the Cathedral, in the painting of Esteban Illán

Esteban Illán died on November 11, 1208, as indicated by the Anales Toledanos.

Today, we remember that dawn and those words that served to proclaim our king Alfonso VIII as king of Castile, from the always majestic tower of San Román.

Tower of the Church of San Román.