Surely the most remembered character in medieval Toledo, after the Reconquest, was the Mozarabic knight Esteban Illán. Of the illustrious Toledans, it is the oldest that has a portrait inside the Cathedral, very close to the ” transparent” , the original place of the portrait.

The young Alfonso VIII, heir to the throne of Castile had a complex reign from the beginning. Numerous intrigues of the nobility who wanted the royal power, even by his uncle, Fernando II de León, would propitiate notable adventures like the clandestine exit of the besieged Atienza, disguised, until his legendary coronation in the Toledo tower of San Román.

Towards the last third of the 12th century, when a large part of our character’s life took place, Toledo was divided into two factions: the supporters of the Leonese king, and the Lara, guardians of the little king, who supported his legitimacy. In between, as on numerous occasions, the city as a battleground and a place of not a few scuffles. Interior of the Church of San Román

Esteban Illan, according to the chronicles, was a supporter of the Lara. In turn, Illán was the son of D. Illán Pétrez (or Pérez), who appears around 1161 as mayor of the city. It narrates the tradition, which in the early hours of 26 August 1166, brings the young Alfonso to Toledo and hides him in the tower of the church of San Román, of which documents are conserved stating that he himself had paid by taking advantage of a previous Muslim minaret. The choice is not random, as well as being in some way ” his property” , is also very close to his residence, the current ” Casa de Mesa” . Of the aforementioned church, we will say that it is dedicated to San Román, monk and martyr of whom it is said that the relic of his language was conserved here, which after being cut continued praising the faith of Christ before his executioners… It also says here the tradition that San Ildefonso was baptized. D. Esteban Illán is also buried there, in the old chapel on the side of the epistle, as Cardinal Lorenzana already pointed out in a handwritten note from Francisco de Pisa’s book ” Apuntamientos para la Segunda Parte de la History of Toledo” , where he says: ” Here is buried the enlightened Esteban de Illán, and other illustrious mui cavalleros” , because it is true that there are still many sepulchres there, most of the 13th century. Also notable are the paintings of their vaults, with themes such as the evangelists, original sin, Paradise and the resurrection of the dead (where you can see how their sarcophagi leave their souls in sorrow)

It is at this moment of exaltation, and with much of the people of Toledo observing the event, when little Alfonso is proclaimed King of Castile, and their banners are hoisted at the top of the tower. Tradition has it that many residents of Toledo came armed, from one faction and another at the foot of San Román. After once again engaging in battle, the followers of both sides win the supporters of the proclaimed king and the defeated flee to Huete, where they take refuge.

This tradition tells that on 26 August 1166, the King of Castile was proclaimed from the tower to the cry of ” Toledo, Toledo, Toledo by King Alfonso VIII” , a phrase used later to proclaim not a few kings.

Thanks to the bet made, Esteban Illán did not take long to make his gesture profitable. In 1166 he was proclaimed bailiff-mayor of the city, a position in which he remained until his death in 1208. Even the monarch quotes our character in his will, so that ” it will be notorious to everyone how I have received many marvels from Esteban Illán, mayor of Toledo” , since he also served as lender of the crown. A good part of the properties obtained during his life come from royal donations. 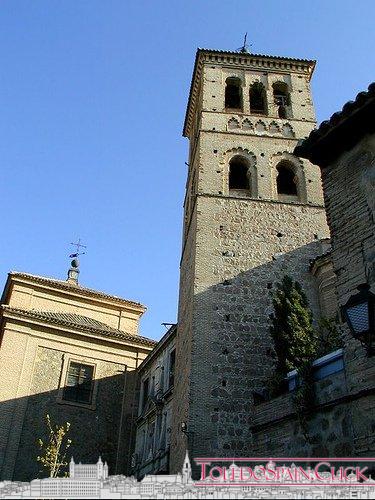 Tower of the Church of San Román

Also the aforementioned presence of the effigy on horseback of Esteban Illán in the Cathedral ” is not free” . In addition to the notoriety achieved by this character at the time of the beginning of the cathedral work, he did not hesitate to face his own king demanding the withdrawal of a certain tax that the monarch himself intended to charge to the city of Toledo, forcing Alfonso to rectify himself. This seems to be the reason why the town council placed his portrait in the cathedral, in the first place where the transparent is today and, once built, it is reproduced in a nearby vault, until today.

This notoriety, and his presence in the Cathedral do not identify our character with the ” fame” that in certain writings is attributed to him. Of notable ” necromancer” it would be the softest thing that Illán receives in not few texts. Many also claim to see in Don Juan Manuel’s famous work, ” El Conde Lucanor” , in the XI Story entitled ” Lo que sucedió a un deán de Santiago con don Illán, el mago de Toledo” , the person of our Don Esteban, assigning him as the magician to whom the Deán, eager to learn the ” toledana arts” visits… Some even claim that this character ” knew more about demons than the Demon himself” . Possibly the author of ” El Conde Lucanor” was inspired by the fame that Esteban Illán had in the Middle Ages in the city of Toledo, and had the good fortune to immortalize certain popular voices that assigned to this person the label of ” magician” or ” necromancer” , and connoisseur of the arts that would have facilitated him how many riches he got in life, or to some of his descendants, who were not few.

I’m sure you’re also interested in: Witches and Sorceresses of Magic Toledo