Rome and Toledo have many similarities. As a city, they sit on seven hills; they are furrowed by a river that endows them with a marked character, and for millennia they have housed very important civilizations.

Since Fulbio Nobilior conquered the primitive city now called Toledo, the most important population nucleus of the area was renamed Toletum.

Numerous are the remains that this civilization left in the surroundings of the current city, a circus, an amphitheater, a naumaquia (pond to simulate naval battles), a bridge and an imposing aqueduct, remains of several roads, walls (like those in the Museum of Santa Cruz), sewers, thermal baths… It is enough to give an idea of the magnificent constructions that Toledo had at this time to observe the objects and magnificent mosaics of the Archaeological Museum.

Recreation of the Toledo Aqueduct according to Rey Pastor (Source: Eduardoasb on Flickr.com)

As D. Luis Moreno Nieto states in his book ” Toledo, sucesos, anécdotas y curiosidades” (Ed. Zocodover), ” From ancient comes the saying in stories and descriptions that between the two Romas, that of the Tiber and that of the Tagus – or western -, there are points of similarity and it has even been affirmed that some details of the city carpetana were copied from the capital of the Roman Empire” .

This is how we see it consigned in the History of Toledo by Martín Gamero, who takes it from that of the Count of Mora, inspired by the romantic descriptions of Father Román de la Higuera, reputed to be a dreamer and inaccurate.

Toledo, during the Roman domination, without becoming as exaggerated as Martin Gamero, if it was an important city in the imperial framework. He enjoyed Proconsules, Magistrates, privileges, monuments, legion, roads, public offices, imposing the language (Latin), customs and Roman pagan beliefs in secution of the Celtiberian language and rudimentary prehistoric rites and ceremonies, and it is logical to think that names, people, places, took in image and likeness the characteristics of the capital of the Empire, names and customs that disappeared with the arrival of the Visigoths, but that it is not utopian to reconstruct.

A relation that makes D. Luis Moreno of places of the ancient Rome that had and have their similarities in the Hispanic Toledo are:

– Arch of the New Quarter or of the Jewish Quarter.

was dedicated to Hercules.

It is also worth mentioning that Rome is said to be the city of the seven hills, because on them was raised (Capitoline, Palatine, Quirinal Mountains…) Toledo, without dispute, had in its days as lady of the world, its Palatine Mountains, Citorio, Capitoline, Celio, Thermal, Aquilino, Viminal and Testaceo. Names given to places now known as San Román, Montichel, Cerro del Alcázar…

There is therefore an abundance of archaeological remains of Roman origin in Toledo that testify to more than six centuries of Roman domination. In Zocodover, under the walls of the Alcazar, in the mosque of Tornerías, in the streets of San Ginés (remember the famous caves of Hercules), Amador de los Ríos, the Bab al-Mardúm gateway there are ashlars from the conduction of water, Or do they think that during the Middle Ages they dedicated themselves to building walls by chopping down the very large number of blocks that make them up, or the stones of palaces, castles and convents that cover present-day Toledo… Most of them are remains of these ashlars, of the old aqueduct, of the temple of Jupiter in Toledo, of the looting of the Roman circus… Nothing was respected.

Outside the walled enclosure there are still some vestiges of this glorious period: the aqueduct (see romantic representation on this page), the circus, the two carriageways, the amphitheatre and the bridge that the Arabs later called Al-Qantara, apart from a necropolis and not a few sumptuous villas that, as we said, mark out the Tagus (Vega Baja, Vinagra, Mazarracín, Paseo de la Rosa…).

Romantic image of the aqueduct that once crossed the Tagus to bring water to the inhabitants of Roman Toledo. Today, only the aqueduct’s starting points remain. 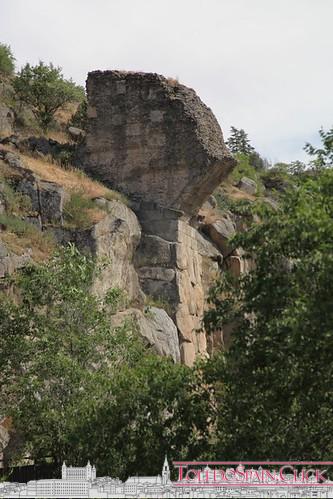 Remains of the Roman Aqueduct in Toledo (Photo: Toledo Imperial City on Flickr.com)

The importance, then, of the Roman Toletum was remarkable… It should only be remembered that Toledo once housed a circus with a capacity for 13,000 spectators and a 38-kilometre canal was built with a 21-metre-high dam so that the water could reach Toledo from Mazarambroz…

As D. Luis Moreno Nieto rightly states, ” Although ruined, the circus is among all the buildings that remind the Romans of the best known of the Toledans, many of whom look and row those noble and ancient argamasas with a gesture of perplexity…” .