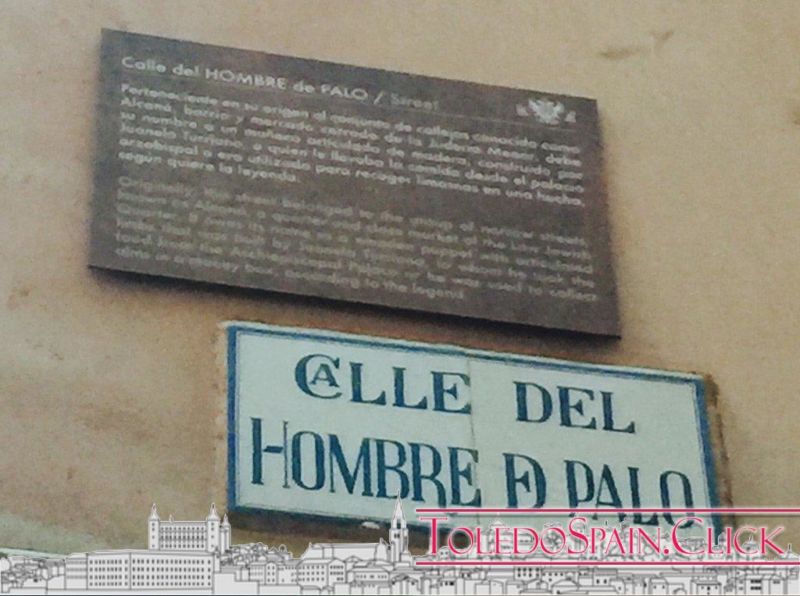 Summer is a great time to introduce the youngest children to the history and culture of a city like Toledo. A good starting point can be certain curiosities that populate our streets (in Toledo there are many). Today we adapt what may not be strictly a legend, but it does contain certain legendary dyes that will help to bring to the youngest the knowledge of an interesting historical period and some important people who lived in our city, in the sixteenth century.

Maria was trying to find a place for herself among the group of people who gathered in a corner of her street. She could hear exclamations such as ” it is the work of the evil one” , it is a ” wonder” , ” the king’s watchmaker has done it” , but she did not understand very well what they meant. When a place could be made, because it was small, his eyes did not give credit to what they saw…

She had left her house just outside the Cathedral a few hours ago. At the age of nine, Maria followed her mother’s instructions every day, going to a nearby fountain to fill a pitcher of water that she jealously carried home. If there were a lot of people in the fountain or it was dry because of the summer, she had to go down to the river… It was a rather heavy job for a little girl, she had to stop every few steps on the hard slopes, but she had to do it, because the water was very important for the whole family and in Toledo it was scarce. Her father had told her that in this city it had always been difficult in summer to get water, that in other towns and cities there were more wells, or the river was closer… Also that, in the palace, Our Lord King Philip II had ” running water” thanks to a curious artifice that she herself had seen work, seeming to be a work of magic because the water rose from the river without any help.

When the intense heat of midday made it difficult to walk through the cobblestone streets of Toledo, she returned home after many other errands… Nearby, under the shadow of the walls of the Cathedral, she was surprised by a group of people exclaiming around something she could not see. When a hole could be made, she could see a doll, made of wood, similar but larger than the ones her father carved for her when she was a child to play at home. But there was something different… When one of the men who was there approached and threw a coin into a small box in his hands, the doll seemed to come to life suddenly, and with a few sudden movements he bent his head slightly, waved an arm as if in greeting and opened and closed his mouth, making no sound, but appearing to be thankful.

Every time this happened people were startled, some exclaimed and others laughed as if it was a fairground attraction. Never before had such a thing been seen in the streets of Toledo!

He ran home, climbing the stairs quickly in search of his mother, to tell her what he had seen. The two went down the street again to observe this prodigy, but they could only see a man with a white beard, an old man, picking up the doll in his arms and leaving. A neighbour who was also there commented that it was Juanelo Turriano, the old watchmaker of the Emperor, Mathematician Major of the present King and that for some years he had fallen into disgrace for certain lawsuits with powerful lords and with the municipality. It was the same man who had built the ” artifice” that rose water from the river! And according to another neighbour, he told many other prodigies that none of us could understand.(Leyendasdetoledo.com)

Day after day, Juanelo placed his doll in a very busy corner of the street. Many people who passed by, on their way to the Cathedral, just to see the wonder work, deposited some coins in the box, activating the almost magical springs that made the doll, which they began to call ” the Man of the Stick” move. For Maria it was incomprehensible that a doll would move on its own and others would look for a rope or look around the doll in case someone in hiding made it work. Some religious who passed by exclaimed that he did not understand how such a work of evil could be exhibited so close to the Cathedral…

One morning, an intense smell of smoke alerted the entire neighborhood. The fire was very dangerous in Toledo, due to the scarcity of water, the narrow streets and the proximity of the houses, most of which were made of wood. Everyone, including Maria, ran to the street to see what was happening. In the last corner occupied by the ” Man of the Stick” there was only a shapeless mass of ash and metals… Someone had burned the ” Man of the Stick” .

No one dared to ask what had happened to Juanelo’s automaton. Many years later it became known that the Inquisition had burned the doll that had attracted so much attention. Too close to the Cathedral, perhaps too advanced for its time. The intransigence, ignorance and above all the mistreatment of our land towards the great geniuses who have inhabited here, once again had a partial triumph… In a few years, this old Toledo street would be known as ” Hombre de Palo” , in memory of that automaton and its creator, unjustly treated by the Imperial City.

Many streets, monuments and corners of Toledo keep curious stories and legends accumulated over centuries. If you want to know why this street is called this curious way, and you have read the previous legend now we tell you what the History says:

In the 16th century an important Italian engineer and inventor lived for some years in Toledo. His name was Juanelo Turriano (in Italian Giovanni Torriani) . So important was he that we inevitably have to compare him to another known and important Renaissance man such as Leonardo da Vinci . Although less well known, Juanelo worked for many years as a watchmaker in the Court of the Emperor Charles V (Toledo at that time was the capital of the Empire). 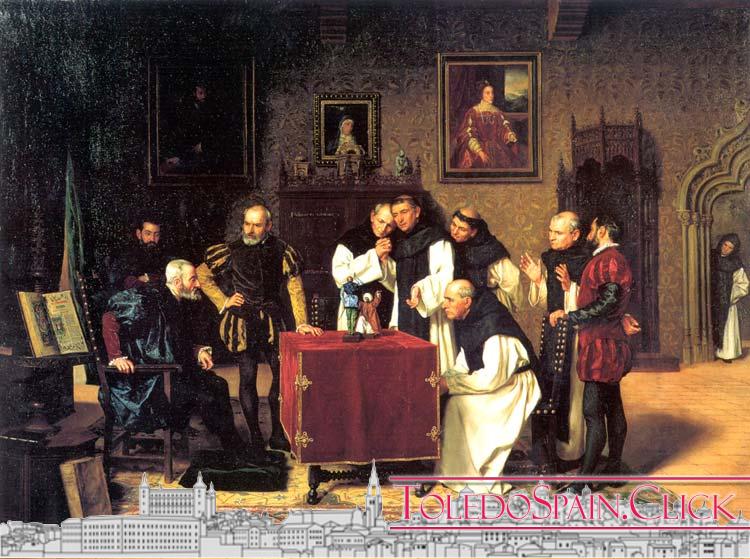 Miguel Jadraque y Sánchez de Ocaña (1840-1919): ” Carlos V en Yuste” . Juanelo Turriano can be seen standing with a white beard next to the Emperor, who is seated to the left. This painting depicts the moment when Juanelo shows the operation of an automaton to the Emperor and monks of the Monastery of Yuste, where Charles V spent his last days. The automaton consists of two figures, a soldier hitting an Ottoman Turk with his sword, something that surely pleased the Emperor quite a lot. (Source)

A trade that now might seem quite normal to us but at that time required a series of skills and knowledge that were not available to anyone. Later, Philip II named him Major Mathematician and it was during this time when he built an ingenious machine, an ” artifice” (he actually built two), that allowed the water to rise from the Tagus River to the Alcazar, saving a significant difference in level of 90 meters, when there was still no running water as we know it today (taps and fountains in every house, etc.) in the city of Toledo. Unfortunately, and after a life full of great inventions and technically advanced ingenuity for his time, Juanelo died being very poor and with enormous debts on June 13, 1585 in Toledo.

And why are we telling you all this? 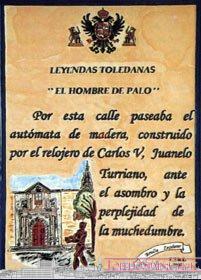 The street ” Hombre de Palo” receives this name due to a kind of doll (some call it an automaton) in the shape of a man that Juanelo Turriano built using his extensive experience as a watchmaker with the possible aim of raising some money before the ruin that for him had meant the construction of his two great ” artifices” that allowed the water to rise to Toledo from the Tagus, and of which he never charged practically anything…

The wooden doll that according to some authors of the time walked along this street, moved arms and legs, or bowed when someone threw a coin into a small box that he carried in his hands, ended up naming the street, so curious of its presence there. Numerous people, even from nearby towns, came to this street to get to know the new wonder of the Italian inventor.

Imagine the people who passed through that street, more than 500 years ago, when there were no ” robots” , no articulated and automatic dolls today, that move with electricity… At that time electricity was not known; all the movement of this doll was done by means of complex hidden mechanisms, like a large clock.

Legend has it that Juanelo Turriano’s ” Palo Man” was burned by the Inquisition , to avoid the excitement and fascination that such a peculiar character caused in the residents and visitors of Toledo.

Juanelo made more similar ” automatons” , although smaller in size, in this video you can see one that is believed to have been made by Juanelo Turriano and is preserved in a museum in the United States:

In this magnificent animated video created by the Colegio Divina Pastora de Toledo you can learn about the history of Juanelo Turriano and his inventions, including the Hombre de Palo:

Juanelo Turriano was one of the most renowned engineers of the 16th century. Among his numerous inventions and technical advances, we can highlight the ” artifice” that facilitated the ascent of waters from the Tagus to the Alcázar, the famous ” Crystalline” that he made for Felipe II, numerous clocks and mechanical artifacts, the bells of El Escorial, contributions to the Gregorian Calendar, etc. Children can be introduced to the study of the period and the importance of the characters related to the legend of the ” Palo Man” and the life of Juanelo: Carlos V, Felipe II, Juan de Herrera, etc.

In the ICT field, current systems LEGO could be used to simulate the creation of an automaton similar to the ” Palo Man” in the classroom, just as Juanelo did in the 16th century. If someone cheers up and takes him to the street Hombre de P…