More than thirty years had passed since the bridge was badly damaged during the disputes between Pedro el Cruel and Enrique de Trastámara, when Archbishop Tenorio decided to undertake an ambitious reform of the work and sent for the best architect of the time…

” THE WOMAN OF THE ARCHITECT”

Legend of the Bridge of San Martín

(Also known as ” The Woman of Alarife” ) 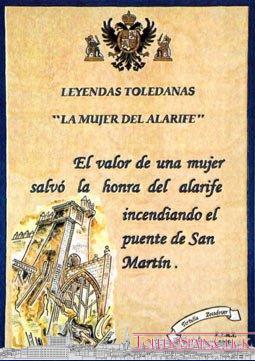 The bridge of San Martín, which once served as access to one of the entrance gates to the Toledan wall, was built in the 13th century to replace another below, whose remains are still visible and which was destroyed by a great Tagus flood (it is located in the place known as La Cava, the site of another known Toledan legend)

The building, which had to be restored frequently in later centuries, is listed as a good example of military architecture of the time. It is reached from the area known as ” la Coracha” , a military term from the Middle Ages that came from the Arab (like so many other places in Toledo) with what was known as the rampart of the wall or walled curtain that, coming out of it, usually from an advanced area started in two until it reached a river or precipice in such a way that it prevented the entire site of a city and allowed those under siege to reach a water source. This bridge has robust towers, as well as graceful arches that save the riverbed. Above the central keystone of one of them, in a hollow covered by vegetation that has grown spontaneously in the cracks of the stones, is a niche that keeps the carving of a woman, protagonist of a beautiful legend.

More than thirty years had passed since the bridge was badly damaged during the disputes between Pedro el Cruel and Enrique de Trastámara, when Archbishop Tenorio decided to undertake an ambitious reform of the work and sent for the best architect of the time, who soon arrived in the city and began his task with true passion. 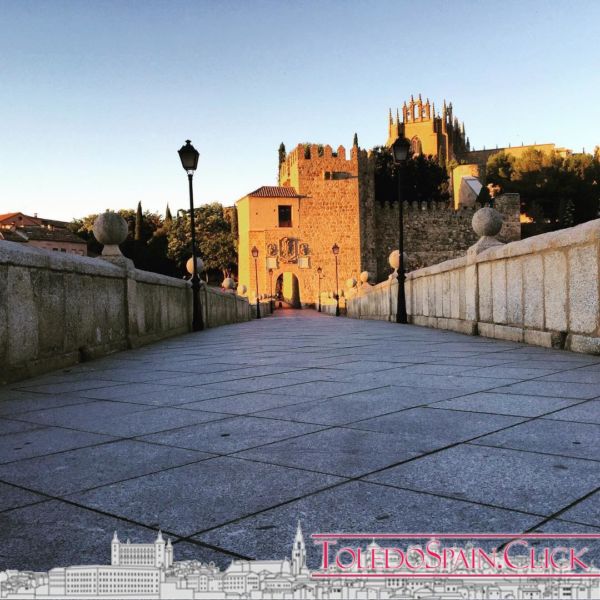 The hard work of the workers and the support of the Toledans, eager to see the building finished, brought about the day when the building was coming to an end. But the evening before the date on which the scaffolding was to be removed, the architect was very worried, and when night came, he left his house without wanting to give any explanation, despite his wife’s questions.

When he returned he was pale as a dead man and locked himself in his studio crying disconsolately. At the insistence of his wife, he finally agreed to explain that he had made a very serious error of calculation, and that the moment the scaffolding was removed to inaugurate the bridge, it would collapse with everyone on it. Nor was he able to go to the archbishop to tell him what had happened because the news would spread throughout the kingdom and he would never find work again. After his confession, he continued to weep bitterly and the woman spent some thoughtful time until, with great resolution and seeing all his future and that of his family in question, he took a tea and left the house.

It was a stormy night, and hiding from stretch to stretch, the architect’s wife managed to get to the bridge and, trembling with fear, lit the fire and threw it on the woods that served as a framework. At first it seemed that the rain was going to extinguish the fire, but at last it spread and the woman returned home leaving behind the scaffolding wrapped in flames.

A while later, the Toledans could hear a great roar that they at first attributed to the storm. But the next day they saw with great disappointment that all the woods had been burned and the bridge had collapsed over the river. Naturally, they thought that the fault had been of some lightning and, immediately, the archbishop entrusted to the architect that they will begin again the works, which were concluded with perfect calculations.

Bridge of San Martín, in Toledo 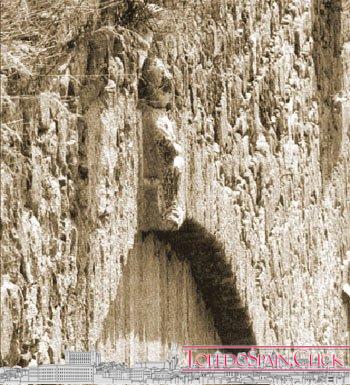 Statue associated with the legend ” The architect’s wife” , in the Bridge of San Martín.

After the inauguration, the architect’s wife, who did not have a very clear conscience, asked the archbishop for an audience and told him what had happened. The prelate, surprised by the courage and nobility he had shown in trying to save his husband, not only kept the secret, but also paid his personal tribute to the woman by ordering the carving that still remains on the bridge and that all visitors can observe today.