For centuries the Inquisition in Toledo greatly influenced the lives of the Toledo people. The following article shows how only fear of the unknown, the subterranean, or ” torment” led to the confession of numerous inmates. 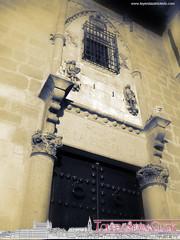 Although not exactly the terrible basements of the Inquisition described by Alan Poe, the Traveller can visit a similar thing in the Brotherhood Prison, next to the market and the Cathedral. The ” Brotherhood” was created in the time of Alfonso VIII to persecute malefactors and outlaws and all the monarchs supported and favored it… The Holy Brotherhood had its own prisons, its brackets and its own court. The current building dates from the time of the Catholic Monarchs, with a beautiful façade whose polychrome is partly preserved; the interior has undergone some transformations since it was later an inn and a neighbouring house.

Read
The mummies of San Román