Toledo evokes a city full of magic, legends, traditions and mysteries. As the city remains, it wouldn’t be too difficult today to be on the same street that centuries ago some ” sorceress” went down the way of applying some spell… We collect some of the spells to fall in love used in Toledo since ancient times.

A coplilla attributed to Padilla was heard centuries ago in Toledo:

has the Imperial Toledo,

in each one hundred charms,

and in every enchantment a wonder.

The magical arts became known by the name of ” scientia toledana” , ” ciencias toledanas” or ” artes toledanas” (others also called them ” illusion toledana” ) due to the number of them in the city of Tagus and the large number of people who practiced them. There is even evidence of the existence of a ” School of Necromancy” in Toledo, well attested by European sources since the beginning of the 13th century.

In some nocturnal routes through Toledo, during the night, you can access the magic that the city contains… Look here.

Christians, Hebrews and Muslims maintained their own practices that today would be called ” magical” and Toledo, by housing the three creeds, became a very fertile point of production of this type of arts.

In Toledo, it was remarkable the presence of ” sorceresses” that were very required by any neighbor (poor of solemnity, noble or cleric) to ” solve” some monetary problem, of health but above all loving. It is difficult (according to Blázquez Miguel) to separate the words witch and sorceress: ” these are usually women who do not have any special power, but simple knowledge that has been transmitted by someone else” . The sorceress is a bastard daughter of misery engendered by desire and whose aim is to achieve by supposedly supernatural means what is desired. In general, everything is reduced to certain prayers and certain ointments made with the most repugnant matters that had to be given to eat or drink to the beloved man and that in some occasion cost more than a displeasure to the one who tried to provide the concoction and to the one who drank it (that probably could become very sick) 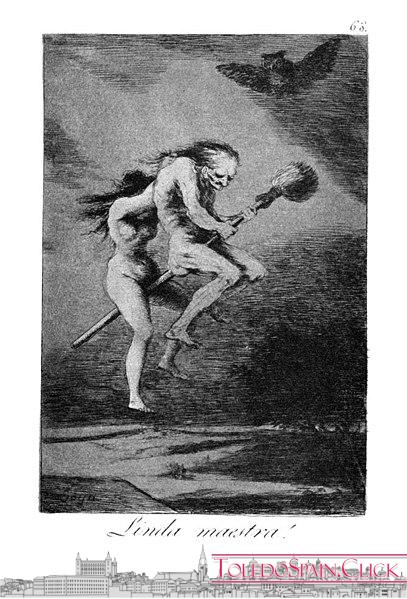 When the expected loving result could not be achieved, what was sought was that no other woman should enjoy it (since in most cases it was women who made intense use of these spells) and so, by means of ” sympathetic magic” , an attempt was made to ” flirt” with him, that is to say, to leave him impotent.

Another case is the so-called ” witches” , that is, women who have made a pact with the devil to do evil.

It was really interesting the important social integration of sorceresses, even witches, because very few cases were judged by the Inquisition, given the protection that society itself gave to these practices and the extent of them. The Inquisition only acted in very well-known cases or in practices that already went beyond the usual ” methods” that were known by practically everyone. Really, these women were one more member of the locality, as could be the apothecary or the priest…

Below we compile some of these ” spells” that are still preserved in documents (and in the memory of some people) and that were used as spells, incantations or enchantments in the city of Toledo:

Spells to fall in love

Compiles of Torresano Caves how they made concoctions to fall in love and fall in love with witches in the seventeenth century, as noted by the Court of the Inquisition of Toledo:

To fall in love with:

Margarita de Borja, a well-known witch from Toledo, detailed the following spell: Three calf’s hearts will be cooked in vinegar and women’s urine for those who wanted to attract the man and in each one put three nails, three needles and three pins… In this operation it took nine days, as it used three days to make each heart. While working with them, certain spells have to be recited and one has to go out to the corral of their house between eleven and twelve o’clock at night to conjure the stars, giving the hearts to the people for whom it had been made.

Another spell similar to the previous one, with hearts and in order to achieve the same purpose, consisted in throwing the already cooked heart into the Tagus River, ” with which they would never forget the person for whom it was made” and to make it more effective, the spell conjured up a soul, and at a crossroads it cast five dozen eighty that ” were then taken away by devils without waiting for them to fall to the ground” .

Another witch, called Antonia de Mejía, also used animal hearts to achieve the same effect. In her operation she used only one of the hearts, this time a black ram, to which she will stick some pins and put it to cook in a pot containing vinegar and salt.

Inés Rodríguez, with the purpose of falling in love, used a spell that will be the star’s prayer, which is repeated with some variants in several inquisitorial processes. These ” prayers to the stars” have been known since the beginning of the 16th century in the Inquisition in Toledo. Agnes’ version was as follows:

” In this hand I spell you star

the highest and most beautiful that in the sky is

as spell one spell two

as spell three spell four (up to nine)

all nine of you will meet

through the Jordan River you will pass

through Mount Olivete you will enter

and the knife of black cachas you will look for me

and by the teeth of Barabbas and Satan moeleréis him

three wands of black wicker will cut me

three nails are the two in the heart

and the other in the head”

This prayer was said in the window and looking at a star.

I’m sure you’re also interested in: Spells, Sorceresses and Magic Arts in Toledo

Another spell that Ines made was the following: she took a grain of salt and poured it into water saying ” just as this salt melts in the water, so let the heart of this man melt so that he may love me well” .

Antonia de Mejía will use this spell by casting the beans:

by San Pedro and San Pablo

and with the apostle James

with the Belén portal

in the holy house of Jerusalem

with the sea and sands

with the sky and stars

that if someone wants me to go out with me

This prayer was recited with two beans in the mouth, one male and one female.

Spells to fall out of love

Josefa Carranza, by means of pouting and certain powders, will achieve this effect. He will put this container for three days in the house of the person whom he wanted to hate. This person will use a ” vinagrillo” , made by a sorceress friend of hers, and with it they will sprinkle the house of the indicated person.

Ana de Miranda, who was in love with a cleric, cast a spell in the company of Ana de la Cruz, so that he would abandon his lover. The spell was: ” he urinated in a pot, when he threw it he said some words that they didn’t understand and they put salt in the urine and gave it to a person to spill in the lover’s hallway so that, stepping on it, he would hate it” .

The repulsive substances, as we observed, were intended to cause the same repulsive effect on the will of the people who were desired to fall out of love.

Margarita de Borja, in order to know if one person loved another, put a rosary in the form of a cross in her hand and passed it to the other hand saying a few words; if the rosary moved it was a good sign. The inquisitorial accusation noted in one of the trials: ” and after he had said the words, the rosary began to move very quickly.

María Castellanos, to know if they corresponded in love, shuffled the cards and said:

with Adam and Eve

with the clergyman who celebrates mass,

with the north and sailors guide,

and tell me the truth

if you want me well

that we go out together.”

By the way, all this and more is told to you in the night routes of “Toledo Spain” . Don’t miss it.