It is no coincidence that Toledo has been chosen by sorcerers, witches and necromancers as an important city in learning its dark arts for centuries. The presence of the evil one has been ineffably recorded under numerous registers, even in legends such as ” The Devil’s Mansion” . Learn about the relationship between the Devil and Toledo.

Tradition of centuries is the one that embraces the city of Toledo with the nigrománticas arts and the Maligno. It was on occasion when there were more religious than inhabitants in the city; from that time many buildings remain, some, many (perhaps too many, due to their lamentable deterioration) still in use and in continuous decline, due to the impossibility of maintaining so much property. It is therefore no less shocking in such a religious city the intense presence of Romantic arts and practices, as well as the cult of the Devil.

The Devil’s Alley in Toledo

Numerous are the vestiges of the influence of Satan in the city, even in some name of its narrow streets, such as the ” crossing of the Devil” , in the heart of the city, or the ” alley of Hell” of which we have already spoken on this Web earlier.

Several toponyms also refer to the evil presence, such as the ” tower of devils” , now non-existent, located by some researchers in the Cerro del Bú. Opinions on the names of these places are very diverse. Sometimes the Legend is used, and other times History offers us its version.

In the case of the crossing called ” of the Devil” , it is very possible that, according to Luis Rodríguez Bausá in his work ” Unusual Toledo” this name was due to the custom of insulting those neighbors accused by the Holy Office. The accused not only perished in public shame when they were burned in the Toledo brazier, but also their family must suffer outrage because their clothes (the ” sanbenito” in the jargon of the time) were exposed for a long time in the Parish of the deceased. If the origin of the defendant was unknown, these clothes were hung in the window of the house where he had lived, being possible that the denomination of this street was due to this fact, since these ” sanbenitos” sometimes had drawn devils or flames.

Insurance that you are also interested: Easter Toledo 2017. Processions, timetables, what to see and do

Other places also refer to the evil one, such as the ” meson del Diablo ” , which appears in the Ensenada cadastre of 1751 and numerous are the legends that relate Satan to the Toledans of past centuries. In enchanted houses and deep basements or caves, with goblins, witches and sorcerers, magicians and necromancers, and with hard interventions well glossed in preserved documents of the Holy Inquisition, which not infrequently ended in the so-called ” purifying fire”” .

The influence of these narratives and facts was also noted in Toledo’s constructions, including churches and the Cathedral, where numerous forms make up a rich iconographic bestiary of stone which we have spoken about on another occasion in these pages. Capitals, gargoyles, columns, friezes… In almost any corner of the buildings present in Toledo we can find the presence of demonic figures, placed there, to surely warn the visitors and frighten them, since very few knew how to read, but they did know the classic figure that represents the evil one, coming from the Romanesque iconographic tradition that very profusely represented the Devil as a deformed and threatening being.

The presence of three cultures in Toledo also influenced the city’s intense demonic presence. The Arabs call it Aroth or Maroth, the Hebrews Husa or Azael, the Christians Beelzebub, Satan, Lucifer, Abbathon, Asmodeus, Tryphon, Sabbataal… And it was frequent for Christians to attribute the presence of the evil one to the Jewish inhabitants of Toledo, given the ignorance they had of the collected Hebrew religious practices (and not infrequently nourished by the fanaticism of the Catholic religious)

.
I’m sure you’re also interested in: Pilgrimage of the Virgin of the Valley in Toledo (updated 2019)

As we can see, the presence of evil in the city is intense. We invite the visitor to dedicate some time of his walks to discover where the evil is hidden… Surely he will find it where he least expects it.

To complete this article, nothing better than a Toledan legend, ” The Devil’s Mansion” , in which we are told how in the Barrio de San Miguel, near the Alcázar, and on a night of souls, under the lament of Toledo’s midnight bell towers, in a black house located in this neighborhood, with no little tradition of ” occultist” , and in front of the parish of San Miguel, not far from the house of the Temple, ” that house at night was the neighborhood terror” , since in it all vices had occasion: orgies, covenants, blasphemies, fights, gambling and theft, usury and swindling… ” The Kingdom of Satan in Toledo’s night” . The house was run by a Jew and ” a banner” , he was gnawed, she was old and the Devil lived with them two…

On this night of the dead, almost dawn ends the macabre meeting in the house, and as they all go out, suddenly the house burns with flames, and soon it is reduced to rubble, burning the old woman and the Jew, being buried with the evil that lived in the house.

* Extracts from the legend narrated in poetry by Jaime Tolomina Torner. Click here for another version.

Do you like this kind of narration and do you want to listen to it in Toledo, where it could have happened? Click here: Toledo Magical Route, the original one. 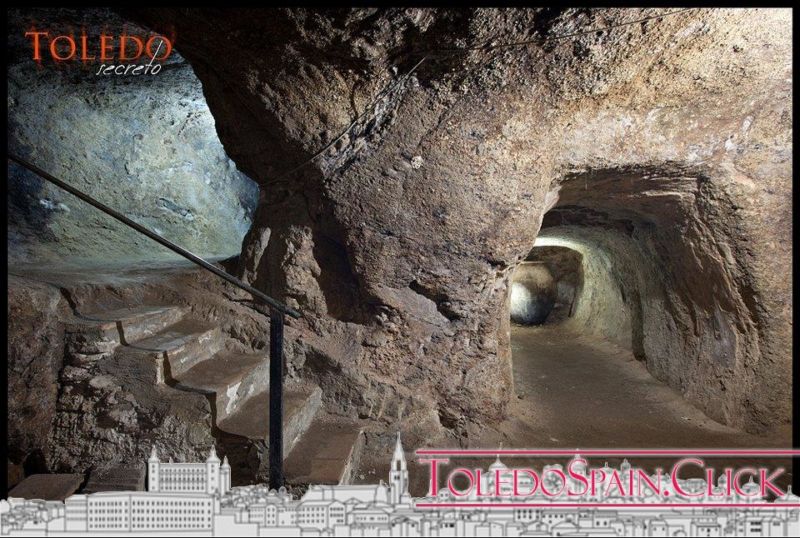 Cave of the Casa del Duende in Toledo