Skip to Content
Home Mysteries of Toledo What do the subways of Toledo Cathedral hide? 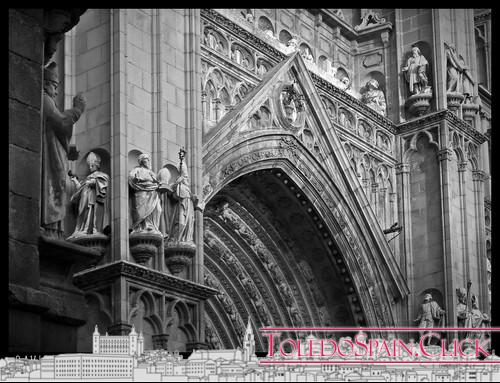 A few days ago we received a quite curious testimony about the subways of Toledo Cathedral, which we cannot resist publishing.

” It happened just 30 years ago, when I was doing military service at the Toledo Infantry Academy. I lived in Valencia at the time (1984).

I visited the Cathedral a lot because I love the Gothic style. I realized that, just below the altar where the priest officiates the Mass, there is a subsoil, shallow but the height of a person with more than enough, with iron bars at the entrance.

People passed by and didn’t pay attention, because through the fences that closed the entrance to that sub-floor, you could see folding wooden chairs, those cheap village fair chairs, chaotically piled up, not even stacked on top of each other in order, but… removing all the visibility of what might be inside.

That pissed me off because it contrasted so much with a site of such opulence, in the public eye, in such a special place…

All in all, I walked there every day, hoping to see something, and one day, I saw that the bars were open, and a group of 3 or 4 boys my age at the entrance.

I started talking to them and they told me that they were visiting seminarians in Toledo, and that the priest was teaching them the Cathedral. They were waiting for him to give birth… from the other side of the Cathedral! That already made me more alert, because, it is good that they put the light switch something hidden, out of reach of the people but… in the opposite part of the Cathedral?

I was lucky enough to dress as a soldier (at that time we were forced to, if we wanted to visit Toledo, as ” bonito” , as we said, not the faena uniform), and as I know how well the army and the church get along, I began to chat with them, ” What luck you have to visit places where poor mortals like me can’t, you are privileged” etc etc.

When the priest came, these seminarians, who apparently liked me or felt sorry for me, spoke to him and I managed to get in with them.

I was trying to disguise my interest, but my heart was running out of emotion. As I entered I saw, on the left hand side, enormous medieval inscriptions, still painted with the red and black of their letters and everything, and a drawing of a knight riding a horse. Only because of these medieval inscriptions and engravings, worn out by time but well preserved, should it be an obligatory place to visit for the public.

But when I turned…, I froze. There was a stone altar with a very ancient appearance, and above it, a sarcophagus of immaculately clean crystal, and inside a perfectly preserved skeleton, hands crossed over the chest, and on the head a very light-haired mane. I know it sounds very strange that a skeleton retains that mane, but that’s what I saw, and it was just in front, no more than a meter away.

At that moment a priest passed by, from down there only the torso could be seen, but he was dressed to officiate at Mass, with the chalice in his hand and that elongated cloth that covers him. He stood still and drew back, crouching to see us. The other priest explained the visit to him and the seminarians asked him to whom the skeleton belonged. He said to St. Orsola. They asked him if he was really St. Ursula, the one of the eleven thousand virgins, and he nodded.

It was another shocking fact for me… I know that there are many saints but this one, on which the order of the Ursulines has even been founded… (I think they have a presence in Toledo). I don’t know, I think it would even be a place of pilgrimage and everything! Either that, or it wasn’t really Saint Ursula, and it was a lie to cover up who that skeleton was.

I couldn’t find a single reference, anywhere, that the Cathedral had even a bone of this Santa.

What I do believe is that the skeleton, by its structure and size, was a woman’s. I was in a state of shock, because this far exceeded what I expected to find in there. I didn’t even expect it from afar.

Then we went to the chapel of Constable Alvaro de Luna. The floor looks like stone from the outside, but when you go down a staircase behind the sepulchres, you go down to a catacomb and you can see that the ceiling is made of glass and lets the light through perfectly. There are tombs on the walls, and in an oversight of the priest, I looked at a wooden trunk at the end of the whole, I opened it but it was empty. There was nothing unusual there, only tombs embedded in the wall.

I commented this event with the Pater of the Infantry Academy. His face was changed, and he left me with the word in my mouth! As he went down the stairs (because he was really running away from me!) I was finishing explaining what I saw, but he kept going down them quickly so he wouldn’t listen to me anymore.

And that he was always very receptive and dedicated his time to us, always smiling, he was very kind. We called him ” the Chinese” because when he smiled his eyes were slanted Asian type. Even one day, before this event, I found him in the cathedral, and commenting with him about the origins of the construction, he told me that the dimensions of the cathedral were exactly those of Noah’s Ark, which could be contrasted with the Bible. That’s why his reaction was so rare for me.

About 13 years later I returned to Toledo and saw no sign of the chairs. The subsoil was now diaphanous, you could see through it, without perceiving anything special inside. But what is clear is that this very old altar, and the valuable Gothic inscriptions on the opposite wall, must follow as they are. It is a pity that the public is denied a visit, because it is one more treasure of Toledo.

All that remains for me to tell you is that all this is absolutely real, that I have not exaggerated an apex, nor am I an exalted one or someone who invents things. I say it because it’s pretty surreal what happened to me, but I swear and give my word that it’s all true.”

And with these lines we end the description that a kind reader of this Web has sent us.