Skip to Content
Home Toletvm The Chasuble of San Ildefonso

The imposition of the chasuble on San Ildefonso in Toledo, makes this tradition toledana one of the most revered in our city, being represented in numerous works of art and being celebrated as Patron of Toledo on January 23.

Ildefonso de Toledo (Toledo, 607 – 667, son of Visigoth parents and nephew of Saint Eugene III) was bishop of Toledo from 657 to 667. He studied in Seville, under the tutelage of San Isidoro, and entered monastic life in the order of San Benito, fleeing from his parents, nobles who opposed his priestly life. Later he would be elected abbot of Agalia, in the river Tagus, near Toledo.

In 657 he was elected archbishop of that city. He unified the liturgy in Spain and wrote numerous liturgical and dogmatic works, particularly on the Virgin Mary. 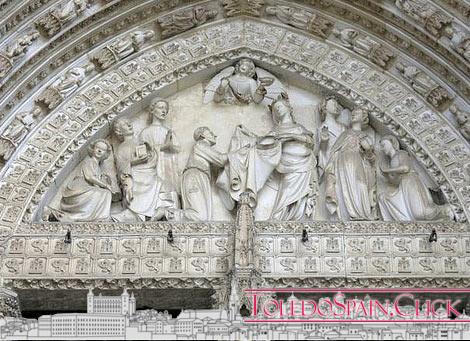 Sculptural group on the cover of Toledo Cathedral, with the imposition of the Chasuble on San Ildefonso.

One night in December, he and some clergymen were on their way to the main church of Toledo, located on the site now occupied by the Cathedral. Upon entering the dark nave, after opening the heavy gate, they discovered that an intense light emanated from the altar, over the Bishop’s chair.

At this moment, all his companions fled in terror, observing that the light was shining and moving with great intensity. Ildefonso, not feeling afraid, approached the altar and could observe that the light came from the Virgin Mary, accompanied by a large group of angels who sang heavenly songs.

The Virgin signaled Ildefonso to come closer and he, kneeling before such a presence, heard him say:

” You are my chaplain and faithful notary. Receive this chasuble which my Son sends you from his treasury.”

And after having pronounced these words, it was the Virgin herself who imposed the chasuble on Ildefonso, instructing him to use this garment only in the festivities dedicated to Her.

In Toledo Cathedral, you can still see, protected by a sturdy grille, the stone on which the Virgin put her feet when she appeared to San Ildefonso.

know your friends good award to give,

appeared to him one day with very great mayiestat,

with a book in the hand of very great claridat,

Fízoli another grace, which was never heard,

It seems that this was not the only celestial favor and miraculous fact enjoyed by the Saint; his mystical and contemplative devotion was compensated with the strangest supernatural charisms; and many other prodigies tell the chronicles of his contemporaries; so it is not surprising that, from Gonzalo de Berceo to Lope de Vega, the Spanish lyrics have sung the devotion of San Ildefonso to the Virgin Mary. 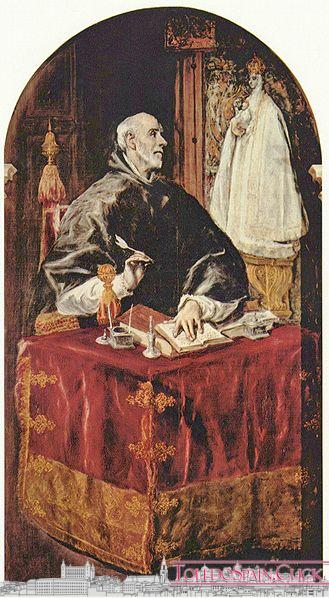 San Ildefonso, in a work by El Greco (Source: Wikipedia)

A few years earlier, seeing the danger looming over Seville due to the invasions that the Arabs were carrying out in North Africa, San Isidoro decided to move an important series of relics preserved in this Cathedral. Among them was the famous ” Ark of the Relics” , brought from Jerusalem and preserved since the time of the Apostles, which arrived in Toledo, but for a short time, due to the peninsular invasion.

This ” ark” and other relics preserved in the Main Church of Toledo suffer a new long journey when they were moved north (Asturias), ” first hidden in a cave in the Monsacro and then by order of Alfonso II ” the Chaste” were moved to the Chapel of the palace dedicated to San Miguel.

Among these relics was already the Chasuble of San Ildefonso and his body, which remained in Zamora. Certain relic relationships testify to the existence of the Chasuble, and the Archdeacon of Tineo, Marañón de Espinosa, First Rector of the University and chronicler of the cathedral, says in the early seventeenth century in relation to the chasuble: ” We only know that it remained inside the ark, when its official recognition was verified in the times of Alfonso VI, the precious garment that Our Lady brought from heaven to her chaplain San Ildefonso, that we do not know if it was dawn or chasuble because the cédula did not say anything but dress without declaring more” .

Photo Falafel in Haifa – Access to the city of the remains of San Ildefonso, during the days they stayed in Toledo in 2007.

In more modern times, around the 16th century, there is evidence of various written requests from the Toledo archbishopric requesting the Chasuble from Oviedo. The description of the Chasuble at the end of the 16th century by Father Sebastián Sarmiento of the Society of Jesus to Father Francisco Portocarrero of the same Company, preserved in the archives of the Cathedral of Toledo, is curious:

Hang me that V.R. sends me, even if it is from time to time things of his service, and more in honor of the Most Holy Virgin, of whose chasuble I will say what I remember.

It is true that I was in Oviedo at the time that the large Ark in the middle of the Holy Chamber was opened. The occasion to open was the Consecration of Bishop Don Pedro Junco de Posada, born in Llanes, son of Juan de Posada and María Alfonso Díez de Noriega, who wanted to consecrate himself together with his Bishop Don Pedro de Quiñones. (I think the correct name was Diego and not Pedro)

At the Consecration came Don Juan Alonso de Moscoso, Bishop of León and the Bishop of Galípoli D.N. Quinteros who was then Abbot of Santander.

Having them together one day, Don Pedro de Quiñones told the said Prelates that there were four of them, something that would not happen again until the day of Judgment, that they would try with all possible reverence, to open themselves and the one who had the keys to the Holy Chamber, that Ark to know the magnificent treasure. At last he convinced them that if and, prevented with fasts and prayers, after the Consecrated one of Salamanca, with all the possible secret, the bishops and Canons who had the keys joined together and after having opened the first ark that is great, they found another minor one and another and other minor ones until they found with a very small chest, as of a very long span which had a sign that said: THE CHESTHOUSE THAT OUR LORD GIVES TO SAN ILDEFONSO. They were very frightened, because it seemed almost impossible for a chasuble to fit there. They opened the chest with great difficulty, so much so that they were almost hopeless of being able to open it and inside they found a sky-colored cendal in the shape of a Portuguese hood, so big that it could cover the tallest man in Spain, without texture or seam like an onion cloth, so delicate and subtle that with only the breath they breathed, it swelled like a candle when the wind gave it strength. And turning it back to fold as it was, they picked it up in its little box, all swearing that they had nothing to say to anyone, if it was not twenty leagues out of Oviedo, and so they fulfilled it.

The Abbot of Santander in having left the twenty leagues turned to two Canons of Santander that accompanied him and with terror he said to them: ” Is it possible that I have been able to keep the secret in the chest, what I have seen in Oviedo” ? And he told them; he also referred to those of my College of Santander in the long run. And the Bishop of Salamanca, Don Pedro Junco de Posada, later told the same thing to Father Ferrer. This is what your reverence asks me. (Source)

After the intensity of Toledo’s request to recover the relic, it is believed that the Chasuble was hidden in Oviedo, and again history and legend intermingle: It was said to be in the large ball of the cathedral tower, but it was proved that it was not; it was then said to be under the Holy Ark, but neither; it was then thought to be behind the altarpiece of the chapel of San Ildefonso (chapel that disappeared in 1934), but it was not there either and no matter how much it was searched it never appeared…