Skip to Content
Home Toletvm The Enchanted Palace of Toledo (I)

Great treasures Toledo hides in his bowels. According to tradition, protected by fierce animals and large statues, and he who dares to face them will end his days there, as we can read in this well-known legend, related to the mythical ” Cave of Hercules” .

Magdalena and Pablo were two young people in love with Toledo, and like so many others they constantly thought of staying together, getting married and forming a family. At that time, when scarcity was rife throughout Castile, a daughter’s wedding was seen as a ” good business” , so the father did not authorize her marriage because he thought Pablo had little to offer as a dowry.

Magdalena’s father had already planned the marriage of his beautiful daughter to a wealthy, old man, a wealthy merchant from the city who had recently been widowed.

However, after his daughter’s pleas, he decided to give Paul a chance, proposing, and believing that he would never succeed, that if in a few days he could equal or surpass the merchant’s fortune, Magdalene would be his.

Two days passed and the lovers cried bitterly, because they found no solution to their problem. Pablo walked through the narrow and dark streets of Toledo on a night of fog, in the middle of winter, after talking and crying for a while with his intended, without finding a solution, when arriving at the church of San Ginés he thought he knew what to do … He ran to the house of his beloved and said goodbye telling her that if she did not return he would know that only she had wanted and there was no other woman on earth for him.

After a while Paul pushed the robust door of the church of San Ginés, under whose surface was the nefarious ” cave of Hercules” , as he had heard his grandfather narrate multiple times, and that according to the legends, he hid gold and immense riches that would enable him to marry his beloved.

He passed through the dark naves of the church, illuminated only by candles and with an intense smell of incense, and after pushing a small door behind a pillar ajado for time and could have belonged to an old Roman basilica, penetrated into the dark cave carrying one of the candles taken from the church. After a long stretch of steps that went down to the most infinite blackness, and after avoiding some landslides and large semicircular arches of granite ashlars, he entered what seemed to be an endless, black, narrow passageway, and after several hours of endless walking, more and more hunched over, his strength began to waver due to the absence of oxygen and a terrible foul smell that seemed to come from the end of the tunnel, which he still could not see. After a short time, the only thing he could feel was how his body hit the hard ground on which he was walking…

This was followed by a deadly silence and then a cry of agony. 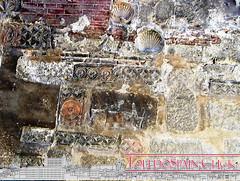 Photo of Visigothic reliefs on the façade of the now defunct Church of San Ginés by Eduardoasb on Flickr.com

At twelve o’clock in the evening of that same day, in front of Magdalene’s house stood the figure of a young man who, knocking intensely at the door, asked for the owner and pretexting an important and urgent matter ordered him to accompany him.

The girl’s father, surprised by such impertinence, rebuked the man, demanding that he identify himself, as he covered his face with a cape.

– You don’t care who I am. Just follow me! the stranger ordered.

More out of curiosity and moved as if by a magical spring, without the strength to oppose such a mandate, the father of the young woman accompanied the man through the dark streets of Toledo.

When they came to San Gines, the old man murmured: The Cave of Hercules! What do you want from me? 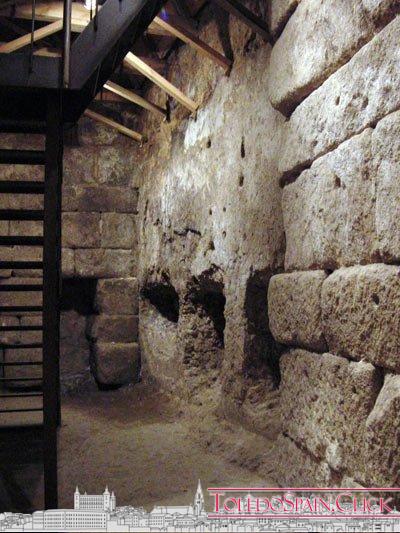 Cave of Hercules in Toledo, by toledospain.click, before its current restoration.

Then the man answered: I am Paul, whom your intransigence and covetousness has lost, for seeking the treasure which they said enclosed this cave, which I needed to marry your daughter, according to your demands, I have found death.

I have come back to seek you so that you may enter here and live without dying, suffering worse punishment than in hell.

The old man, seeing frightened how the figure of the young man was confused with the fog that was in the door of the church, begged for mercy, to which Paul replied:

Your passion was gold, come in, here’s enough. And giving him a strong push, the man went through the door of the church and found himself in the cave, from which he never came out again.

Many commented in Toledo the following days on the disappearance of young Paul and Magdalena’s father, but no one was able to give any explanation and their bodies were not found. Time erases everything and they all forgot the two men, until one day, a young man running away from the whips of his master entered the church of San Ginés and found the door that gave access to the Cave of Hercules.

Thinking only of his master’s fear of the whip, the boy advanced through a narrow, dark passage and when he realized he could not return. He continued and found another gallery that followed, and after a long walk, passing through large rooms, he found an exit leading to the field, near the Higares Estate, in the municipality of Mocejón.

He returned to Toledo and told what had happened and how on his walk through the cave he found a great treasure watched over by an unknown and terrible animal. He also saw human remains near the animal of those who had dared to challenge him for the treasure, but he did not want to go near it and continued to flee. In another room he saw a gigantic bronze statue striking an anvil with terrible blows on a gold bar, and he could see that it was in a large vault in which he could identify some large pillars that were lost in the ceiling. There he could also see how two men, insignificant beside the statue, who by description were Paul and Magdalene’s father, were going round and round without diverting their gaze from the gold stored there.

Legend has it that after telling these terrible stories, the boy fainted and died soon after.