No one knows how Count D. Julian’s daughter died. In that upheaval of an empire that sank in the Guadalete with horrible din, in that disappearance of an entire race, all the characters that, more than others, were in the way of the torrent that overflowed, were buried in its waters…

No one knows how Count D. Julian’s daughter died. In that upheaval of an empire that sank in the Guadalete with horrible din, in that disappearance of an entire race, all the characters that, more than others, were in the way of the torrent that overflowed, were buried in its waters. The story itself, frightened of such a tremendous judgment of God, broke its boards and veiled its face; and for some time the shadows spread everywhere… When the first moment of stupor had passed, when it picked up from the ground its style, with which it engraved in the stone the exploits of men, its first page was a very sad and prolonged lament: the cry of Spain that points to the chronicle attributed to King Alfonso X. But he did not want to look back, and the end of that bloody drama, whose prologue had been the banks of the Tagus, and whose epilogue was the plains of Jerez, was enveloped in the deepest mystery. Nothing is known of Don Rodrigo and D. Julián; they all ignore the end of Florinda, D. Oppas and the sons of Wittiza.

This doesn’t satisfy tradition. Ask her, and she will answer you that D. Rodrigo died doing penance, transformed into a hermit, after suffering a terrible atonement for his crime; that D. Julián, D. Oppas and the sons of Wittiza were killed by the same Arabs, who mistrusted them, and whom they had so well served with their hatred; that Florinda, in short, crazy with pain and shame, came to finish her days in this same tower, mute witness of her crime. This is how the legend refers to this last event. 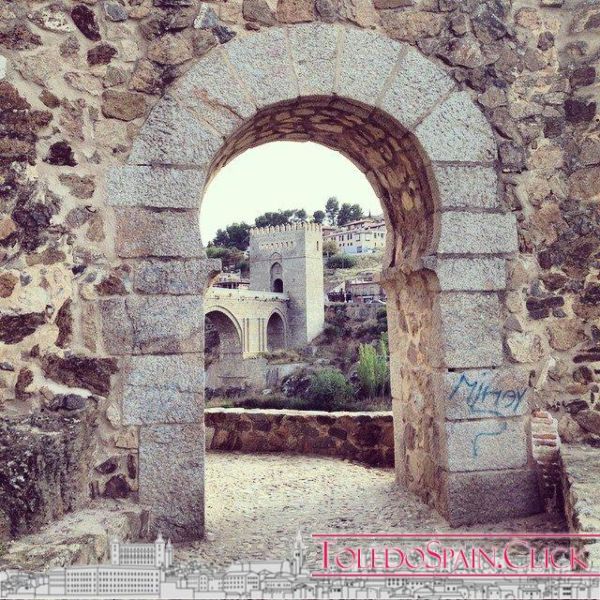 Bridge of San Martín, in Toledo

Victorious the Arabs in the Guadalete, where the strongest and most vigorous part of the Gothic people came to stop them, and emboldened with their triumph; almost totally demolished the walls of the cities, and lacking arms for Wittiza’s disposition, who changed all the tools of war in farming instruments, easy went to the victors, led by Tarik, to seize the rest of Spain. They did not take long to reach the view of Toledo, who was preparing to resist them, when the Jews who lived in the suburb, and who had to avenge so many insults, so many offenses from the descen teeth of Sisebuto, opened the doors of the city. From that day on, and for 374 years, Toledo lay in servitude, and the Mohammedan crescent floated on its fortress and walls.

Shortly after this, the inhabitants of the part of Toledo next to the old palace of the Goths where today the Puerta del Cambrón and San Juan de los Reyes stand, were frightened, and every night, while the wind roared with fury, they commented with terror on the appearance of a crazy and disheartened woman, who, And without ever stopping, without ever raising his eyes to heaven, he eternally continued his career murmuring incoherent and meaningless words that brought fear and sadness to the hearts of all who heard it. In vain there were some who were quite bold enough to wait for her on their way and ask for an explanation of their actions; as soon as they saw that someone was trying to get close to her, their eyes were ready to come out of their orbits, their agitation was more extraordinary, their sentences more incoherent, their cries more savage: she fled, she fled, without anyone being able to follow her in her unbridled career.

I’m sure you’re also interested: The mystery of a tomb

Was it a human being? Was it a specter? Did it have a real body, or was it imaginary the way mortals were presented? Questions are these whose answer would have given the Toledans much to do, that they could assure nothing in a matter they cared so much about knowing. But her curiosity crashed before a powerful obstacle: that woman did not want to see anyone, and she did not seem to live well except in solitude.

Much time passed like this; much time was the object of conversations held quietly and to the ear, and of the most adventurous hypotheses. One day she disappeared and no one saw her again.

But since then, a very strange thing has happened: every night, as soon as the sun sun sunk its diamond disc in the horizon and the clouds covered the sky, in those moments of calm that precede the storm, you could see, standing on the tower that today is preserved from the luxurious baths of the Cava, a stark and dry figure, with loose hair in the air, turning everywhere the sad look of his eyes, without expression and without life; Suddenly, he raised his eyes towards the palladium of Don Rodrigo; the wind, which roared, modulated a prolonged scream, and, when exhaling, another shadow, the shadow of a man armed with all weapons, but with a bare head, also arose over the ruined citadel. And the two ghosts looked at each other, nailed their pupils to each other without light, and it was then that the hurricane roared most strongly, when the river overflowed its current through the neighboring fields and flooded the fertile plain, when the moonlight disappeared completely, and the thickest darkness reigned over the frightened people. In those hours, long as pain, no one dared to go out into the street, for fear of finding themselves in the shadows of the night with that brilliant look that seemed to unleash the elements to throw them upon the world. 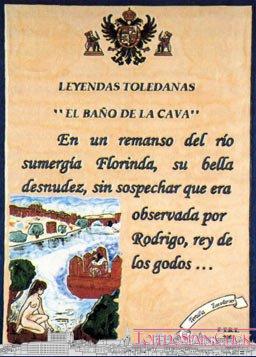 Some of the faithful went to an old hermit who, withdrawn to the center of the mountains, spent his life in abstinence and fasting, to seek remedy for so many evils; they told him of the strange events that so powerfully called his attention, and asked him to impetrate from heaven the grace that those shadows should sleep peacefully again in their sepulchre. The old man put himself in prayer, when at night his pupils fell asleep, a figure appeared to him, similar to the one painted by the Toledans, and this figure opened his lips to speak and said to him:

-I am Florinda the damned, Florinda the Cava, the impure daughter of Count D. Julian. When I knew that Spain was, by my crime, slave of the sons of Mohammed, an inner voice rose in the deepest part of my soul, ordering me to come, without truce or rest, to this place of my faults, to seek my honor lost in the revolt waves of the Tagus. I lost my reason, but not enough to stop hearing this accusing voice, and crossing valleys and plains, prairies and mountains, I arrived in Toledo, and in Toledo I have lived a long time, sustained by a mysterious force, incessantly searching for what I was not given to find. Finally, my shame and my pain killed me; there, in that place, witness of my clumsy pleasures, my body lies insepulto; my soul goes every night, in penance, by order of God, to weep eternally my fault; and evoked by my weeping, the soul of Rodrigo goes down also to weep his at the broken battlements of his palace. Go there, bless those cursed places in the name of the Almighty, and my soul will never appear in them again.

And the shadow disappeared, losing itself in space.

The hermit awoke startled, and that night, followed by the inhabitants of the suburb, who carried lit teas, he moved to the ancient baths of Florinda; as soon as the cross entered them, the body of the unfortunate woman, and in a complete state of putrefaction, he rose by himself, and went to submerge himself in the river with the admiration of all. The hermit blessed the brief enclosure in the name of God, and kneeling down he prayed for the two lost souls, and everyone prayed with him. A picture of love and tenderness! To see those beings, once free and happy, now slaves and outlaws in their own homes, praying for the eternal rest of those who had caused their misfortunes!

But there was romance:

discovered has his care

to the Cava it is said

who he’s in love with.

He looked at his pretty body

look at his face alindado

Rodrigo who only listens

the voices of your wishes

La Caba wrote to her father

letters of shame and mourning

and sealing them with tears

to Ceuta sending them presto.

Situation of the Legend in GoogleMaps:

Place the Legend in Googlemaps by clicking here.