Towards the fourth century, and under the Roman domination of Toledo, we find a legend that, like so many others in the city, mixes love, religion, persecution and death. Toledo hides a violent history even in the quietest places of today.

Towards the fourth century AD, the city of Toledo, like many other regions of the already old territories of continental Europe was dominated by Rome. In these areas of Roman domination were imposed laws, customs and religion that the invader and winner of numerous battles brought with him, sometimes replacing the one in the area or borrowing some of their customs that skillfully incorporated the cult of pagan gods.

At that time, Daciano was appointed governor of the territories of the peninsula and one afternoon he arrived in Toledo, well escorted by his Roman guard. As was customary, at night there was a reception in the Praetorium given the importance of the character who arrived in the city, and patricians and important personalities met to entertain the emperor’s representative in Hispania.

It was the time when Christians were seen as a threat to Roman power, so persecution, imprisonment, and murder were common. Dacian issued a praetor’s edict, ordering the churches to be destroyed, the sacred books requisitioned and burned, and to strip the Christians of their dignity and goods, condemning them to torture. All those who did not recognize the official gods of Rome would be returned to slavery.

In not too long, the city jail, located in what is now known as the Paseo del Tránsito, was filled with prisoners… The Tarpeya Rock, a place of torture, rose threateningly above it. This rock advanced over the dark dungeons of the prison, jutting out in height and risky form over the waters of the Tagus, from which it was separated by a wide and stony precipice.

Since ancient times, a legend of the city of Rome tells us how the Romans barricaded themselves in the fortress of the capitol to defend themselves from the attack of the Sabines, a people who lived between the Tiber and the Apennines. Tarpeii, the daughter of the guardian of the fortress, falling in love with the Sabine king, Titus Tatius, decided to open the doors of the fortress in order to join him. The Sabinos, people of honour, did not admit treason in any case, and so as soon as they stepped on the Capitol fortress, they killed the traitor Tarpeya by crushing her with the weight of their shields. In other versions of the same legend, it is said that Tarpeii was killed by the same Romans when they saw themselves betrayed by throwing it from the top of the Capitol fortress; the rock from which the traitors were thrown. At present, this rock is still known as the Tarpeya Rock, and in Toledo, we also have one. 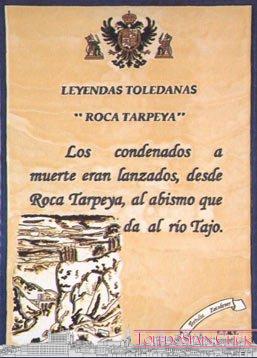 Ceramic plaque of the legend of Roca Tarpeya

According to Toledo legend, a young woman named Octavila, daughter of the oldest jailer, in love with a young Christian named Cleonius, embraced the Christian religion at the expense of her beloved. It is said that by December 9, 306 many Christians were waiting for their final hour in the dungeons of Toledo’s prison, including Clement who had been captured and sentenced to death being thrown from Tarpeya Rock. At dawn, they lead Clement through the courtyard of the prison to meet his fatal fate, when Octavila, knowing this waits there for his beloved. The legend tells that Cleonius gives at that moment a small cross that he carried hidden in his mouth.

The young Christian, like so many others, was led to the top of the rock and pushed into the void by two Roman guards who saw how he died hopelessly as he fell over the precipice.

From here on, several versions of the legend give continuity to the story. Some tell us that Octavia dies for the loss of her beloved and her father, Roman jailer discovers among his clothes the cross given by Clement so understanding the injustice committed and the loss of his daughter is also converted to Christianity and in turn is executed in Roca Tarpeya …

In other versions, no reference is made to the misfortune of Octavia and her father, but to Saint Leocadia of Toledo, who on the same day of Clement’s death would die in another cell in Toledo’s prison, which with her fingers left the sign of the cross engraved on the hard walls of the prison rock. 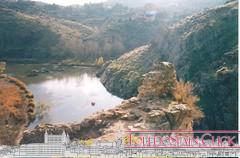 At present, we can find in this area of Toledo a garden, in which some locate the real House of El Greco, not far from the Sephardic Museum, and more precisely, on the Rock Tarpeya, the sculptor Victorio Macho builds in 1953 his house and workshop from which on the Tagus, a beautiful panoramic view of a part of the cigarettes of Toledo can be seen. On his death he bequeathed this house and all his work to the city of Toledo, and there is created the museum that bears his name, also known as Roca Tarpeya, inaugurated in 1967.

– Place this legend in GoogleMaps.