It was the time when Napoleon’s French army had taken Toledo (1808-1812) and so many soldiers camped in the square that they had to take all kinds of buildings, regardless of their class, use or destination. When the fortress was full, all the convents and churches of the city began to ” inhabit” . 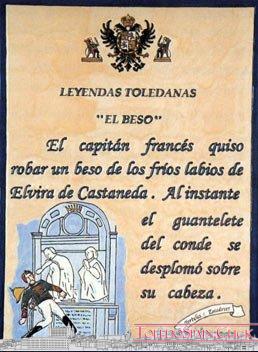 It was the time when Napoleon’s French army had taken Toledo (1808-1812) and so many soldiers camped in the square that they had to take all kinds of buildings, regardless of their class, use or destination. When the fortress was full, all the convents and churches of the city began to ” inhabit” .

It was a late night when a hundred dragons arrived in Toledo on horseback, breaking the silence of the city with the collision of the hoofs of their steeds on the cobblestone and the metallic sound of their weapons, they reached the square of Zocodover. The commanding officer was young. When he arrived at the square he was attended by another who, after squaring up and greeting him militarily, prepared to accommodate the troop in the place they had assigned him.

When the captain knew the place where they were going to be accommodated, he made some objections, but his compatriot, who was sergeant aposentador, made him the charges that in the fortress there were no more people and that in the cells of the friars of San Juan de los Reyes they slept fifteen hussars in each one. He tried to convince him that the convent he had been assigned to was good and the part of the church was practically free to put the horses in.

Troop and captain followed the bettor through the narrow and dark streets of the city, guided by a small lantern that he carried. After a short walk, they reached the church, which was completely dismantled. In a few moments and due to the tiredness brought by the troop, they settled down, leaving the horses tied inside the local M.

In the light of the lantern could be seen the state of the church, with its niches empty of images. Some altarpieces could be seen on the walls. There were also slabs with inscriptions, citing the names of those buried there; but what really stood out in this whole set of ruined and dismantled building were the white marble statues, like ghost albums, which, some lying and others prostrate on their knees, were found on the mausoleums of the dead and in this place buried.

The day had been long, they had travelled fourteen leagues on horseback and the tiredness was more than the precariousness M accommodation, so that soon the protests of the soldier were stopped, which as it could accommodate and, little by little, the silence was seizing the improvised barracks.

The next day, our captain was awaited by some classmates who, knowing his arrival, had sent him a warning that they were waiting to greet him in Zocodover Square. The meeting was very pleasant, as it had been a long time since they had seen each other. After strong embraces and affectionate greetings everything was spoken of; but the most pressing and important thing for those who had been in Toledo for some time was the news that the newcomer brought from his homeland. So the conversation continued until one of them, in a joking tone, asked our captain how he had slept in his ” lodging” , to which he replied that he had not been able to sleep too much, but that insomnia with a beautiful woman had been more bearable.

I’m sure you’re also interested: The mummies of San Román

Their interlocutors did not believe what they had just heard. They asked for more information about what had happened and the narrator told them that he was suddenly awakened by the noisy ringing of the cathedral’s fat bell and that, at that moment, M campanero and his whole family had remembered. After the fright, he tried to recover his lost sleep and it was then when, before his eyes, he found the figure of a woman kneeling, her figure illuminated by the scarce moonlight that penetrated the temple.

His friends looked at him with disbelief and amazement, but he continued with his story, telling them that they could not imagine that he had appeared before their eyes: she was a young woman of incomparable beauty, with features full of sweetness. Her gesture was restful and noble, and her white suit was in perfect harmony with the paleness of her face. For a moment, he commented, he thought it was a hallucination, the product of fatigue M camino, but no, she was there, and stood motionless before him, as if he were not a human creature.

One of his comrades, who took the story as a joke, pretended to be keenly interested and asked if he had spoken to him. The captain replied that he had not determined to speak to her because he was sure that she would neither see him nor hear him if she had spoken to him. The same friend asked her whether she was dumb, blind or deaf. To this he replied that it was all at once, for he was referring to a marble statue.

When they heard the end of the adventure, they all laughed out loud and one of them said that he had enough of them in his room of San Juan de los Reyes. But the newcomer replied that they would never be like his, that it was a Castilian lady who, by virtue of the sculptor’s skill, seemed to have life.

Following the joke, one of the contertulios asked that the beauty in question be presented to them, making the mocking exception of, if there was no jealousy involved.

The captain then told them that next to the lady was the statue, also in marble, of a warrior who seemed to be as alive as she was and who no doubt thought she should be her husband. He also made jokes and you’ll see that if he hadn’t been taken for a madman, he would have been destroyed by now.

The laughter continued to come out of their throats loud and lively and finally, they decided to visit and be introduced to the lady in question. They were placed for the same night. They would gather in this same square to, from here, with some food and good French wine, go to the church, where they would celebrate a small feast in honor of the beautiful marble girl.

When the time came and everyone was close, they marched in the direction of the church where their friend was staying. Once there, they were greeted by a man who was waiting for them at the door. They entered the temple, which was completely dark, so the captain sent his assistant to make a great bonfire which, at the same time as illuminating them, would provide them with warmth, because the atmosphere was somewhat fio. The fire was lit with part of the doors of the church and chunks of choir chairs and soon illuminated the room while making it more pleasant.

The first thing they did was to open some bottles and have a few drinks that were heated inside. Soon they moved to the tomb where, with all sorts of exaggeratedly burlesque bows, they were introduced by the captain to the lady. Upon seeing her, everyone agreed that she was a beautiful woman and that the penalty was that she was made of marble, recognizing that if the resemblance of the effigy was faithful to the original, she had to be one of the most beautiful women of her time.

The companions asked him if he knew the name of the young woman and he replied that because of the inscription on the mausoleum, it was Doña Elvira de Castañeda and her husband Don Pedro López de Ayala, who fought with the Great Captain in Italy.

The party continued more and more animated, uncovering bottles and more bottles that were decanted by the attendees and that when they were empty were thrown against walls and altarpieces. But while his companions sang and nonsensical thanks to the alcohol ingested, our captain remained silent, without taking his gaze away from the statue of Doña Elvira.

The friends went to him and made him toast. Then, raising his glass in front of the statue of the warrior kneeling next to the woman, he toasted him for his emperor who had given him the opportunity to come to Toledo to court his wife in her grave. He toasted for it and the captain, swinging, reached the sepulcher and drinking a sip, expelled the wine he kept in his mouth and poured it on the face of the dumb warrior. When this was done, he approached the statue of the woman exclaiming that only one kiss of his would soothe the ardor that consumed him.

This was censored by all his friends, who were somehow frightened by the behavior of his companion, telling him to leave the dead alone. The young man did not pay attention and staggering, as he could he reached the statue and was ready to embrace it and give him a kiss. But as he stretched out his arms, a cry of terror flooded the room. He had collapsed at the feet of the tomb, pouring blood from his nose and mouth. The officers, surprised at what they saw, were immobilized without being able to take a step to help him. By the time his comrade tried to bring his burning lips closer to those of Doña Elvira, they had seen the motionless warrior next to him raise his hand and knock him down with a tremendous slap with his stone glove.