The current Mudejar temple of Santa Leocadia rises above the house in which the Toledo virgin lived . Under this church there is still a subterranean, next to the main altar, which was the room where the saint spent long hours doing prayer and penance.

Towards the fourth century AD, Rome dominated the peninsula, and had appointed Publio Daciano as governor of the lands on which the city of Toletum was settled. He came to Hispania with the clear objective of persecuting and subduing Christians who did not want to recognize the emperor as their God. A few days after his arrival the new praetor ordered the publication of a harsh edict placing Christians outside the law and ordering their persecution and imprisonment.

The persecutions began and there were many residents of Roman Toledo who were taken to the prison located in the ” Roca Tarpeya” , where, incommunicado, they waited for the time of their death being thrown over the precipice that ended in the Tagus.

Little by little the Christian ” resistance” to accept the Emperor and his religion was decaying in the city, but one day Daciano’s spies informed him that a tender young woman, educated in the monastery of the Daughters of Elijah, called Leocadia (which means white woman) insisted on praying to the Christian God and making public signs of her Faith. Once the young woman was captured and taken to the dungeons near the Praetorium, the torturers exhausted all the bullshit they devised to transform their belief to the Emperor’s wishes. Seeing that this was not possible, and that the young woman did not cease to invoke and pray to her God, she was cruelly whipped. There she was abandoned, almost dead.

I’m sure you’re also interested: Why do they drink in a botijo on August 15 in Toledo?: El agua de la Virgen (Toledo Cathedral Tradition)

On a December 9 night between the years 303 and 306, the sentries of the prison, which was located in the area near the present Alcazar, and not long ago known as ” of the Capuchins” , felt a supernatural noise and observed a powerful light coming from the cell in which the young Christian had been abandoned… For fear, until the following morning they did not approach the dungeon, where they only found the rigid body of the young Leocadia.

Daciano was made aware of the incident, and he ordered that it should be the corpse thrown, as was customary in other cities, behind a ruined pagan temple, which was located in the Vega, near the right bank of the Tagus. Leaving through the door closest to the Amphitheatre, a chariot carried the remains of the young martyr and arriving close to the river, the body was abandoned without receiving any burial. 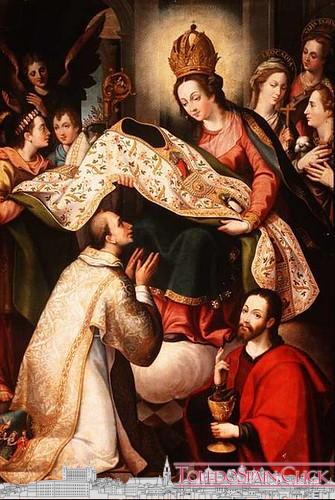 Once night had come, a group of faithful Toledans, who were still secretly resisting their Christian faith, having seen how the body of the young woman was thrown behind the temple, approached the spot to bury the remains of Leocadia. With some stones they raised a small and disguised mausoleum in which during long years of Roman domination many approached in the darkness of the night to pray for the soul of the young virgin Leocadia, keeping in the memory for generations the place where the remains were buried.

Years later, when the Christian faith was recognised as part of the Roman Empire after the edict of Milan given by Emperor Constantine, a temple was dedicated in the same place where it was buried, around the 4th century, the first one being built in this capital, and made Basilica during the Visigothic period under the reign of Sisebute around 618, the place where the famous Councils of Toledo were held and where the archbishops of Toledo Eladio, Eugenio, Ildefonso and Julián were buried.

Also in the place where Leocadia was imprisoned and where she died (in the lower part of the eastern side of the Alcázar) a church was built which, renovated by Alfonso X, has not reached our days.

The remains of Santa Leocadia have suffered many ups and downs throughout history*: