A handful of curiosities and Christmas anecdotes related to the city of Toledo. Happy Holidays to all.

In the past, Zocodover was covered with herds of live turkeys, chickens and chickens, baker’s stalls, zambombas, figures for ” births” , nougat stalls, pickled vats and piles of walnuts and chestnuts with figs to make ” turrón de pobre” which the bargueñas sat on the holy floor.

The numbers of the ” fat” of the national lottery were anticipated by the local press on blackboards before the Madrid evening newspapers arrived with the complete list.

Newspapers cultivated friendly innocents: a fire at the Teatro Rojas, the installation of a Toledo – Bargas tramway…

OBISPILLO’s PARTY AND OTHER TRADITIONS

Formerly during the night of Christmas ” farces and hors d’oeuvres” were represented in the cathedral but as the show was not to go beyond the discreet limits that the sanctity of the place demanded the Cabildo was forced to suppress these representations in the Christmas of 1577 allowing only Christmas carols and other things ” that the singers can do without mask and without removing the over-necks” . Cardinal Sancha also suppressed the ” bishop’s feast” which was celebrated in the cathedral at the end of December and which was like an innocent pious woman. The clerics at the service of the temple chose by vote from among them a small episcopal mitre that was worn for twenty-four hours; with the 3,000 maravedíes that the chapter gave him, he invited the other altar boys to eat who had to obey him in everything during that day in exchange for the lamb.

Some of these traditions have been recovered again, such as the ” Canto de la Sybila” , as we read in a recent news in ABC Toledo (20/12/09):

The song of Sybila and the Offcium Pastorum has Hispanic origin and was interpreted in the tenth century in the Hispanic-Mozarabic rite. It was celebrated until 1835, but the expenses incurred by its organization, which the work and factory of the cathedral could not bear, forced its suspension. It was executed in 1867, but was interrupted again until 2006, which was celebrated again on December 29 within the act of opening of the 400th Anniversary of the foundation of the school Nuestra Señora de los Infantes de Toledo.

The song of Sybila was performed in the matins of the night of Christmas Eve. Lessons, verses and psalms were sung. When I was about to begin the sixth lesson, the Sybila, a clergyman or infant dressed as an oriental woman who carried on her left shoulder a reliquary with written verses, was interrupted and left the sacristy. He was accompanied by two clerics or infants dressed as angels, who carried in their hands Roman swords and two other clerics with lighted axes. They were placed next to the grille of the main chapel. The Sybila sang the verses in Castilian language to plain song. At the end of each verse, the angels clashed their swords while the choir intoned the chorus. At the end of their song, the Sybila and her companions entered the choir greeting the canons, who congratulated them and gave them the aguinaldo. Afterwards, the Rooster’s Mass began. 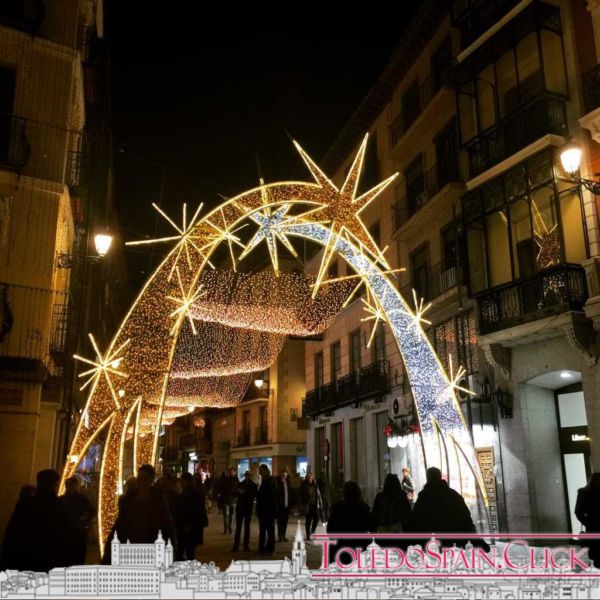 Among the documents preserved in its Municipal Archive is a request submitted in 1629 for the Consistory to publish a side on the need to illuminate the streets of the city in such marked festivals. In the text it can be read: ” The night of Christmas, anxí by the solemnity of the celebration as by the many people who walk spilled by the City, has been judged by very combeniente and of much glory of our Lord, are ençiendan luçes in the windows, especially in the main streets, that besides being demonstration of joy by the birth of the Prince of the çielo, many imcombenientes were avoided that usually open that night and the people who bath to the Churches, to maitines, will go with more comfort and security” .The full text of this old application can be consulted on the Toledo Municipal Archives website (www.ayto-toledo.org/archivo) along with other documents from its collection. Among them there is also a heartfelt congratulation that in 1786 the Marquis of Cogolludo and Duke of Santiesteban sent from Madrid to the Imperial City: Your Excellency. My very dear lady: To the finesse and expressions that Your Excellency makes to me on the occasion of Easter, I correspond hoping that in them and at all times I will achieve the greatest happiness and that our Lord will keep Your Excellency for many years. These words were a reply to the congratulations sent by the Town Hall. From the early years of the nineteenth century manuscripts used by the Consistory to transmit their best wishes to nobles and authorities of the homeland are preserved: In the announcement of the Easter of the Holy Birth expresses our attention with the most glorious reason the wish that Your Excellency achieves the happiest in which our respect is interested as long as it is of the greatest pleasure …, reads one of the texts dated 1804. A few years later, around 1843, the first postcards for Christmas were printed and marketed in London and became popular under the name of christmas.