Toledo’s cathedral has countless wonders that make it a unique space. But today I would like to focus on a painting that we found on a wall located to the right of the Puerta de los Leones. It is the figure of St. Christopher, which in ancient times was very common to find painted in churches and city walls. An article by Carlos Dueñas Rey with photos by Toledospain.

The elegance of the cathedral of Toledo , which is not eclipsed by the rigour of its columns facing the sky, is striking when you visit it. It is a temple of five naves and very few people realize that the side naves are wider and lower than those that court the central nave, this gives a pyramidal effect that makes the primate temple a unique space well harmonized and a haven of peace impossible to imagine when we come wandering through the narrow streets surrounding the cathedral. 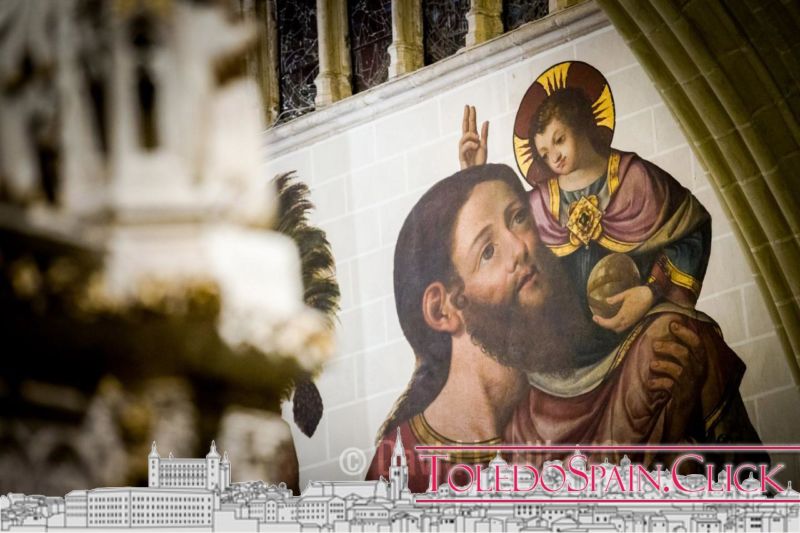 We also see red hats hanging everywhere, they are the capelos cardenalicios of the different prelates that the diocese has had. There is an old adage that says that if the chapel falls, it is that the cardinal has gone to Heaven. The cathedral of Toledo has countless wonders that make it a unique space. But today I would like to focus on a painting that we found on a wall located to the right of the Puerta de los Leones. It is the figure of St. Christopher, which in ancient times was very common to find painted in churches and city walls.

Legend has it that Christopher’s real name was Réprobo , but when he converted to Catholicism he changed it to Christopher, which means ” conductor of Christ” and it would be with this name that he would be known in western iconography.

Réprobo was a man of great corpulence and physical strength and longed to stand next to the most powerful king of the Earth, therefore remains next to the king of Canaan but realizing that the king fears the Devil abandons his lord and seeks the angel infernal, but immediately notes that the Devil fears Jesus of Nazareth, so he decides to go out in search.

And he finds it through a poor hermit who baptizes him and teaches him various ways to reach Jesus. Because of his physical strength he sends him to meet people and to help the travelers and pilgrims to cross the rivers since there were hardly any bridges in that area. One day a child asks him to cross the river, Christopher puts it on his shoulders and as he entered the waters he noticed how his legs barely held him, when he reached the other shore he understood that this Child was Jesus. Christopher had carried on himself the Supreme Maker of the world with all his weight.

Soon after, Christopher became famous with his preaching and the testimonies of his life traveling everywhere. He went to Samon, belonging to Lycia, where he managed to convert about fifty thousand people. Soon the King would distrust this preacher and tried to dissuade him from his teachings with stratagems; first he sent him two women: Aquilina and Nicea, but these failed and managed to convert them being martyred for it. The King understood that he could not overwhelm Christopher and then promulgated his martyrdom with great torments, being even saeteado with hundreds of arrows. Here a miracle happened, when an arrow hit an eye of the King and he cured with the blood of St. Christopher when he was finally beheaded.

To visualize a painting of St. Christopher supposed to be safe from death, at least in the next 24 hours, tradition tells… Hence it was painted in large size in churches and cathedrals

During the Middle Ages St. Christopher acquired great preponderance through the Golden Legend and is usually painted on the walls of churches and at the entrance to cities – as I said at the beginning – and the bigger it was painted was believed that his protection was greater , because according to that legend whoever looked at it even from afar, would not die of sudden death in the next 24 hours. He was immediately proclaimed as a saint and protector of many dangerous offices and is still considered today as the patron of drivers . In Toledo we affectionately call him San Cristobalón , because of the grandeur of the image.

When we look at the image in our cathedral we notice a detail: the legs are too small in relation to such a large body. This admits two versions: The first is what I have commented before, that when crossing the river carrying the Child God, he felt how his legs weakened by the ” enormous weight” that he carried and the second is that it is known that when a body gets into the water the deflation of the light when crossing it, this body becomes deformed. Whichever version we keep makes this painting exceptional and if we approach we can even see many fish around the legs of the Saint who we are happy to be able to accompany them also the passage of such an extraordinary burden.

The one who counts the fish will receive a wish.

An old joke that is always made to the youngest when they first see the monumental fresco is to ask how did this great painting get to its place in the Cathedral, if it is bigger than any door? To which after a while of thinking one can answer: in cans of paint.

I’m sure you’ll also be interested: Where to find the sheds in Toledo