Defined as one of the greatest jewels of Christianity, the ” Custody” of Toledo Cathedral, a tower of more than two meters of gold and silver, runs through the streets of the city during Corpus Christi.

In the ” chapel of the tower, or of the treasure” , under the tower of Toledo Cathedral and after entering through a Plateresque door with the sculptures of the ” Domine, quo vadis?” , we enter the enclosure that contains some of the greatest riches of Toledo Cathedral, over which the ” cathedral monstrance” stands out. 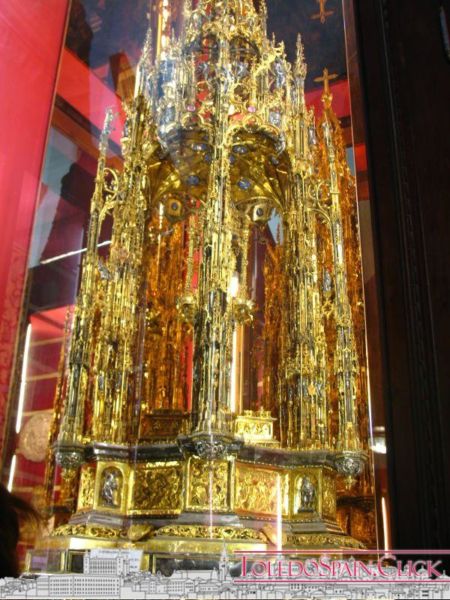 Custody of Toledo Cathedral, in its previous exhibition space

Actually, it’s two. In the central part there is a small, Gothic-style ” ostensorium” or ” hand monstrance” , commissioned by the Catholic Queen at the end of the 15th century to a Catalan jeweller, Almerique, who used 17 kilos of the first gold brought from America by Christopher Columbus, as well as gems and various enamelled figures. The Toledo canon Alvez Pérez de Montemayor, by order of Cardinal Cisneros, bought this small monstrance in the will of Isabel the Catholic in ” one hundred and thirty-four thousand eight hundred and sixteen maravedises” , giving it to the Cathedral in 1505.

As Cisneros was left with this custody, he entrusted the silversmith Enrique de Arfe with another custody to enhance and house the previous one. This German master carried out between 1514 and 1524 the great monstrance of silver of Gothic-Flamingo style, in exchange for 2767 reales and during seven years of work, and that today we observe walking through the streets during the two days of Corpus Christi. The town hall was so satisfied with the jewel that at Christmas 1523 it gave an aguinaldo of 2,500 maravedíes to Enrique de Arfe so that ” thirty pairs of chickens could be bought” . In total, up to fifteen million maravedíes had to pay the Cathedral for the custody (to make an equivalence, say that with 2000 maravedíes a cow was bought, which gives us an idea of the amounts invested)

At the end of the 16th century, this large monstrance was gilded to match in colour the smaller one inserted inside. Today this monstrance is considered the most eminent piece of goldwork in all Christianity.

The final result of this new monstrance was a complicated set of openwork pilasters joined by means of filigree arches and needles to form a temple in the shape of a Gothic tower (which some compare with the tower of Toledo Cathedral), two and a half metres high and weighing more than 200 kilos (exactly 183 kilos of silver and 18 kilos of gold), containing 260 statuettes, placed under canopies or small embossed vaults. In Toledo cathedral there is a replica of the monstrance in the centre of the altarpiece of the Capilla Mayor and carved in wood. 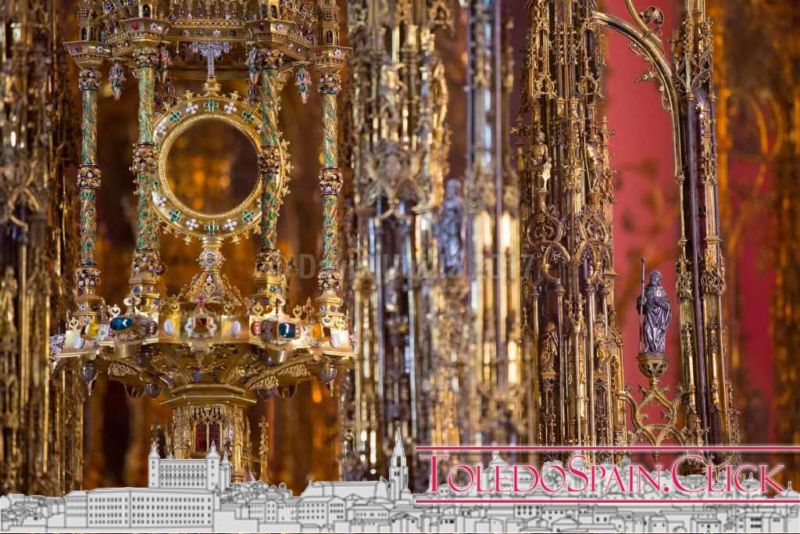 Enrique de Arfe not only left the finished jewel; he also wrote a manual to dismantle and reassemble the 5,600 pieces that compose it by means of the corresponding 12,500 screws, which has served on several occasions for its cleaning and restoration, the last one in 2002.

The exhibition of the monstrance in the treasure room of the Cathedral is carried out on a silver and bronze base, with four angels in the corners, made by the Toledo silversmith Manuel Bargas in the middle of the 18th century, according to the design of Narciso Tomé.

It is in the dates of Corpus Christi (currently only one Thursday in June) when this jewel can be observed in all its splendor, in the passing under awnings through the streets of the city. On this route he uses a carriage built in the 18th century which, by means of a special mechanism, keeps it always vertical, in spite of the existing unevenness.

The monstrance has travelled and has been threatened on several occasions: the French invasion endangered such a precious treasure, and Cardinal Borbon saved it from the rapacity of Napoleon’s soldiers by taking it with him to Cadiz, where it remained until the end of the War of Independence.

– Programming of activities during the Corpus in Toledo.