The selection of ten images that I present here is very personal, inspired among other things by, in the first place, good friends, by the ” virtual collection” that I have maintained for a long time in this Web and by the quality of them. It is not a ranking. Without being an expert in such art, I dare to share what I consider the ten most impressive photographs of Toledo. Let’s get to it.

Toledo as never before photographed

Photo: Photographic Association of Toledo. The idea was to try to illuminate the city in a different way, in one of the best known panoramas, from the Valley. A magnificent collective work made on September 25, 2010. By the way, soon there will be another one similar…

2. Toledo between the clouds

Photo: Ismael Jordá (enlarge on Flickr.com) This image was taken from a commercial airplane in January 2011. Fogs cover Toledo very often in winter. 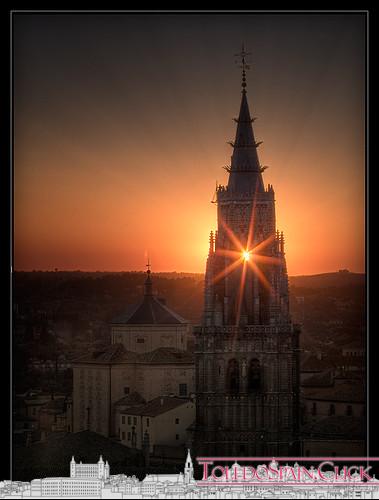 Toledospain is a magnificent photographer and as this image from the Alcázar shows. A ” magical” moment that was very kindly lent to me for the book ” Navigando por las Leyendas de Toledo” (Navigating through the Legends of Toledo). The photo is from February 2009. Visit his personal website here. 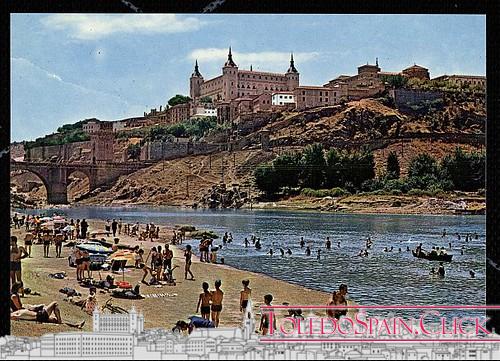 This postcard does not stand out especially for its invoice, but for what it represents for the Toledans. A clean, crystalline Tagus river, as it was not so long ago. This photo is not a montage, was made in the 70s, and can be seen, among many others in the magnificent blog ” Toledo Forgotten” in this link.

José María Moreno Santiago is one of Toledo’s great photographers. In his personal Web you have numerous examples. In this case more of the fog Toledana. Although it appears here in the fifth position, it is the ” initiator” of the one that appears in first position.

Photo: Conde Orlok at Flickr.com (enlarge) Storm over Toledo on the night of June 25, 2010. The storms over the city create a very special moment, especially if you have the courage to walk through the streets of the Casco or take photos from the Valley, like the one we observe here.

Photo: Bore on Flickr.com. The colors that sometimes illuminate the sky above Toledo overshadow… Image taken in March 2005.

I’m still waiting for ” perfect picture” on Toledo’s sheds. But the one in seventh position is a good example. on Flickr.com

By Herman Van Hulzen on Flickr.com. People who see this picture say it has ” something special” . It will be the frame, the cold light, the tomb that dominates it… The Toledo Cathedral is unique for taking photographs (in the image, the Chapel of San Blas). A pity that is not allowed…

Photo: J.Lozano on Flickr.com. It’s not a touch-up. The door has this lighting. And it’s not the door to Hell. That’s on your left.

And a gift: Offering to Toledo

Although retouched, this photograph reminds us of the paintings of El Greco… La tomó to311235 en diciembre de 2008 (Flickr.com)

In ” Favourite Photographs of Toledo” you can see more than 1100 photos that their authors share.