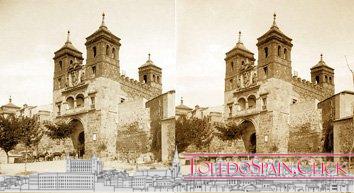 ” Of all the views of Spanish cities, the landscape of Toledo is one of the most characteristic” Alois Beer (Austrian stereoscopic photographer) Toledo, for all the art it houses, its monumentality, natural environment, customs, popular types and especially for its Arab and Jewish past that was taken as exotic, was one of the favorite destinations of romantic travelers of the nineteenth century who passed through Spain.

With the arrival in 1839 of photography, through Daguerre’s procedure, many travellers captured their experiences with their cameras through the worlds they discovered, seeing them later in intimate evenings with family and friends, as well as marketing them in their countries of origin.

As in our real vision, the lenses of the camera or cameras used must be separated from 6.5 to 7 cm, which is the average distance that separates our eyes. In order to take this type of photographs we use a binocular camera, two cameras of an objective juxtaposed and with the synchronized shots, or a single camera that once made the first shot will have to move it laterally scarce 8 cm. to make the other.

I’m sure you’re also interested: Have you ever seen the Milky Way over Toledo?

Once the images have been positioned, the two photographs are mounted side by side on a glass support (currently in disuse) or on a cardboard. The stereoscopic pair can be contemplated through a viewer with lenses called a stereoscope or by means of direct vision techniques.

Really, what it is about is tricking the brain into processing the information received from each of the eyes and fusing both images, making us believe that we are seeing in three dimensions.

If today it is curious to see the astonished face that produces in people the first time they look through a stereoscope, satiated by the thousands of images that bombard us every hour by infinite media, imagine that of the spectator more than a century and a half ago where, until then, painting, engraving and lithography, was the only form of representation to see foreign and exotic countries, apart from the trips, naturally, that were only within reach of a few privileged ones.

Within a few years stereoscopic photography was a great success, becoming a bourgeois fashion, whose desire for knowledge had to be satisfied with the production of millions of stereoscopic images. The first large photographic-editorial industry and a big business had just been born.

Stereoscopy lived its golden years until 1870 when it began its decline. With very specific ups and downs in the bridge years between the 19th and 20th centuries, it has now almost disappeared, becoming a collector’s item or a cult technique.

Spain was one of the countries that had to be included in the stereoscopic catalogues, and logically, the images of Toledo had a privileged place in all of them. Foreign stereoscopic photographers or companies, who sent their own photographers or required the services of commissioned photographers, and who included images of Toledo in their catalogues can be cited before the turn of the century: F. Frith, Ferrier & Soulier, Ernest Lamy, London Stereoscopic Company, Adolphe Block, Jean Andrieu, Alexis Gaudin & Frére, Frank M. Good or León & Lévy. Around 1900, they visited our city to take its characteristic views: Alois Beer, H.C.White Co., Keystone View Company and Underwood and Underwoood.

On the national scene, in the 19th century, the stereoscopic images from Toledo, made by the omnipresent Jean Laurent, Alfonso Begué or Luis León Masson, stood out. Already in the first third of the 20th century, the Barcelona photographic-publishing companies Alberto Martín and Rellev marketed several series of views of Toledo. 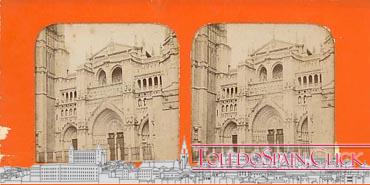 The stereoscopy was not left out and thanks to the Verascope system, created by the Frenchman Jules Richard, today we can enjoy thousands of gelatinobromide crystals of 4.5×10.7 cm. It goes without saying that many of these small crystals spread all over the world contain images of the Tagus, the Cathedral, San Juan de los Reyes, the Alcázar, the bridges of San Martín and Alcántara, or the doors of Bisagra, Sol and Cambrón.

To immerse yourself in the mute of stereoscopic photography, you must consult:

– http://www.stereoscopy.com/ (Alexander Klein. The World of 3D-Imaging). In English. 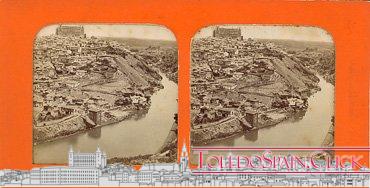 * Stereograms assigned for publication at toledospain.info