On other occasions we have written articles about photographs taken by tourists visiting the city and published on the Internet. In this text, we show some of the best snapshots of the Toledo Cathedral.

The Cathedral of ” Santa María” of Toledo contains numerous riches, being one of the largest temples of Christianity. In these pages we have written several articles with curiosities and anecdotes, which you will be able to consult at the end. The aim of this text is to compile some of the ” thousands” of photographs published in the free photo hosting service ” Flickr.com” , providing a brief explanatory text of what appears in the image (click to enlarge).

Mural by [[San Cristóbal]]. The Catholic tradition, transmitted above all in the Aurea legenda of Santiago de la Vorágine, describes him as a giantcananeo, who after his conversion to Christianity helped travelers to cross a dangerous ford carrying them on their shoulders.

Legend has it that on one occasion he helped the child Jesus cross the river; surprised by the weight of the infant, he explained that it was because he carried on his back the sins of the world, after which he baptized the giant and entrusted him with the preaching. The name of Christopher (from the Greek Χριστοφοροσ, Christophores , ” bearer of Christ” ) would come to him from this feat.

The legend, considered apocryphal from ancient times, continues to be popular, even though the Vatican officially proclaimed it non-canonical in 1969. (Wikipedia) Hence the size of this mural in Toledo Cathedral, which occupies an enormous wall in one of the side naves.

The night in Toledo is one of the most magical moments. The [[Catedral de Santa María de Toledo]] stands out among the tangle of roofs. The vast majority of photographs are taken during the day. Toledo is not a city for an afternoon or a day. Stay one night and you will discover another city. 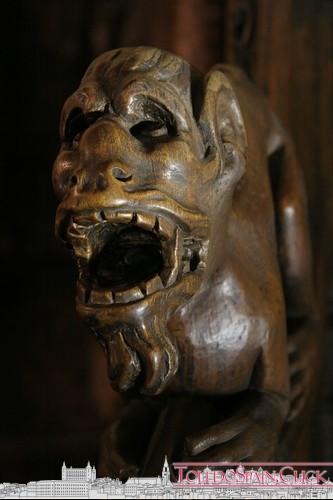 Photo on Flickr.com by jonathan

The choir , located in the central nave, as in most Castilian cathedrals, houses a unique wooden sculptural work: the high masonry, made by the great artists Felipe de Borgoña (or Vigarny) and the Castilian Alonso Berruguete, and the lower masonry, an older work, by Rodrigo Alemán. In the photo, one of the most photographed details of this masonry, which stands out for the great variety of religious and profane sculpted themes.

The façade of the Cathedral, enclosed in a narrow square (although one of the largest in the old town) is illuminated during the day with numerous shades. The stone gives shape to three large doorways: Puerta del Perdón (in the centre), Puerta del Juicio Final (on the right), and Puerta del Infierno (on the left). 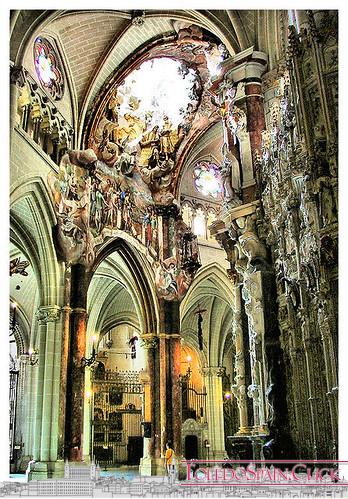 A unique architectural solution given to allow the passage of light to the apse and illuminate the tabernacle, is the so-called ” transparent ” , a fusion of sculpture, painting and architecture and peak work of the Baroque in Castile. 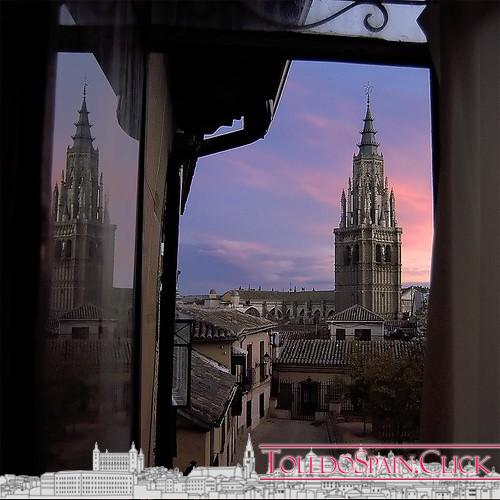 The tower is one of the most visible architectural elements from any point in the city, even though the Cathedral is not in the highest area of the Toledo promontory. Gothic tower, with some Mudejar influence. The tower is topped with an arrow that supports three crowns imitating a tiara.

The cathedral is one of the buildings of this type that has conserved more stained glass windows. It was built from the 14th to the 17th century, plus the 18th century restorations. During the Civil War, they suffered considerable deterioration, although they have been completely repaired. Light is a very important element in this cathedral, as you will see if you are lucky enough to visit its naves at sunset or sunrise.

Sure you’ll also be interested: A weekend in Toledo (Updated)

There is almost unanimity among art historians in affirming that the space occupied by the so-called ” Mozarabic Chapel ” is a twin tower built to the never finished (sometimes it is said that for lack of funds). This architectural solution apparently disfigures the usual configuration of the Castilian Gothic cathedrals (such as Burgos, León…), but it is also true that the square that extends in front of the façade is not excessively large and possibly the two towers would ” whip” the spectator.

A curious photograph: the maintenance of such a large space requires modern techniques, such as this ” spider crane” in charge of carrying out some repair or cleaning. 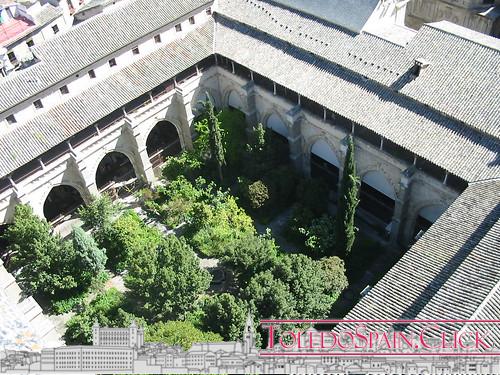 Cloister of Toledo Cathedral . Built over the old al-caná or alcaná (Hebrew commercial district), previously destroyed and ” bought” by Archbishop Pedro Tenorio, as the legend goes: When the fair was located in the place where Pedro Tenorio planned its construction, the owners of the stalls and shops were reluctant from the first moment. Eugenio Narbona tells of the archbishop’s interest in occupying as soon as possible ” the alcaycerías, which is the place where markets are sold” .

During the time when the archbishop and the owners were discussing buying and prices, misfortune came in the form of a fire that destroyed the entire market.

Pedro Tenorio then took advantage of this for his purchase and, here the legend, he was accused of having caused the disaster in order to be able to acquire the land.