Skip to Content
Home Toledo Views Looking back: Zocodover in the summer of 1936

Since the birth of photography, Toledo has been photographed. The dark days when the Alcazar was besieged and destroyed some photographers were in battle taking numerous images.

Thanks to the state archives that still keep them and the good work of the blog “ToledoOlvidado” we have been able to create some simple montages to compare the situation of some points of Zocodover in those days and today.

The idea is not new. There are discussion forums on the Internet and some group on Flickr.com (link) that have been publishing these types of composite images for some time now/past.

It consists of looking for a photograph of the ” past” and making a montage by superimposing or combining a current photo. The results are very curious and allow us to compare the state of a building, street or population in the last century, for example, with today.

Toledo has also changed since the last century. In some cases more than it might seem. In our case, we have chosen some shocking photographs of Zocodover Square from the terrible and bloody summer of 1936.

The [[siege of the Alcázar de Toledo]] was a lamentable moment of death and destruction among brothers, which should never be repeated.

Troops of the Republican government tried by all means to expel the entrenched from Toledo’s fortress, without success.

The following photographs, with all due respect to those who died on both sides and those who lost family and belongings, show the harshness of the combat in the Plaza de Zocodover, combined with the current situation of those same spaces:

Surely you are also interested: Of droughts, great snowfalls and a certain bearded woman in Toledo in 1561 (Curiosities of Toledo, part five)

This first composition shows a militiaman pointing his gun at the Alcázar, from the corner of Zocodover with the slope of Carlos V. Didn’t you imagine when you were eating your hamburger sitting on the peaceful terrace of that well-known fast-food chain that a militiaman not too many years ago was shooting a few meters away? 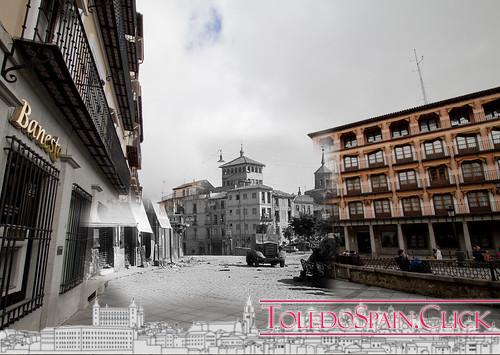 In this case we have chosen a photograph that shows the end of the Cuesta de las Armas and part of Zocodover with remains of the days of the siege. The building of the current Delegation of the Government (among other dependencies), in the right part of the image, had already been bombarded. 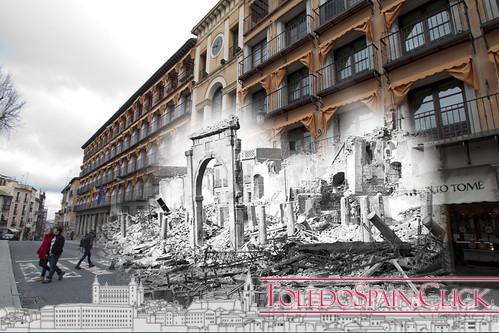 In this other image, I didn’t get the perspective of the original. There were too many people and too many vehicles passing by… But it allows us to get an idea of the state of the building. Only the Arch of the Blood was preserved standing. 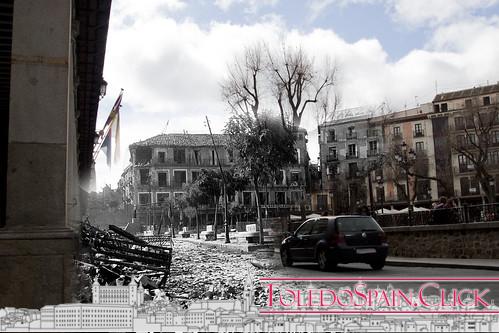 Another perspective of Zocodover, with the rubble still on the roadway of the building destroyed during the summer of 1936. In the background of the image (click on the image to enlarge) you can see some of the typical establishments that existed in those years combined with the present ones. 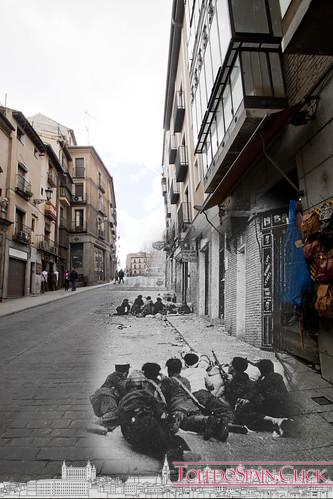 The Cuesta de las Armas offers us a curious perspective of parapetados militiamen pointing their weapons at Zocodover. Combined with an image of February 20, 2011. A very risky photograph of making that summer of 1936 and, although it is not comparable, also today, by the number of cars that turn at full speed in this curve.

I’m sure you’ll also be interested in: The definitive panorama of Toledo?

At the moment that’s all, but there’s still a huge amount of ” black and white” photographs that Eduardo continues to compile and publish in his magnificent blog ” ToledoOlvidado” and which is an inexhaustible source for this type of curious montages. I also hope that the original photographs serve all those who visit this page to take into account the importance of coexistence, conservation of heritage, and trying by all means to prevent a tragic event such as a war between brothers happen again.