The “Plaza de Zocodover” is the main square of the city of Toledo. Meeting point for Toledo and visitors.

Without a doubt, it will be the first square you find if you come to Toledo, as soon as you go up the escalators of the Miradero.

We can guess that its name comes from the Arabic: sūq ad-dawābb and comes to mean “market of beasts of burden”. Precisely, it is what was sold in this square, pack animals.

Moreover, next to the Plaza de Zocodover, is Calle Sillería (where our office is located), which is where the horse saddles and those animals that were sold there in the plaza were made.

It was also a place of inns and inns as it was a transit area for travelers who came to the city.

In fact, in the novel “Ángel Guerra”, by Benito Pérez Galdós, the Posada de la Sillería is mentioned and this street is spoken of as a place of passage and hustle and bustle.

This square has witnessed innumerable events that now, little by little, we will discover. There is a lot of history that this main place in the city of Toledo has.

In addition, around it, there are some of the main monuments and museums of the city such as: the Alcázar of Toledo, the Museum of Santa Cruz, the Center of Modern and Contemporary Art of Castilla-La Mancha…

Another of the places that is also located here is the Palacio de Congresos… In addition, also, in the surroundings of the Plaza de Zocodover you will have some places where you can have tapas and try the typical gastronomy of Toledo. 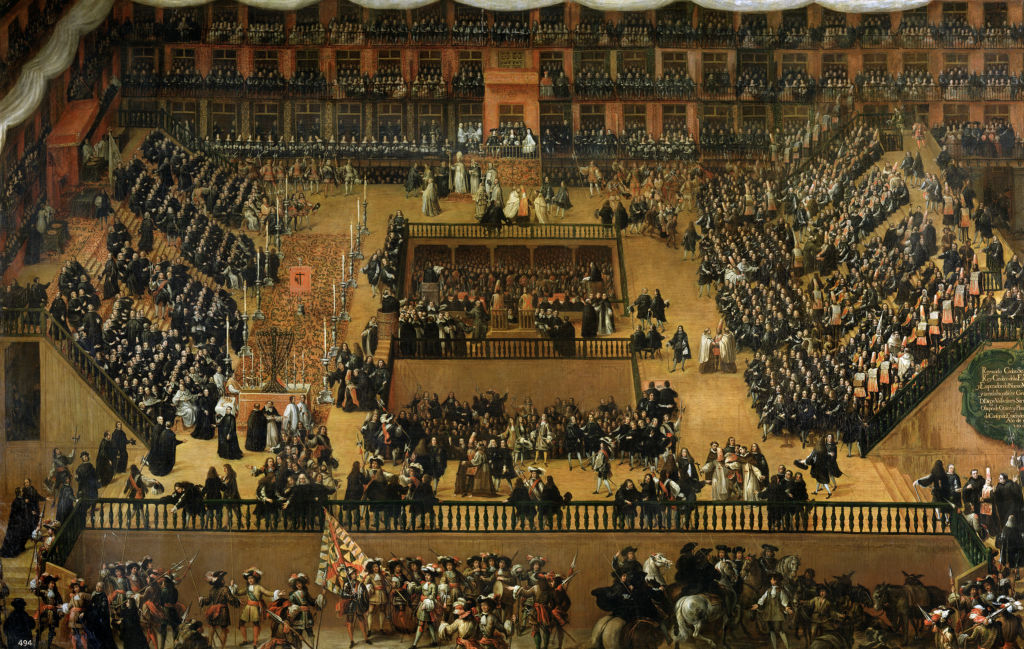 The Arch of the christ of the Blood

The first thing that will catch your attention about Plaza de Zocodover is its irregularity. It has nothing to do with the layout of other Castilian squares! Moreover, under the main clock in the square is the Arco de la Sangre.

This arch receives this name because, right on the balcony that is under the clock, there is the image of the famous Christ of the Blood, which can be seen from the outside at important moments such as during Holy Week in Toledo.

This old gate was known as “the gate of the horses” and separated the Arab military compound (the Alficén) from the medina (of the city).

In addition, all that rectilinear side (where traffic passes towards the fortress today) reminds us that, through that same place, that line of separation wall passed between both enclosures.

If you go down the Arco de la Sangre, you will come across the statue of Miguel de Cervantes. You cannot leave Toledo without taking a photo with him! In this same place was located the famous Posada de la Sangre where it was said that the famous Mesón del Sevillano could be, where part of the novel “La Ilustre Fregona” takes place.

Also, next to the “Arco de la Sangre”, in the arcades, is the Government Delegation in Toledo.

Today, the square is very remodeled. According to what Pisa tells us (and Julio Porres mentions it in his book “Historia de las Calles de Toledo”, Volume IV) many of the balconies that were scarce before were built at the end of the 16th century to be able to see the games and shows that took place. They held in the square.

They would form part of the reform projected by Juan de Herrera. Possibly, from these moments, it is the facade that is located between Calle Barrio Rey and Cuesta del Alcázar.

In the Plaza de Zocodover there was room for all kinds of events and celebrations. Games, tournaments, festivities, markets were held here… Also, the square has been a place of reception for high-ranking personalities throughout history… Even here the Autos de Fe of the Inquisition used to end. 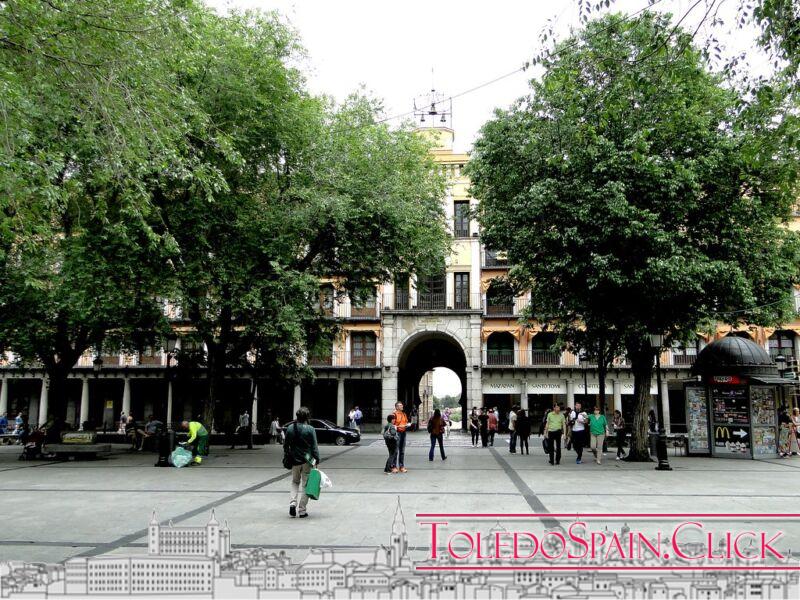 Did you know that, in the Plaza de Zocodover, the Clavicote existed?

Do you know what it is?… It was a cage where those corpses were deposited that people who died alone on the street or in hospitals in Toledo and that nobody took care of them.

In Toledo, one of the oldest brotherhoods that exists is the Brotherhood of Peace and Charity. She was in charge of collecting these bodies and depositing them in this cage.

El Clavicote had a kind of piggy bank where people could leave alms that would be used for votes. Also, in the Plaza de Zocodover, was the pillory, a stone column where the bodies of the executed were exposed to serve as a public mockery.

In the 19th century, in the last third, the square was also the place where the famous “Tuesday” was installed.

We could not ignore the Plaza de Zocodover as a movie set. The square has witnessed the shooting of films such as “An American in Toledo” (1965), where some of its scenes take place in the Zocodover square itself.

It also appears in the film “You will not wish the neighbor of the fifth” (1970). Another of the famous films that have the Plaza de Zocodover as a setting is “Tristana” (1970).

In itself, Toledo is already a movie set since, in its streets, history seems to have stopped.

In addition, our proximity to Madrid means that many production companies choose Toledo to recreate some historical settings or to carry out period shoots.

So now you know a little more about the history of this emblematic square in Toledo. Meeting point of Toledo. This square has witnessed the passing of the history of Toledo, its people…

Do you want to know how the history of the Plaza de Zocodover has passed through photography?

We recommend the blog entry on “Forgotten Toledo Blog”, by E. Sánchez Butragueño. And the photos!