Skip to Content
Home Toledan Curiosities Christ of the Blood in Zocodover, Toledo

Many of the visitors (and inhabitants) of Toledo are unaware that on the Arco de la Sangre that gives access to Zocodover there is a small chapel that keeps old traditions and an important Christ of the same name.

During Holy Week, if you pass through this central square, you will see how the chapel opens windows and lets us see what is hidden there. 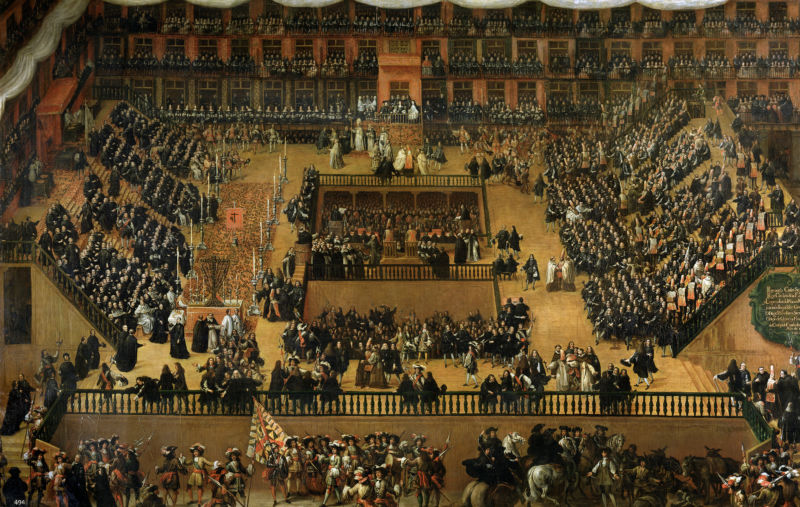 The one known today as ” Arco de la Sangre ” was part of the wall of the Alficén at the time of the Muslim invasion. The current arch was probably a gate that connected the Alcazaba with the Medina. This gate was called bab-al-Yayl (horse gate) and later Puerta Alfadá or Puerta de la Explanada.

Its current name is due to the fact that the image of the Christ of the Blood is hidden above this horseshoe arch in a small chapel that is usually closed and visible from the Plaza de Zocodover. The image comes from an old brotherhood founded in the times of Sancho III, but the chapel was not created until the reign of Henry IV.This peculiar location follows the Arab custom of placing an oratory over some doors and arches to ensure a good journey to anyone who leaves the city and crosses the door.

According to Marina, in the ” New Guide of Toledo” (1892) the chapel had three balconies, which ” usually open in the dark and show the sacred effigy of The Christ of the Blood, (which) belongs to the Brotherhood that under the invocation of Precious Blood of Christ founded the king D. Sancho el Deseado, to assist the prisoners condemned to death.

In this period many people without resources of any kind died of various diseases or wounds, drowned in the Tagus, and also executed, and these confraternities sought the means for their burial. That of the Christ of the Blood essentially provided spiritual assistance, while that of Charity paid for the burial of the executed.

For this purpose, the corpses of the deceased were exhibited in the centre of Zocodover in a kind of oval temple covered with a dome called ” Clavicote “, looking for alms to facilitate their burial. When there was an event in the square, this Clavicote was moved under the Arch of the Blood. 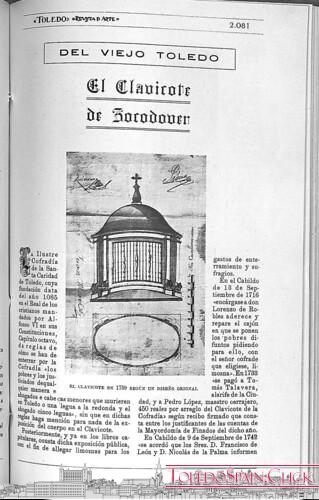 Article about Clavicote (via Toledo Forgotten)

As Rafael del Cerro Malagón (Archivo Secreto, 2008) indicates, around 1814 the ” wooden cage” known as the clavicote was removed from Zocodover, ” arranged for the exhibition of corpses of needy people and their subsequent burial under the auspices of the Brotherhood of Santa Caridad, in 1830, it is possibly noted what would be the last public execution in this plaza where bullfights were no longer taking place.

Other uses were also given to it, as Pisa pointed out: ” On the arch where this square [Zocodover] goes out to the hospital of the Cardinal, ay vna chapel on high, which is one of the coadres of the precious Blood, in which it is customary to dezir Missa, so that those who are occupied in selling do not remain without oyrla: those which for the time that the Missa was said, cease to negotiate.Francisco de Pisa ” Description of the Imperial City of Toledo” (1605)

In the fire of the building during the Civil War, as Goitia Graells points out in the Toletum magazine, the archive that was conserved in the chapel was burned.

The way of proceeding of this Brotherhood was the following: ” once the sentence, condemning to death, had been pronounced by the court or competent authority, and the date of entry of the convict into the Chapel had been indicated, this authority communicated it to the two Brotherhoods (Blood and Holy Charity) which immediately proceeded as ordered in their Constitutions.

First of all, the Brotherhood of the Most Holy Blood of Christ installed the Chapel in the room indicated by the Warden of the Prison, withdrawing once this was done, and then, Holy Charity was present in the act of communication to the defendant of the sentence dictated (…). At the time of his departure for execution, he was taken care of by the confreres of the Most Holy Blood of Christ, who from that moment travelled around the city begging for alms for suffrages.

The Brotherhood of the Most Holy Blood of Christ accompanied the accused until the moment of being executed, retiring and stopping begging alms from that moment.

The body, elapsed the time that the authority indicated, was taken in some platforms, carried by the Brothers, formerly to the Clavicote installed in Zocodover and later to the Cemetery that the Brotherhood possessed in the Pradillo del Carmen (and that later moved to the Vega Baja).

In this same document very curious data are noted about several executions that we recommend to read.

Suárez Quevedo points out in the article ” Sanctified Leisure and Business. Sobre el Cristo de la Sangre en Toledo: cofradía, imagen, puerta y capilla de Zocodover” the following: ” Its invocation obviously refers to a crucified Christ, presumably a sculpture in polychrome wood, but it could also have been another material, or perhaps a painting or a standard; the latter even as an insignia in addition to the corresponding carving which, in the becoming of this association or confraternity of charity or Christian piety and the vicissitudes of its headquarters, must have been several, always crucified, as the most appropriate referent of a good death for the aforementioned prisoners, under the protection of the redemptive blood of Christ.”

“Parro confirms, on the other hand, that the aforementioned confraternity had as an institute to assist the prisoners who are going to be executed, from the moment they are put in chapel until the moment they die (because in dying they are already in charge of the Confraternity of Charity); In the same way, he clarifies that when an execution takes place, as a warning to the city and to exalt its pious mission, they place a velvet cloth incarnated with a golden gallon, and embroidered with the same embroidery in the centre of the Royal coat of arms [it is understood that those of Castile by the foundation of Henry IV] and the coat of arms of the brotherhood, (which consists of the five wounds of the Redeemer dripping blood), hanging from the parapet of the balcony of the oratory, saying there a mass for the eternal health of the prisoner, without prejudice to make the other suffrages to reach the alms collected.

Finally, this illustrious chronicler of the Imperial City alludes to the fact that in his time, towards the middle of the eighteenth century, the custom of opening the balcony in the centre of the Chapel at dusk was still continued, which remains so until quite late in the evening, with the illuminated image appearing with more or less lights, depending on the alms, since the brotherhood only pays the oil for a lantern that is seen in the centre of the chapel; but it seldom ceases to have two, four and even more lights that the devotees supply, taking care to turn them on, such as opening and closing the balcony, a doorman dependent on the corporation, who wears incarnate in the public acts of it, displaying a large silver shield on which are engraved the weapons of the brotherhood. Suggestive and very suggestive semblance the one that glosses us here Parro, with the Christ of the Blood thus exposed and illuminated in the night in his Chapel of the toledana square of Zocodover” . (As we can see in Utrilla’s photo at the end of this article)

In the page that the Municipal Archive has in the Web of the city we contemplate several photographies of the Christ of the Blood, conserved until 1936: 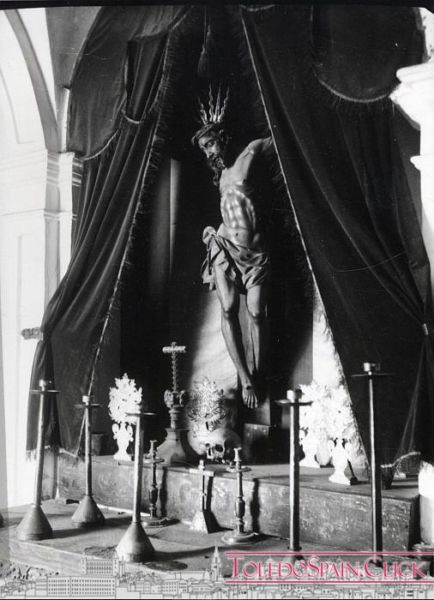 The destruction of this area of Zocodover in the Civil War directly affected the chapel (it had already suffered at least one other fire in 1589).The current arch as we know it was rebuilt in 1945, as it was practically destroyed during the siege of the Alcazar:

As can be assumed, the Christ currently found in the chapel above the Arch of the Blood is a replica, as the original was destroyed in the siege. The current one, photographed on Holy Wednesday (4/4/12) by Toledospain for ” Toledo Secreto” is the following:

* The bibliographic sources used in this file are mentioned and linked in the text.