From a very young age, His Royal Highness Alfonso XIII used to visit Toledo. Even several times a year due to its proximity to the Court located in Madrid and to the train that almost reached the Toledo wall. Maneuvers, troop magazines, delivery of offices… But in the year 1908 the occasion was different: the Japanese royal family visited the city and above all, I was delivered the office as a new Lieutenant, in the Alcazar of Toledo. Know the legend ” El fantasma del Alcázar de Toledo” (The ghost of the Alcazar of Toledo).

Part One ” The Phantom of the Alcázar de Toledo”

Since the installation of the General Military College in Toledo in 1846, there was no such illustrious day in the city for the militia. Those were the beginnings of what later became known as the General Military Academy, in 1882. Toledo was decorated, received the international leaders and visited the Cathedral, San Juan de los Reyes… A real honour for the city and its residents. 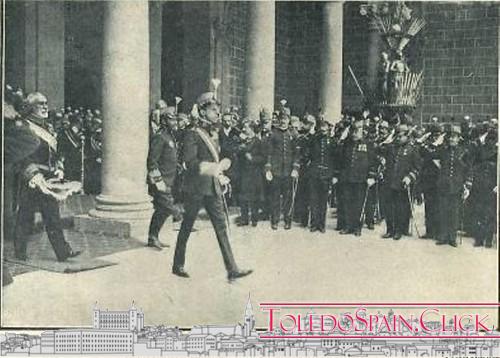 Alfonso XIII in the Alcázar of Toledo

It was a hot July 14, as I will never remember another in Toledo, and after a hard day of training in the courtyard of the Alcázar waiting to receive H.M. the thirst made even more dent in our tired bodies by the days of preparations prior to the Royal visit. After spending several hours trained in the courtyard, and after the ceremony and the words of HM the King, we would have time to celebrate the ” Feast of the Infantry” through the streets and squares of the city. On that day the museum of the Spanish Infantry was also inaugurated, a curious disdain that made me destiny… 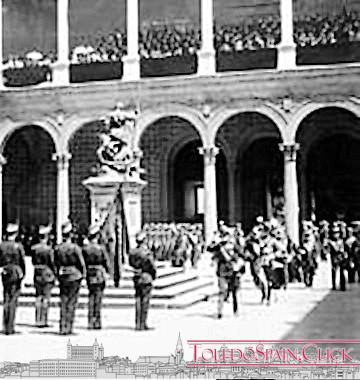 Visit of Alfonso XIII to the Alcazar of Toledo

That dark and hot night there were several of us who left the fortress of Toledo on the way to dirty taverns in search of the precious wine they served in earthenware jars, although also some companions took their steps trying to get a girl in some lupanar not too far away… I do not remember well the details of that night, because soon the alcohol began to make a dent in a body accustomed to exercise and unfamiliar with night parties. The scarcity of my memories consists in the hard blow received with the pedestal of the statue of Carlos V dominating the Furor that Alonso de Covarrubias had to melt in the center of the patio, and that some step in conjunction with the darkness and alcohol made me recognize in such an unpleasant way…

Although the awakening from such a hard blow was not worse, because it was still at night and with less heat, but a multitude of rubble surrounded me, it seemed that part of the Alcazar had fallen with me once I hit the sculpture…

Rejecting that stupid idea, what surprised me the most was hearing loud voices and some thunderous noise that I wanted to recognize as gunshots. I stood up as I could and watched what looked like armed soldiers, but with uniforms that I couldn’t identify. I cautiously decided to approach some of the men who stopped pointing their weapons through huge openings in the facades, and trying to attract their attention I could not, although at one point some of them turned their heads and I could observe a certain rictus of terror in their eyes…

I approached one who was writing and being unable to get his attention, I noticed that he was writing down a diary, seeing terrified that the date that started the paragraph was September 18, 1936… I thought it was a mistake, that the soldier had made a mistake in his notation… But suddenly the man noticed my presence and turned his weapon to where I was. I tried to ask him what happened, that if some foreign power tried to take the city, but the young man began to shoot, which made me run out through the courtyard watching in the distance through another of the huge gaps that incredibly seemed to have destroyed part of the Alcazar that the night was beginning to end. I entered through another one of the doors leading to one of the towers, taking a lamp of some kind of greasy material that someone had left there, because everything was still in total darkness. Suddenly, a strong explosion made me lose consciousness again, throwing me against one of the walls and leaving me half buried.

The last thing I observed from that moment onwards were soldiers running around me and pointing to the outside, shooting I don’t know very well which forces are trying to enter the Alcazar…

I had the feeling that I had been buried for a long time, although when I woke up again everything was in a strange calm. It was no longer covered with debris, there were no more shots. I was at the beginning of a staircase, everything very well cared for, clean and giving the sensation of freshly painted… I looked through one of the windows overlooking the street which was again at night, but I was surprised to see numerous points of light with great power in the street. I decided to go up the stairs, and through an enormous corridor I came across a door which, when I opened it, left me stunned: huge shelves containing thousands of books; a large room with a multitude of tables and chairs and objects that I could not identify… Everything was in absolute tranquillity, except for a door that was opened at the other end and there appeared what resembled another soldier, but without a weapon and with a strange light in one hand. Sir! I shouted, to which the man responded with a halo of the light he was carrying and I could see a grimace of terror just before fleeing the way he had entered. I tried to follow him through the door, but when I opened it, I entered a different room, a huge space with columns that I never remembered having seen in the building…

At one end I saw a young woman sitting on the railing, which was very high. I approached her carefully and tried to speak again:

– Please, you have to help me, because I don’t know what’s happening to me, nor do I recognize this space…

He replied with a sweet voice:

– Don’t be afraid for me, or for yourself. Little can happen to us now. It’s been a while since we’ve belonged to the world around us.

Everything around me, the sudden changes I had experienced, the lights, the people I had terrorized with my mere presence now made sense in this terrible Meccano.

– How is it possible that we’re here then? I asked once more.

– Time will make you understand everything. It’s not that simple, because I’ve carried more than you within these ancient walls… Now I have to leave.

-Wait! I shouted. But the girl jumped up and when I appeared, she was no longer…

It began again at dawn. In a calendar on one of the walls of this new enclosure I observed that it was July 19, 2010. As I approached one of the huge windows I could see how they were beginning to form soldiers dressed in a uniform very similar to the one I was wearing that night more than 100 years ago. 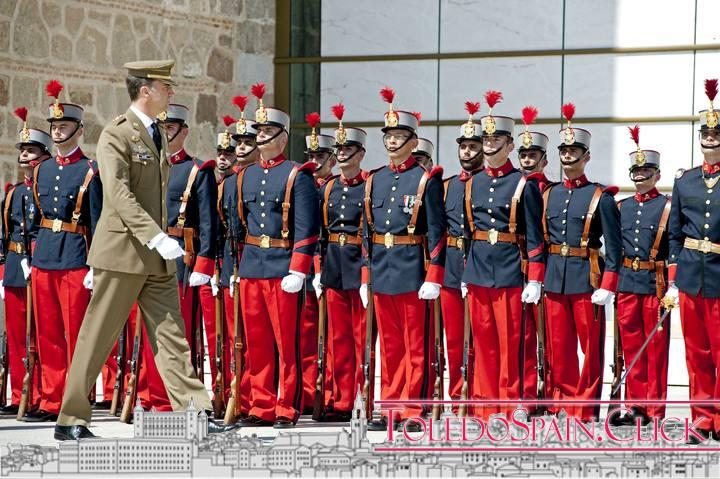 TO10. TOLEDO, 19/07/2010.- The Prince of Asturias, reviews before the opening ceremony of the Army Museum in the Alcazar of Toledo. EFE/Ismael Herrero

Inauguration of the Army Museum in the Alcázar de Toledo. Fountain: RTVE

Now I understand everything. I witnessed the explosion of a republican mine during the Civil War… I visited the Library’s reading room… And now I’m at the opening of a new Army Museum. The books that are now sold in a shop inside the museum have helped me with a lot of time, which I have, to know better the history that I have lived, without wanting it. The blow to the head that night ended my life.

Now I keep watching everything.

If you walk through the galleries of the Army Museum in the Alcázar de Toledo and, like so many others, you feel that someone is watching you, with no one around, perhaps it is our grieving soldier, who tries to draw your attention by looking for a way out of his eternal walk.

This you just read is just one more story or legend. The stage and its history has been as we have narrated it. Our Lieutenant is not inspired by anyone. You won’t find this legend in any other book, magazine or publication. Please, if you reproduce it in a work, in a blog, forum or in another Web, it quotes its author: Juan Luis Alonso. And put a link to toledospain.info.

The visit of the Japanese royal family took place on July 14, 1908, as can be seen in the press of the time (link to the ABC newspaper library) Alfonso XIII gave offices to the new lieutenants trained in the courtyard of the Alcazar. We don’t know if they went to celebrate it later…

On the morning of September 18, 1936, the Republican side attempted to assault the defensive position held by rebellious forces in the Toledo Alcazar. In the days prior to that date, miners coming from Asturias dug a tunnel to approach the walls. The explosion was observed and felt miles away. After a hard subsequent confrontation, the Republican army did not manage to gain access to the square, which remained occupied for a very short time. (Detail of the assault in photos) (Narration of the assault)

Finally, on July 19, 2010, H.R.H. The Prince of Asturias inaugurated the new Museum of the Army, with the funds of the former Museum located in Madrid. Thousands of people visit it weekly.

The photographs accompanying the text belong to the magnificent blog ” ToledoOlvidado.com” , unless otherwise indicated.