The Devil is not only part of the Toledano Street map. The cathedral also houses among its Gothic walls one of the most ” infernal” legends of the city; a recurrent theme in the Toledo legends that we now bring to these pages with ” The Confessor Devil” .

The nobleman Don Ángel de Arellano was one of the best known and most respected in the city of Toledo. He lived with his son Gonzalo in a small palace in the alley of San Pedro, in the heart of the city and not far from the Cathedral. Many respected Don Angel for his kindness and wisdom, and the nobleman wasted much of his time helping anyone who could.

He believed that with his good deeds he could bury the bad fame that his son had in the city, because the young man, at his few years was already an example of pettiness, evil and all the worst adjectives that a nobleman should not accompany his surname. There was no fight in Zocodover in which the honor of the Arellano was not compromised, a girl who did not see her honor sullied by the dirty verbiage of the young man, an economic bet of which Don Angel’s pocket would not have repercussions or lies that came from Gonzalo’s mouth. Everything bad that the father had avoided during his long life was part of Don Gonzalo’s daily life.

After time had passed and when the father’s patience came to an end, Gonzalo happened to fall in love with a beautiful girl, the daughter of a poor fisherman from the Tagus. Sagrario was his name and his beauty seduced the hard heart of the young man. The simplicity of the young woman not only softened Gonzalo’s heart, but also provoked a radical change in the personality of the young man, to the point of becoming in a short time one of the most peaceful and honest men in the city. The acquaintances and the father himself did not believe in the change, which could only be explained by divine intervention or by some saint who had interceded for him.

But the pain came in the form of gossip at Don Angel’s house, because he soon discovered that the girl his son wanted was one of the poorest in the city, and this low condition was a major impediment for him to authorize his son’s marriage. This provoked not a few arguments between father and son, so hard that some neighbors heard screams in the middle of the night, during the day, and even affirmed to have heard in some occasion the cold sound of the toledano steel coming out of its sheaths…

PublicityA Holy Thursday, after a bitter discussion for the love of the young woman, Don Angel went to the Cathedral, seeking consolation and confessing his sins, but entering the Primate and seeing the great number of people who were waiting to tell the priest about their sins, because it was a feast day, he despaired, and being determined to leave the temple he observed an old and rickety solitary confessional, next to the Door of Forgiveness, more like a cupboard of old invoice, to which he decided to approach, kneel down and begin the account of the events that had taken him there. 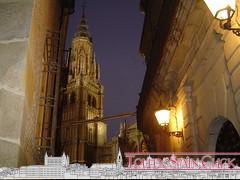 Shortly afterwards he was seen leaving the confessional with his countenance bathed in tears, giving the appearance of being terrified and as if the devil himself had seen in that place. Some approached the confessional, encouraged also by the small number of people at it and did not find any priest in it, thinking that Don Angel had gone completely mad.

The blood was gushing from the body lying on the ground. It was the blood of Gonzalo de Arellano, dead stabbed in the back with the dagger owned by his own father. Don Angel gave himself confessing to be the author of the facts and so he confessed:

” I told the priest, in the Cathedral, how Gonzalo intended a young daughter of a fisherman, and this had led us to succumb to the insult and had almost caused greater damage if he had not left home on the way to confession. The voice in the confessional, deep, convincing, warned me of the few possibilities of recovering my son, and that he would fall forever in disgrace by marrying this woman. His voice was so convincing that the enormous sacrifice was not a problem, but a relief for my heart, and even knowing how hard the decision was, I followed the advice given by the priest and left the Cathedral towards the fatal destiny for my son, seeking the salvation of his soul” .

The Chapter confirmed that that morning no priest had confessed at the Door of Forgiveness. The sheriffs found the witnesses who saw Don Angel leave and confirmed that no one had been in the old confessional. What they all agreed on separately was the intense smell of sulfur that came off the inside of the confessional…

Shortly afterwards, in Toledo, the news spread that Satan himself, dressed as a priest, had taken confession and convinced Don Ángel de Arellano to murder his son, seeking to put an end to his kindness and the new love that had arisen, and condemning the soul of the father for all eternity.

The Cathedral removed the confessional in which the Devil had supposedly taken confession, and many Toledans took time to return to the Cathedral to confess their sins… Legend has it that since then, no one takes confession near the Door of Forgiveness.

I’m sure you’re also interested: The hand of the Devil. A legend from Toledo