The lady with the eyes without brightness

” The Lady with the eyes without Brightness.” The city inspires apparitions and mysteries narrated in the night of time, in different versions of the same myth that all the cultures that have dwelt here repeat over and over again. Now here we reproduce in its ” chivalrous” version one of the most repeated legends in the city of Toledo.

The Infanta Catalina of Austria, Duchess of Savoy received in Toledo a majestic party on a night that became memorable in the annals of our city by the unquestionable bearing of the attendees to such a resounding feast…

At midnight, when the bells were still ringing in the clock of the monastery of Santo Domingo el Real, close to where the act took place, one of the noble knights invited to the agape, at that time General Councillor of Finance and auditor of His Majesty Don Sancho de Córdoba, witnessed how a beautiful lady stealthily passed between the groups gathered there.

Attracted by the beauty of the lady, and the fascination she inspired, he approached her and invited her to accompany him in the dance that was beginning at that moment. She did not receive an answer to her words of praise from such a beautiful woman, whom she was now guiding. The sensation that emanated was of an extreme lividity of her face that even facilitated the sensation of not stepping on the marvelous carpet that adorned the area destined to the dance in such a beautiful palace of Toledo.

After finishing the dance, they went out to the outer courtyard, marvellously decorated with innumerable plants, in the style of how it is done in Toledo during the Corpus, which was not far away, and from which emanated a freshness accompanied by the murmur of a magnificently executed central fountain. It was cool at night and the lady did not cover her generous neckline with any warm clothing, so he put his red cape with a noble golden brooch on the shoulders of the lady, who walked without saying a word. Only after taking the cape on his white shoulders did he utter a complaint, a lament: ” How cold” .

Insurance that you are also interested: Godulfo (The Chasuble of a Saint)

He took the gentleman to the Lady for a short walk to his residence, and upon arriving near the Miradero, the lady broke her silence again:

– Gentleman, don’t take another step in my company, for to continue by my side would be a grave offense. The next day, send a servant for his cape to Aljibes Street, in the house of the Countess of Orsino.

The gentleman agreed politely in the hope that he himself would collect the cape.

The lady was lost in the shadows of Toledo’s night, as he watched her slowly walk away, fascinated by her gentle walk.

During the night, the gentleman did not stop thinking about the intriguing and cold beauty of the lady. But what intrigued him most was her gaze: her eyes had no brightness .

The next day, he personally went in search of the cape. The palace was in a narrow alley at the bottom of which was a cross. He knocked at the huge wooden gate and soon there was a sound of footsteps and a heavy bolt behind which a small door-panel was opened behind which an old man asked him what he wanted. He asked for the lady, to which the old man replied that no one lived there who answered that description, although he allowed the knight to pass, who was later received by a noble lady in mourning, to whom he told all the history of last night. The lady replied that it would probably have been the object of a heavy joke, since the lady to which he referred, by the remarkable description made, was his daughter and was already going for two months that she was dead and buried.

The gentleman regretted what he thought was a terrible mistake, and what was not his surprise that, seeking to leave the house, he lifted his eyes and contemplated a large picture representing a lady exactly like that of the previous night: the same face, the same dress, the same ring in his left hand…

– Lady, who is this beautiful lady?

– The same daughter I unfortunately told you I lost.

– But… if it’s the same one I accompanied last night!

– Gentleman, again you offend my house… You dream, perhaps, or you are prey of hallucination, because I already told you that he died a long time ago.

As spellbound he left this house and returned to his palace. He spent two days in terrible sorrow, sure of what he had experienced that night.

The next morning, a man introduced himself with the red cape, which he placed on the lady’s shoulders that night… He had recognized the owner of the cape by the weapons on the brooch he was carrying…

– Where did you find her? the gentleman asked anxiously.

– In the Holy Camp, next to the tomb of the Countess of Orsino.

Next we offer the version of the Legend ” hung” in Youtube and interpreted in the program of ” Cuatro” ” Cuarto Milenio” : 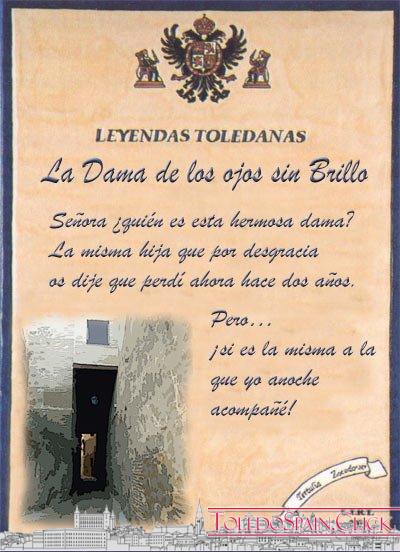 Ceramic plaque of the legend ” The Lady with the eyes without Brightness” .

See situation of the legend in ” Google Maps” .