1521. The Comuneros are defeated and persecuted throughout Castile. An affront to the Cathedral of Toledo unleashes one of the most terrifying legends of the city…

” The Penance of Bishop Acuña”
A Legend from Toledo Cathedral

By 1521, the Comuneros de Castilla had been defeated by the Emperor’s troops at the battle of Villalar. All Toledo was attentive to the bloody evolutions that the imperial reprisals took for all Castile.

When all was almost lost to the Communeros, Bishop Acuña enters Toledo with his loyal troops to oppose imperial oppression. All of Toledo exploded with joy and the bells rang with intensity.

The presence of Bishop Antonio de Acuña disturbed the solemn acts that had been prepared for Good Friday. While the office of darkness began and the death of Christ was commemorated in the Toledana Cathedral, in the deepest silence, in the distance a murmur of people was heard that was increasing.

Therefore, the doors of the Cathedral were opened by a crowd that was almost flying to Acuña, interrupting the solemn mass and shouting for the dark naves of the cathedral that Antonio de Acuña was appointed Archbishop of Toledo. Forcing him to sit in the archbishop’s chair, without being able to resist, the rest of the canons escaped as far as they could, leaving the prayer of darkness interrupted.

When this exaltation was over, the crowd withdrew and Acuna returned to her chambers. It is said that that night a dull murmur was heard within the walls of the Cathedral. Some say that it was the souls of the many buried there under its walls that continued the prayer of darkness interrupted by the fierceness of the crowd.

Not long after these events, Padilla was beheaded in Valladolid and Acuña hanged in the castle of Simancas. In the following years, it was said that once the nocturnal liturgical acts of Holy Week were finished, numerous murmurs and noises were heard in the Cathedral…

Time passed, and two centuries later, a curious traveller who listened to history wanted to verify for himself the veracity of these supposed murmurs heard on such important dates… On Good Friday he hid in a chapel and decided to wait until everything was quiet to see what was happening. Tired by the day’s racket, the traveller fell asleep. A murmur awoke him without knowing very well the moment of the night it was. Once he was on his feet, he approached the door of the chapel. Absolute darkness filled the high naves of the Cathedral. Only a few lit candles cast dark shadows of the images that received their light. When he arrived at the door of the chapel, he was frozen with terror. He saw a terrifying procession led by an archbishop with a sword at his waist. He saw acolytes, skeletons, ghosts, some headless, and the most deformed monsters in a ghostly row. Like an army defeated in battle, with heads bowed and with the appearance of repentance. In one hand they held a sword and in the other a torch that cast shadows on the statues of the cathedral. The murmurs that were heard outside, muffled by the walls of the Cathedral, turned into frightful sounds that led to madness. All the statues that were illuminated by torches as the terrible entourage passed by came to life and were incorporated into the procession. 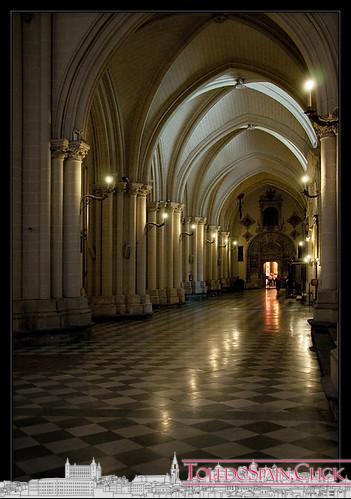 Inside Toledo Cathedral on Flickr.com by Toledospain

According to the legend, it was the Communards who purged their sorrows by going out the three days of Holy Week in procession through the Cathedral, for the affront they made by interrupting such a sacred mass.

Legend has it that when the traveller was found lying on one of the Cathedral’s naves, he confessed, purged his sorrows and expired with a horrible face of terror.