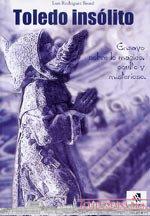 Toledo Unusual, Essay on the magical, hidden and mysterious

” Legend has it that, during Antiquity, many infernal beings, magicians, witches, astrologers, necromancers, Sortilegos, fairies and elves came to populate the rocky mound that would later become Toledo. Protected by infernal spells, they showed some of the inhabitants of that city the secrets of necromancy, cabal, alchemy and other cursed arts that since then have been known as the ” Toledan sciences” . This accumulation of forbidden knowledge remained hidden for centuries in hermetic manuscripts, or was engraved on the stone in the form of symbols, only accessible to those who knew how to interpret them…” .

The book by Luis Rodríguez, professor at the Faculty of Education in Toledo, proposes a ” fabulous walk in search of the secret arcana of this magical city, the encounter with the mysterious, the journey towards the occult, the analysis of all those elements that belong to the world of the magical” .

Themes such as the Table of Solomon, the Holy Grail, Templars, caves, Mummies, relics, elemental beings, enchanted places, black virgins or magical arts…, all have a place among these pages, which seek to rescue the most unusual part of the city of Toledo.

An indispensable book for anyone interested in what can be found ” beyond” the walls that close so many houses, palaces and convents nestled in magical Toledo.

You will also be interested in: Exhibition Witchcraft, unusual objects and fantastic creatures in Toledo.

Index to the second edition of ” Toledo Insólito…”

Foreword to the second edition.

Novelty 29/3/12: “” Toledo Unusual” is given to all customers of “Toledo Spain” in digital format from 5 April 2012 in a new edition revised and extended by the author in 2012. Toledo Spain organizes night routes around Toledo.