On Tuesday September 6 (2011) was inaugurated by various authorities access to the ” Big Bell” of the Cathedral, after 28 years closed to the public.

Below we offer all the data, historical, anecdotal and technical of this huge work that encloses the tower of the Cathedral in Toledo.

INAUGURATION OF ACCESS TO THE GORDA CAMPANA IN TOLEDO: on Tuesday, September 6, 2011 from 5:00 p.m. we tweet (text and photos) the official inauguration of the works to recover the rise to the Campana Gorda of the Cathedral tower (press release Toledo City Council) Emiliano García Page, Mayor of Toledo, the President of Castilla La Mancha, María Dolores de Cospedal and the Archbishop of Toledo, Braulio Rodríguez attended the event (see photos).

Since then it is possible to visit the tower and the Gorda Bell of the Cathedral of Toledo in the established schedules.

The visit to the Cathedral tower was closed in 1983 for security reasons. Since then only occasionally have some people agreed to visit the bell known as ” Campana Gorda” or ” San Eugenio” , the largest bell in Spain (according to campaners.org): 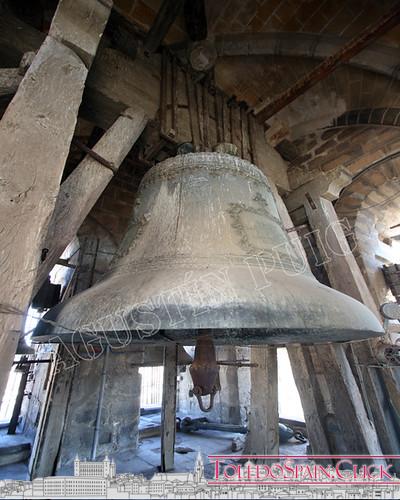 Campana Gorda, in a photo before the restoration Photo: Agustín Puig on Flickr.com

In the tower of the Cathedral, until not too many years ago you could visit one of the largest bells of all Christianity.

Dedicated to Saint Eugene, the following copla was sung from its installation:

It is suspended in the center of the last vault of the first body of the tower, has 35 feet of circumference, just over 12 inches high and about 11 inches thick, weighing 1543 arrobas. On the ground, fallen is the clapper.

On the north-facing side there is a cross with a Virgin of the Tabernacle on top and an initial of the name of Mary on the base; in the west the effigy of St. Eugene, and in the East a large shield with the arms of the primary cathedral and two smaller ones; it also has five long Latin inscriptions. 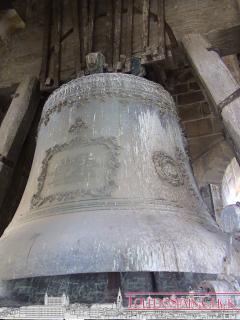 Great crack of 1.5 m filed so that it does not vibrate. However in the lower part, near the edge, there are inserted some modern screws, perhaps in an attempt to cold join both sides of the break, technology applied to repair, at sea, the engines of the boats, which began to be applied in bells, with negative sound results.

On the floor is the famous bronze clapper, also cast by GARGOLLO which has written on the upper part ” FRANCO / GONZA” , which may correspond to a visitor.

The bell has the iron clapper immobilized in the center by four thick diagonal wires. It is also equipped with an old, small external motorised mallet, partially dismantled and therefore out of use.

22 sailors, one frigate ensign and three ship guards to raise the Big Bell to the tower:

“” It is true that for the fat bell of Toledo although it is not so much that ” there are seven tailors and a shoemaker, also the bell and the bell maker” . Claims that are far from true circulate around the fat bell of the cathedral.

A paper printed one hundred and thirty years ago in the Imprenta Cea, located in Calle de la Trinidad and which was also sold in the now defunct Villatoro bookshop in Calle de Hombre de Palo at the average real price gives us curious and above all true references about its manufacture and placement.

Here they are: It was melted by order of Cardinal Borbon and weighs 1,543 arrobas; to weigh the mental used in its foundry was ordered to make a Roman capable of weighing up to 141 arrobas.

It was blessed by the auxiliary bishop Andrés Núñez, who renounced to collect the stipend that corresponded to him for officiating in the ceremony; in view of this, the town council gave him a bottle of tobacco and six handkerchiefs. 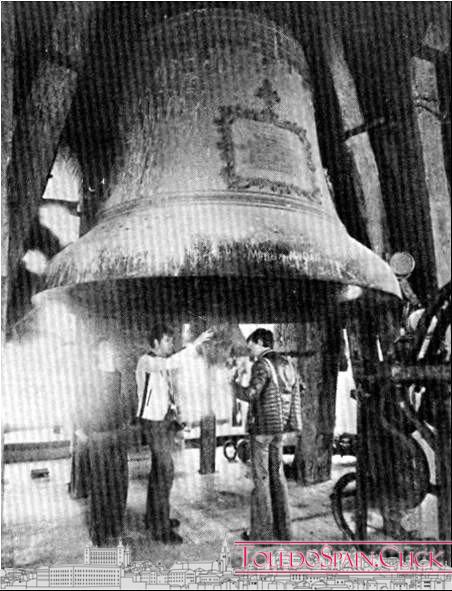 To raise it to the tower a neighbor of Toledo called Manuel Maldonado made four maromas and two ropes of hemp that weighed near two thousand kilos.

The operation of ascent to the bell tower between the natural expectation of the toledanos congregated in the square of the City council was made of the following way: from the house number 5 of the slope of San Justo where the master Gargollo had fused it – for that reason it was called from then on the ” house of the bell” – it was dragged to the foot of the tower next to the door of the Palms: ” the day 30 of September of 1755 – says the narrator who signs his work with the initials C.F.-. After seven days invested in the dragging from the slope of San Justo to the plazuela of the Town Hall, she climbed up and was conveniently disposed as she is now and with such security and splendour she directed these operations the bishop of frigate Don Manuel Pérez that with this commission came to Toledo accompanied by three guardians of ship and twenty-two sailors that were splendidly given away with a refreshment and rich present, each one according to its category.

To raise the bell to the tower had to build a large ramp and on it something like a track with two lanes on which slid a platform on which the bell was mounted, through a hoist or garrucha slowly climbed dragged by several pairs of oxen.

In order for it to enter the bell tower, the wall separating two of the lateral grilles had to be unraveled.

Two months later the bell broke when announcing the feast of Saint Leocadia:

It narrates the tradition that the first time it was made to sound it was heard from miles away and numerous windows of Toledo were broken by the intense vibration. At present there is also a deep break in one of its sides. 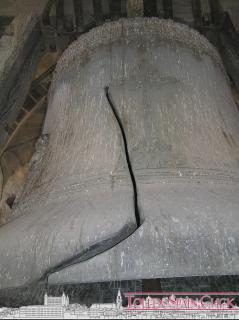 Thus, the bell remains broken from the beginning of its location in the tower. However, until the 1960s, with the last bell ringers, the bell was touched by means of the articulated lever and the inner iron clapper.

In 1992 the bell was tolled exclusively with an external motorized mallet, probably the same one that still exists today, of scarce dimensions for such a colossal bell (as a reference the diameter of the ball should be equal or something superior to the thickness of the lip).

The expert Web ” campaners.com” affirms on the enormous break that has ” la Gorda” :

” We think that the bell, which required unheard of efforts for its manufacture, came out bad from the beginning and that even the ” hair” , the very fine crack that later became the great current crack, could be present at the time of the first tests in the workshop. Precisely those great defects could have been the cause of the delay of the rise of the bell, which was around two years.

It is suggestive, to confirm our proposal, that a bronze clapper was manufactured at that time, suitable for the large size of the bell. It is usual today, among the founders of central Europe, to install clappers with the bronze ball (although the rod is made of steel, more flexible and economical) to improve the sound of unlucky bells, even in iron bells or waterfalls lightly.

The bronze against bronze softens the sound by reinforcing the lower and lower harmonics, while the blow becomes more powerful and is accompanied by higher harmonics in the case of being the sweet iron clapper.

In any case it must be of a material less hard than the bell, so that the tongue is worn and not the bronze, more difficult to repair or replace.

Consequently, everything points to the fact that the extractor hood, of extraordinary dimensions and carefully finished, was equipped with a bronze clapper to try to improve a bronco sound, due to casting defects.

The enormous economic and temporary effort that would be required to repeat the process could justify, on the one hand, the delay in deciding to raise it, and on the other hand, the provision of a bronze clapper to try to improve, minimally, the faulty sonority of the great bell. 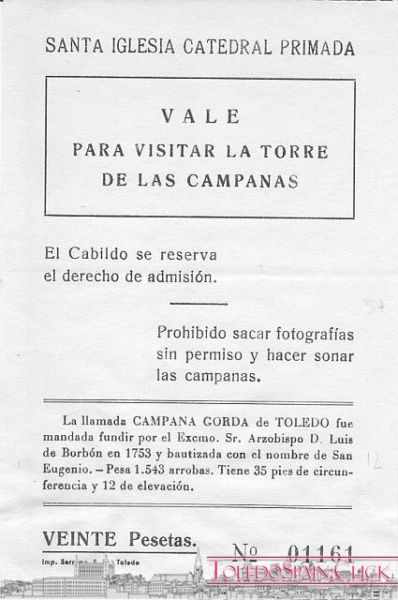 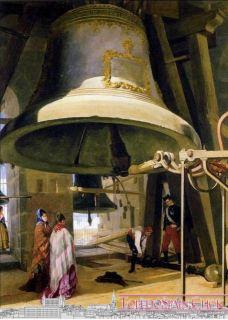