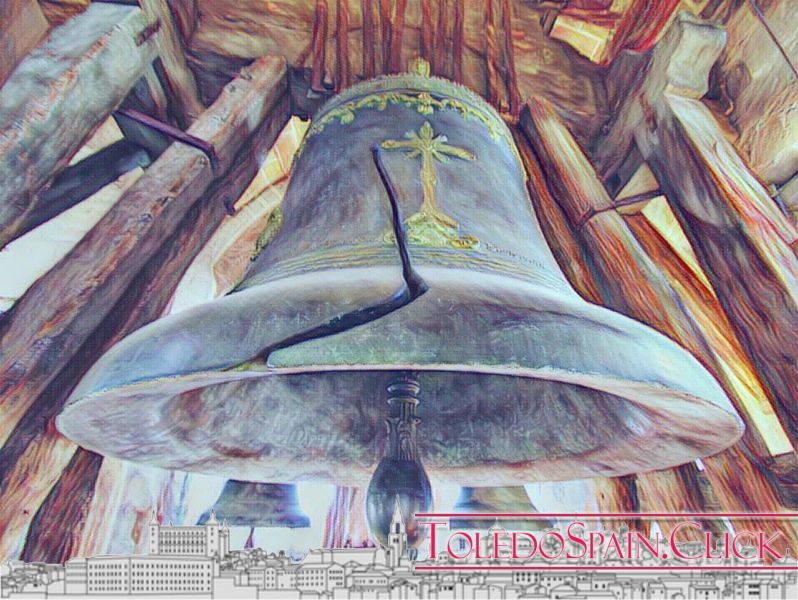 If there is a place in Toledo that holds a multitude of curiosities, legends and mysteries, it is the Cathedral of Toledo . In its tower, about 80 meters high, hides one of the largest bells in the world, which no longer rings. Do you want to know why? Do you want to know the legends about the ” Campana Gorda” of Toledo Cathedral? Come in and read on.

The Cathedral of ” Santa María” in Toledo, the Primate of Spain, is one of the largest and richest cathedrals in the world. We are not going to dedicate ourselves here to count all the riches that it treasures, we have already done it in other occasions, our objective now is to narrate, so that the smallest you can understand it, the legends of certain GREAT object that encloses its tower has since long ago:

In 2011 it was possible to climb the tower again, after a restoration, and visit one of the largest bells in the world (1). ” Saint Eugene ” , as this bell is called, was founded by Alexander Gargallo in 1755 by order of Cardinal Louis Antonio de Borbón. Its measures are: 2.29 meters high, 9.17 circumference, and 2.93 diameter. The weight, between 7.500 and 14.000 kilos, according to the source that is consulted. It has a large crack 1.5 meters high filed so that it does not vibrate, in which a hand fits. Due to this crack, the bell can no longer be rang, as the sound was not good. Here you will find more information about the Toledo Gorda Bell.

Once we have told you the basic data of the bell, we go on to narrate some legends that since its rise to the tower have been counted among the Toledans:

Halfway up the tower of Toledo Cathedral

Photo: currently you can visit the Campana Gorda. The climb up to the tower is very interesting, as you can visit places that were closed to the public for many years.

How did this great bell rise to the top of the tower?

The story goes that the bell was melted not far from the Cathedral, on the slope of San Justo, number 5, in a house that still preserves the large door through which the bell went out in a cart on its way to the tower. From there it was dragged to the Town Hall square in seven days, arriving on 30 September 1755. In four hours, starting at 6 o’clock in the morning, the bell was in the place it now occupies. The people in charge of raising such a tremendous weight up to more than 80 meters high were 22 sailors coming from Cartagena and helped by several oxen that by means of a great ramp and pulleys dragged the bell up to the top of the tower. In order to enter the bell tower, one of the side walls had to be broken and then rebuilt. 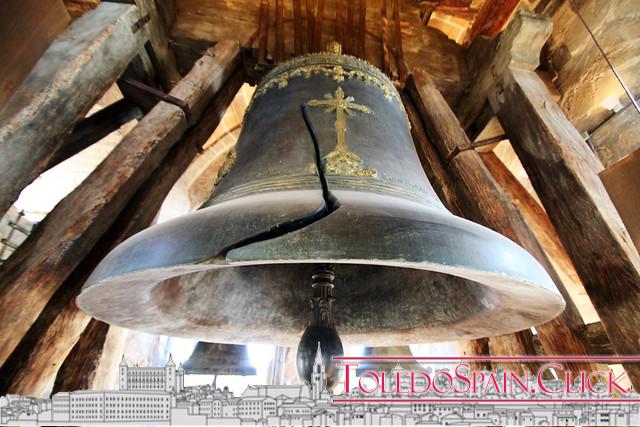 Legends about the Fat Bell

The great size of this bell made that from the beginning the toledanos invented some curious legends, arisen from certain curious facts that happened since its installation in the tower:

How could the Fat Bell have sounded?

As we have commented, the bell of San Eugenio is no longer played, because its sound is not good due to the breakage. To get an idea of how it could have been, we can see the following documentary of the Cateral de Pamplona, in which you can hear the bell ” María” ringing, 2.5 metres in diameter and 2.25 metres high, slightly lower than Toledo’s:

The second largest bell is in Cologne Cathedral (24 tons) in Germany, and this one works.