” There were two lovers in Toledo: Diego Martínez and Inés de Vargas. They had maintained premarital relations and she, in view of the knowledge that her father had of such a fact, demands that his young lover restore his honor by contracting marriage…” . 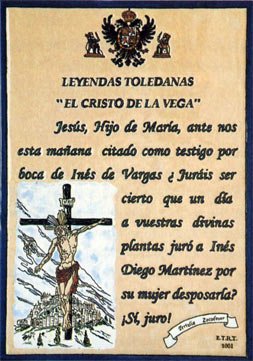 There were two lovers in Toledo: Diego Martínez and Inés de Vargas. They had maintained premarital relations and she, in view of the knowledge that her father had of such a fact, demands that his young lover restore his honor by contracting marriage. He replies that he must leave for Flanders, but that on his return, within a month, he will take her to the altars.

Inés, not sure of the waiter’s intentions, asks him to swear it. Diego resists until she manages to bring him before the image of Christ of the Vega and who, loudly and touching his feet, swears that when he returns from the war he will marry her.

” A day and a day, a month and a month and a year ago there was, but from Flanders did not return Diego, who departed to Flanders” .

Meanwhile, Ines withered from crying so much, drowning in her despair and grief, despairing without waiting, waiting in vain for the return of the gallant. Every day he prayed before the Christ, witness of his oath, asking for Diego’s return, because in no one else did he find support and consolation.

Two years passed and the wars in Flanders ended, but Diego did not return. However, Inés never despaired, she always waited with faith and patience for the return of her beloved to return the honor she had taken with him. Every day he went to the Miradero waiting to see the one who left for Flanders appear.

One of those days, after three years had passed, he saw in the distance a flock of men approaching the walls of the city and heading towards the gate of Cambrón.

Her heart was pounding because of the anxiety that was seizing her as she approached the gate. As he reached it, the group of horsemen passed through it. He turned his heart when he recognized Diego, for he was the gentleman who, accompanied by seven lancers and ten pawns, led the group.

He gave a shout, in which pain and joy were mixed, calling him; but the young man rejected her pretending not to know her and, while she was falling faint, he, with derogatory words and gesture, gave spurs to his horse and lost himself through the narrow and dark streets of Toledo.

What had made Diego Martinez change? Possibly it was his elevation, because from simple soldier, he was promoted to captain and on his return the king appointed him knight and took him to his service. Pride had transformed him and made him forget his oath of love, denying everywhere that he promised marriage to that woman.

The Christ of the Vega – ToledoFaced with this prodigious event, both young men renounced the vanities of this world and entered two convents… José Zorrilla