Two famous schools had Toledo: that of translators and that of Nigromance , in which wise men from all over the world tried to know the mysteries of the so-called ” Ars Toletana” , magic in its purest form that transformed men into famous necromancers, witches, sorcerers… Among them all, the Marquis Enrique de Villena stood out. Until his death he was surrounded by mystery.

Don Enrique de Villena could have been one of the many nobles who populated Toledo in the 15th century, a bustling city with more than twenty thousand inhabitants and curdled with convents, large palaces and mansions, presided over by temporal and perennial power, the Alcazar and the Cathedral. One more marquis if it were not for his notable fondness for occultism and alchemy.

Entering through the Puerta del Cambrón and dodging knights, religious, soldiers, noblemen, scoundrels and poor solemnity, who infested the streets, leaving aside the monastery of San Juan de los Reyes (where the remains of the Catholic Monarchs should have rested) and outlining the walls of the Jewish quarter was the palace of Don Enrique, located next to what are now known as the Transit Gardens. There the nobleman spent days and nights engrossed in his readings, with books brought from the most important libraries in the world, without worrying that the fearsome Inquisition asked him for accounts for his readings. Alchemy was the passion of our nobleman, but not with the objective of obtaining the precious metal, as others intended, because he did not yearn for more wealth than he had, but rather, being an old man, he looked for a way to avoid the black death, which was not far behind.

With the passing of the years, and thanks to the numerous accumulated readings, to his position as Grand Master of the Order of Calatrava and to the experience in the cellars of his immense palace, Don Enrique was already a famous necromancer, and it was rumoured by the city that he had been able to elaborate a mysterious concoction that would return him to life after death. 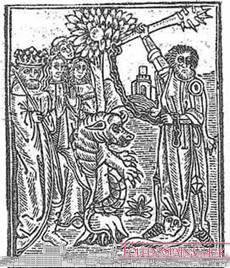 These rumors were not far away, because the nobleman was already preparing his ” death” , having indicated to his most faithful servant the steps to be carried out when this painful trance happened. He ordered his servant not to tell anyone when he died, but rather to hide the fact completely, disguising himself with his clothes and going every day to the 8 o’clock mass in the nearby church of Santo Tomé. The instructions did not stop there because he also showed him in the basement a large glass flask into which he should put his corpse, after dismembering so that the pieces could enter without any problem and in their entirety.