Skip to Content
Home Toledo Myths and Legends The death of Don Nuño Alvear, a Templar legend from Toledo

King Alfonso VIII gave the castle of San Servando to the Knights Templar to take charge of the surveillance and defence of the bridge of Alcántara and the access to the city. Today the castle is rebuilt and provides accommodation to many tourists who spend their nights between the sturdy walls in the hostel maintained there by the regional administration. What they don’t know, while they sleep, is that dark legends pass under their battlements…

The cold night of November and the hard wind of the storm that is approaching over Toledo makes Nuño Alvear, one of the Knights Templar who watches over the walls of the castle, look for shelter where there is scarcely one. Ten bells resound in several towers of the city and, after the services, the knights sleep waiting for a new day.

When Don Nuño comes to the castle in search of a little heat by the fireplace, he feels that something is not right that night… Dark omens that accompanied by the noise of the wind between the stones dye black, even more, the night in Toledo.

In one of those moments, next to the fire, in solitude, he thinks he hears a sinister voice that makes him tremble:

that you contemplate with anger the bristle

that cover your way.

Resign yourself to your destiny, resignation is pity, and then no

in your passage through life, stop the march undertaken,

that I am the eternal truth!

At the same time that the voice ends, the warning of the guard attracts his attention, someone approached the doors of the castle, and two loud knocks woke Don Nuño from the lethargy caused by the heat of the home.

I’m sure you’re also interested: The Lady with the Dull Eyes

– Someone is looking for shelter on this cursed night,” thought the gentleman as he made his way to the entrance, but before arriving, another guard had let a mysterious pilgrim pass inside. Something in her was terrifying… She was very old, her bony hands barely had the strength to hold the staff she was leaning on, her bare feet had barely any flesh…

– Don Nuño, evil Templar, I have come to seek you, I am your perdition, I am the eternal pilgrim to whom no one gladly opens the doors. The old woman said suddenly. Her voice had a strange accent.

– How do you know my name? What do you want from me? – The Templar asked in fear.

– I am the one you expected without knowing it and I also know that I am not well received, but what are we going to do? It has always been like this – replied the infamous pilgrim.

– Where do you come from, what are you looking for here?

– Where I come from is an enigma, but there I must return again – The old woman replied with a voice thread.

– Finish your chatter and tell them what you want, or I’ll have to throw you out of the castle!

– Nuño Alvear is coming for you, you well know it; your hour has come. I am your death!

At this moment the gentleman tried to approach the old woman, he tried to shout for help to his companions, but everything was useless, the air was not coming out of his lungs. In desperation he succeeded in exclaiming in a whisper:

– Your supplication is in vain, God calls you to his judgment, and you will have to answer for what you are about to see…

And making a gesture with his hand, he pointed to the Templar the flames of the nearby chimney, where, as if by magic, one could clearly see Mohamed, that Arab whom one night for revenge he ordered to be crucified, next to him appeared Gibelina, the weak maiden who ordered to be thrown into the river after abusing her. There were also the endless number of innocent people who had their throats cut in their bloody years, the pilgrims to whom he refused to give shelter and on many occasions stole… Everyone was there, nobody missed that appointment.

Don Nuño felt that the air was running out, that the forces were abandoning him and his eyes were closing. Everything was darkness.

At dawn, when one of the Templars entered the guard room looking for the absent Don Nuño from his obligatory post, he found the lifeless body of the Templar, with a terrible grimace of fright, hair turned white and abundant blood flowing from his nose and eyes.

Of the mysterious old woman no one knew anything. 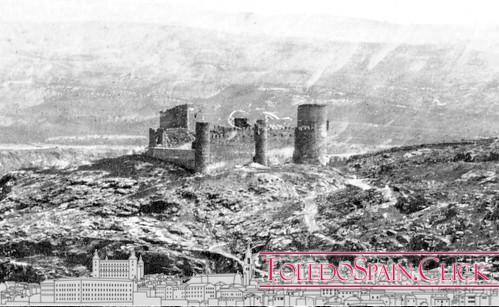 The castle in 1857, photographed by Charles Clifford (Source: Toledo Forgotten)

The castle in 1857, photographed by Charles Clifford (Source: Toledo Forgotten)

Note: this legend is usually represented in the night route through Toledo dedicated to the ” Templars” organized by ” Visitas Guiadas Toledo” (link for more information)

Photo of the route in which this Templar legend is narrated, ” Visitas Guiadas Toledo”