There are not a few who claim that ” something” they have seen or felt in the Castle of San Servando. This ” legend” already comes from time immemorial, as we can observe in the text narrated in 1923 in the magazine ” Toledo” . The fortress, which can be reached by crossing the Alcántara bridge, offers marvellous views of the Alcázar and the city… But are you sure you want to go there when the sun goes down? Read this legend first…

Several doubloons increased the weight of the escarcela of soldier Don Lorenzo de Cañada, tall, dark type, with abundant mane hidden in part by a dark chambergo, wide wings and headdress with an emerald headpiece and a large amaranth feather. Between thin and strong, with lively and penetrating eyes, he wandered his fanfare through the lands of Italy and Flanders, finding himself now in the Toledo Zocodover watching as ganapanes and cicateruelos made theirs trying to slip the bundle before the authority that was trying to watch what was happening among the large crowd that passed through such a well-known square.

When it was curfew time, the big gates of walls and bridges bolted, not without taking care to leave some neighbor outside, for such strong defenses did not get up until the next morning.

Room T4 of the Castle of San Servando. Photo: toledosecreto.es

Later in the night, the watchmen of the bridge of Alcántara reported the movement of torches in the battlements of the Castle of San Servando, voices being heard in the silence of the night. A few minutes later, those of the castle warned the guard of the bridge asking for help and the captain of these was Don Lorenzo de Cañada, sent the sergeant of the guard with ten of those who had fame of brave to find out what happened there.

On returning from the checkpoint, and receiving a report from his sergeant, he left immediately towards the door of Doce Cantos, making himself known to the guard and gaining access to the Alcázar, the dwelling of Warden Don Ferrán Cid, who received the captain in spite of the late hour:

After this brief interrogation, they were left to decide the next day to further investigate the event.

The event of that night in the castle ran by word of mouth through the city. The Warden, after questioning the castle guards and obtaining no solution to the Ensign’s death, decided to double the number of guards. He appointed the young Don Diego de Ayala as head of the castle guard, renowned for his bravery.

That same afternoon the young man took command of the castle, doubling guards. The first hours of the night passed without any fact to highlight, but at about twelve o’clock, time of covenants and demonic pacts, Don Diego needed to go down to the courtyard, doing so by the stairs of the eastern tower, but when he was halfway down, the candle he carried in his hand suddenly went out, and feeling a cold hand holding his neck tightly, he felt a hard leaf go through his chest, and exhaling a cry of pain collapsed inertly on the stairs.

Once the body was discovered, the soldiers searched the entire castle, caves, nearby area… unsuccessfully. Terror was increasing among every man who lived in the castle. 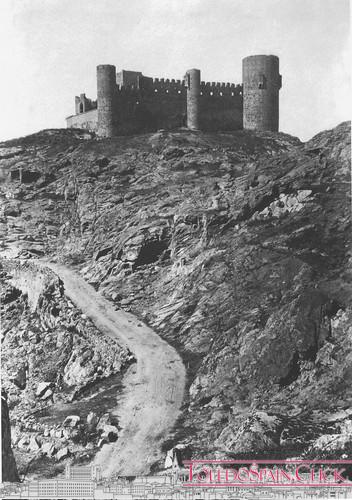 Photo of San Servando Castle in the 19th Century, by Casiano Alguacil, by Eduardoasb on Flickr.com

The following days, when the captains gathered again in the Alcazar, they decided to abandon the defence of the castle and distribute the guard over the city walls.

For days, the castle of San Servando, dark, abandoned, was observed by hundreds of fearful eyes illuminated by torches from the walls overlooking the Tagus.

Several weeks passed and when the deaths were forgotten, a new rumor came to disturb the tranquility of the city. Some wall guards claimed that a shadow appeared in the north tower every night, resembling a huge warrior whose armor shone blue and green.

Nobody dared to pass near the castle, even during the day few people wanted to get close to the walls that hid such a terrible mystery. Everyone already knew that a ghost lived in the castle of San Servando.

Time passed and there were many who missed Captain Don Lorenzo de Cañada. He was no longer seen in Zocodover, and many thought that he had fled the city for fear of having to fulfil the duty of entering the castle and facing the being that inhabited it. 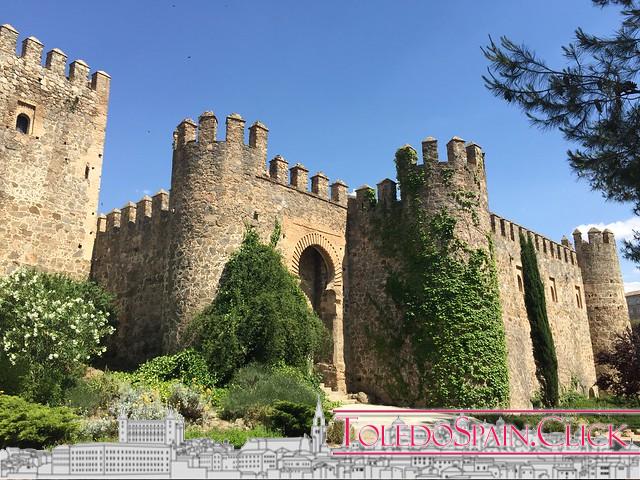 Where were you that week that you missed your usual walk?

Nobody knew it, but it is true that one night when the wind was blowing with intensity and the rain fell on the stones of the wall, Don Lorenzo ordered to open the door of Alcántara, and taking a torch and his sword departed decided to face the ghost, seeking to finish once and for all with the mystery that he had to his scared troops.

He arrived at the west gate, which looks at the city, finding it closed. He waited for a long time at the gate, finally striking two blows on the rough and dry wood that resounded inside the castle with mysterious echoes and funerals. At the very moment of finishing the echo of the second knock, the door opened without any hand to help its movement.

With his steel toledano naked and preceding to his figure penetrated in the castle, arriving at the patio, not before making the sign of the Cross, as corresponded to a Captain of his majesty Don Felipe II the Prudent…

The ghost of the Castle of San Servando has not been seen on the battlements since Don Lorenzo entered only in the courtyard, cape to the arm and with toledana leaf opening way. Who was the ghost of the Castle? Only Don Lorenzo knew and no one else was able to extract this information, to which the captain responded with a slight smile when some pilluelo or soldier questioned him about such an evil presence.

This legend narrates that since then the ghost disappeared thanks to the courage of our hero… But today someone has been interested in what residents and workers of the Castle have felt on numerous occasions?

Who will be the new Captain to stand up to the ” presence” that some have again seen there for another hundred years to rest?

Vicente Mena wrote this legend on December 20, 1923 in the magazine Toledo, number 191. You can also read versions in the book ” La vuelta a Toledo en 80 Leyendas” by Javier Mateo and Luis Rodríguez Bausá and in the anthology by Luis Moreno Nieto.

In the blog ” Toledo Olvidado” you can consult an interesting article about the Castle of San Servando, with photographs from the last century of the fortress and its evolution. They also offer the original legend, scanned. Link: http://toledoolvidado.blogspot.com/2010/06/el-castillo-de-san-servando.html

Have you been staying in the youth residence at the Castle? Do you work there? What has been your experience? Leave it in the comments.