Another of the new legends created by Juan Alvarez Hernandez comes to our pages. In this case inspired by the famous chasuble of San Ildefonso.

Then Juan Álvarez shares with everyone a legend inspired by a famous miracle (the imposition of the Chasuble on San Ildefonso), widely known and disseminated in numerous works of art throughout Spain and we tell you in the guided tours of Toledo, in the Cathedral.

Once again, going through the naves of such a majestic cathedral, I felt, as if to explain it, filled, full of the joy of being toledano. Decidedly my grandfather’s stories were much more entertaining than the infantile ones I had read until now but what made them sublime was that they were from Toledo.

Although, as I said, it was not the first time I entered the cathedral, this chapel, of which I did not know the name, always caught my attention, because it was not like the other chapels of the cathedral inserted in the wall. This chapel was literally attached to one of the enormous columns in the cathedral temple. 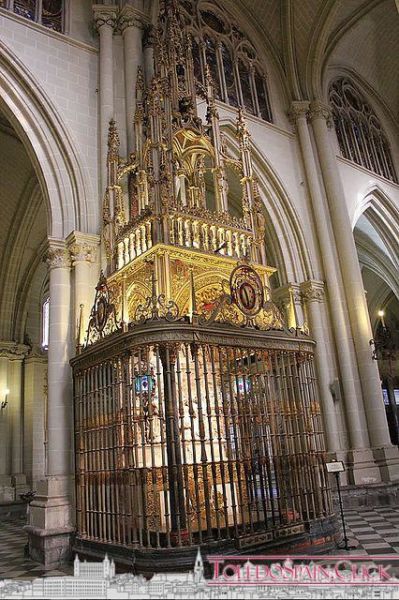 What had always caught my attention the most was to see, not only my relatives when we came here, but also every Toledan who, passing in front of a small gate, read lines that did not become a prayer and then, with devotion, kissed the stone that rested behind the gate.

– Well,” said my grandfather, ” we’ve arrived. In this chapel is the stone in which, according to tradition, the Virgin Mary placed her feet when she descended from the heavens to impose the chasuble on Saint Ildefonso.

– And that’s what this story’s gonna be about? 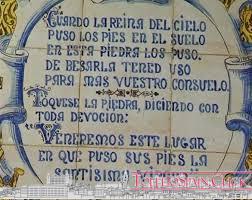 – Well, the story is about another character who lived at the same time as San Ildefonso but, as you will see, did not have such a good end as our patron saint …. this character was called GODULFO .

” Godulfo was a young novice who wasn’t even Toledan. He was born in Seville. From a poor family, when Godulfo turned fifteen he had to choose: to continue living poorly on the alms of his neighbors because he could not find work due to his conduct, his way of being and, why not say it, his vagrancy, to become a soldier or a monk. And, as in addition to the above, Godulfo was a coward because he had no choice but to go to church.

He began to serve as a novice in the convent that the Agalian monks had in Seville, but his sullen, introverted and bad-tempered character made Godulfo gain more antipathy than sympathy on the part of the other friars. As if that were not enough, his lack of interest in the prayers and meditations demanded by the monastic order, as well as the habits of fasting and hygiene, caused Godulfo to go hungry, cold and cramped in the convent, so that more than once he was caught stealing food and warm clothes from other monks.

The Abbot of the monastery had no choice but to say goodbye to Godulfo of Seville and send him to Toledo where, in the area we know today as San Bernardo or Cigarral del Ángel, the agaliens had a monastery whose Abbot, at the time of Godulfo’s arrival in Toledo, was San Ildefonso.

In spite of the bad reputation that Godulfo brought from Seville, San Ildefonso welcomed him with affection and kindness, encouraged him to improve his conduct and, in order to show his confidence in him, appointed him his personal deacon.

But all this did not improve the conduct of Godulfo, on the contrary, produced a new evil in his soul: the envy he felt for San Ildefonso.

With time Godulfo’s behavior did not improve, he remained lazy, lazy, stealing on the sly whenever he could… It was then when the event occurred that we all know and is going to change the life of San Ildefonso. After the death of Saint Eugene, bishop of Toledo, the Toledans chose San Ildefonso as their successor, who had no choice but to leave his peaceful monastery and go to the capital of the Visigoth kingdom. Godulfo also accompanied our patron saint and, a few days later, the miracle of Our Lady’s descent occurred to impose the chasuble embroidered by the Virgin and her angels on San Ildefonso.

This increased Godulfo’s envy of our archbishop and his craving for power.

Months later San Ildefonso died and Godulfo is going to try to make a new pillería. Taking advantage of the funeral of the dead archbishop, Godulfo entered the private rooms of San Ildefonso. He went straight to the wardrobe where the Chasuble of the Virgin was kept and did not hesitate to take it. He thought to flee but his vanity and anxiety made him doubt for a few moments…, he could not wait to be far away and try on such a luxurious jewel so, right there, in the room of San Ildefonso, he put on the chasuble…

– How well I look with her!

– Just punishment for their sins – concluded by telling my grandfather –

– And… where is that chasuble today, Grandpa? -ask with the impatience of the one who wants to know everything quickly-

– Oh, Juanito! That, only God knows, are other stories that no longer have to do with Toledo

– Because, after the invasion of the Arabs, the remains of San Ildefonso came out of Toledo and nothing is known about the holy chasuble… and enough is enough since it is very late! -my grandfather wanted to put an end to it this way but I kept insisting-

– Grandfather and… where is San Ildefonso buried now?

– In ZAMORA and, now, let’s go home, Granny’s waiting for us.

If you liked this legend, maybe it’s a good time to get to know the city of Toledo. If you are looking for suggestions on how to get there, where to stay, where to eat or any other information, in our pages you will find a lot of information to visit Toledo.