The Cathedral of Toledo… Hundreds of legends, secrets and curiosities within its walls. Today we bring a new one, created by Juan Álvarez, who continues to share with us the legends that his grandfather told him as a child.

– Today is Sunday, Juanito, we’ll go to mass at the cathedral.

– What a big deal, Grandpa! In the cathedral the masses last an eternity -protest even knowing that I would not be able to change my grandfather’s opinion-

– Depends on the priest. But you know that going to Mass on Sundays is a precept that must be kept. Also, perhaps, you will have a prize if you behave yourself. -said my grandfather to cheer me up-

– Or two, who knows…..in the cathedral many tales and legends happened….

– Yes,” I stated emphatically, ” in the book you left me I have already read some.

– Do you remember who? – asked my grandfather-

– Ouch! From a poet with a very strange name… Bec…

– Yes, grandfather……. of that Bécquer.

– One of the most important poets of Spanish romanticism. But well, it’s not about him that I’m going to tell you a story, but about the Virgin that he describes in his legend.

Now, in the cathedral, and after hearing the Holy Mass in St. Peter’s chapel, I followed my grandfather to see where he took me to tell me the story because I had been very good at Mass! We crossed in front of the main altar and my grandfather stood before a grandiose fresco more than ten meters high that represented St. Christopher with the Child Jesus on his back. 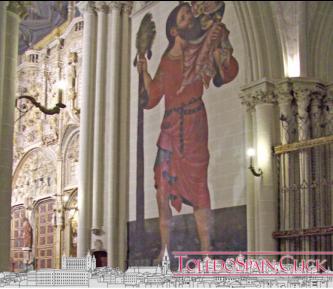 – Have you noticed, Juanito, how big the doors of this cathedral are? -my grandfather interrogated me even though I already sensed where his question was going-

– Yes grandfather, aren’t you going to ask me which one of them did San Cristobalón enter the cathedral?

– And… why did you know that was the question I was going to ask you?
– Because Dad asked me that same question for the first time…

– That this time Dad cheated on me, but he also warned me that if I came with you to the cathedral, I would be careful because you would ask me the same question.

– Well, well,” said my grandfather in a somewhat contradictory tone, ” I was actually going to ask you to look carefully at the painting and find the eight fish painted at the saint’s feet.
– Eight fish! See if I can find them

Logically, I couldn’t find them. Later, my grandmother Maria would tell me that, in reality, in the painting there are only seven fish that represent the seven capital sins that want to devour the Child and Saint Christopher protects him. Everything had been a joke of my grandfather for having annoyed him with the typical question of how did San Cristobalón enter the cathedral?

We leave behind the fresco of San Cristóbal and continue walking towards the ambulatory of the cathedral. At last we arrive at the chapel of San Ildefonso, patron saint of the city, the chapel of the chasuble of the Virgin, a story that every good Toledan must know and which, despite my insistence, my grandfather told me again and I omit to reflect it in these stories (perhaps later…)
.
Well, in one of these grandiose pillars, stone palm trees as defined by Vicente Blasco Ibáñez, there is a small wooden altarpiece that represents the last Supper and, below this altarpiece, there is a small hole protected by an iron grid.

– Wait, I’ll hold you and put your fingers between the bars… what do you play?

– Yes, it can be, of course remains of stone is not because it is smooth and soft.

– Soft? -my grandfather missed it- play it a little better.

– That’s better now, and since you behaved very well at Mass I’m going to tell you the story of….. those bones?

… When a nobleman from Toledo sent for his two sons…

– My children, I have sent for you because I feel older and I know that I will not delay in surrendering as many to God, our Lord. You, Alonso, who are my firstborn, will inherit my surname and my lordship with all its goods.

– Thank you, father and gentleman,” answered Alonso, the eldest of the brothers, ”

– You Ferran, as a second, have no right to any part of my fortune and you will have to prove your worth with some act of courage, piety, generosity… nobility, in a word. If you succeed, your brother will pay you as part of my fortune, a salary of five hundred maravedíes a year with which you can live comfortably without hardship.

A few days later, the two brothers said goodbye to the shadows of the new cathedral that was slowly emerging in the interior of our city.

– I don’t know how long I’ll be out of Toledo – Ferrán commented to his brother Alonso- maybe I’ll never come back.

– Are you mad at the father?

– No, I know that history and tradition rule in these times… -Ferrán looking at the first walls that were being built of the new cathedral continued talking to his brother- Destiny is very capricious, but I would like that, someday, my remains rest in some chapel of this cathedral.

– You know that our family is going to finance some of them, I will try to fulfill your wish if you do not return to Toledo but, tell me, where do you plan to go? Which of the noble acts that father has recommended you to perform?

-I don’t know. To war against the land of the Moors. Perhaps on pilgrimage to the Holy Places. Maybe I’ll let my horse direct my destiny…

The two brothers bid each other farewell with an effusive embrace. Palestine was the place chosen by Ferran to fulfill his father’s wishes and, as a devout pilgrim, he began his journey. He crossed seas, valleys and mountains. He lived a thousand adventures always protecting the weak and respecting justice. Finally, one day, our brave Ferran was in a desert close to the Holy Land. In spite of the proximity to the end of his destiny, the forces began to weaken him, alone and lost, dead of hunger and thirst, our knight believed that the moment of his death had arrived without having been able to fulfill his objective to arrive at Jerusalem and to pray before the Holy Sepulchre.

Suddenly, as if it were a dream or an illusion, Ferrán saw the figure of a person who bowed before him and offered him water from his pumpkin. Ferran drank in moderation and wanted to give the pumpkin back to that character who, without a doubt, was another pilgrim like him.

– My name is Santiago, and I’m a pilgrim, just like you. I am a Galilean and my pilgrimage takes me to other lands. Keep the pumpkin and the water that it still has. You will need it more than I do, and if you use it wisely and generously, you will have the reward you long for.

That said, the pilgrim disappeared as if by magic and Ferran fell asleep. When he woke up, Ferran thought that everything had been a dream but, No! The pumpkin was by his side.

Ferran continued on his way to Jerusalem. Along the way, more pilgrims were found who, like him, went through their difficulties and hardships to reach the Holy Land, the heat and thirst was what made all these walkers faint.

Ferran was pious and generous to them because he did not hesitate to give them water to drink from his pumpkin… until it is exhausted,” thought Ferran

But, here’s the miracle… the water never ran out! That pilgrim Ferran had come across on the way, the one who had saved his life and given him his miraculous pumpkin was none other than James the Apostle, the disciple of Jesus.

– Did Ferran return to Spain, grandpa?

– No, Juanito, once Ferran arrived in Jerusalem and was able to pray before the tomb of Jesus, Ferran became a hermit who went through the desert helping the pilgrims and giving them to drink that water from his miraculous pumpkin.

– So you couldn’t fulfill your desire to be buried in the cathedral?

– Well, they tell the stories that, when Ferran died, some of his disciples and friends he had in Palestine brought part of his remains to Toledo.

– Oh, yeah, the bone we touched in that column.

– Oh, Juanito! Are you sure you’ve been touching a bone? -My grandfather said in a funny tone, ” Come, I’ll help you again.

– What are you playing, Juanito? -my grandfather asked me again

– Then what am I going to touch? Don Ferran’s bone!

– Yeah, even though I realize it’s a little rough.

– Oh, Juanito! It’s a little rough because what you’re touching isn’t a bone, it’s A TROCK OF THE SANTIAGO SQUASH.