These were the days of the reconquest of Toledo by King Alfonso VI. All over the twisted streets of the city there were patrols of pawns and riders who, like policemen, watched over all the crossroads, roofs and mullions, to avoid any blow of hand or conspiracy of the defeated Muslims.

Below is one of the legends that identify a well known Toledano landscape. On the way to the viewpoint of the Valley, a recently built bridge crosses a spot that a stream known as the ” Degollada” flows into the Tagus… This bloody name, as is usual in Toledo, has its legend:

These were the days of the glorious reconquest of Toledo by King Alfonso VI. Throughout the twisted streets of the city there were patrols of pawns and horsemen who, like police, watched over all the crossroads, roofs and mullions, to avoid any blow of hand or conspiracy of the defeated Muslims, as well as collisions and revenge of Jews and Mozarabs, who wanted to take advantage of the opportunity to feel victorious to take revenge on the humiliations and opprobrium that for many years had been suffering from their oppressors; which would have compromised the faith sworn by the Christian monarch, to respect their religion, laws, customs, lives and estates. 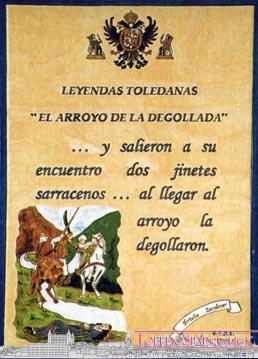 One of the days patrolled by the young and bizarre captain of Leonese mesnaderos Rodrigo de Lara, when he looked up to recognize a high ajimez, he was pleasantly surprised, with the presence in him of a beautiful morita that, with an uncovered face, looked out, fixing on the warrior his expressive and torn eyes.

In love with that beauty, it didn’t take long for the curious gallant to make his escort return to pass second and third time under the nice and attractive ajimez.

Since that fortunate day, Rodrigo had not ceased to roam that little street, attracted by the beautiful agarena, called Zahira, until he could understand her and managed to give her a night appointment through low lattice, where she could speak quietly and without being noticed by anyone.

Frequently interviewed, they opened their hearts, developing in them a lively and vehement loving passion.

To explain Zahira to Rodrigo the origin of the former, he confessed that due to the explanations that a Christian slave gave him, of the excellence of the Religion of the Nazarene, and the exaltation that the woman was in, The idea of converting to Christianity and not loving in Heaven but Jesus, his Virgin Mother and the saints was born in his mind, and among these, with preference to the princess of his lineage, the distinguished Saint Casilda, whose name he wished to receive at baptism, and to whom he entrusted his conversion; And on earth to a brave Christian knight to whom she would marry, to protect and defend her against the vengeance of her fierce father and his relatives, who would not forgive her for the apostasy of Mohammedanism.

After many conversations and projects to realize their dreams and hopes, they conceived the plan to flee to a nearby castle of a doubt of him, in whose chapel a Priest, who was already prepared, would baptize her and then unite them in an indissoluble matrimonial bond.

Favourable circumstance was presented to the lovers, with the precision that her father had of leaving for Andalusia; and everything foreseen and helped by the catechist slave and confidant, the kidnapping was verified, mounting the covered lady to the rump of the horse, girding himself with the arms to the waist of the galán, who spurring the steed made him undertake fast gallop towards the bridge of Alcántara.

Recognized by the warden of the fortress, the couple was given free passage, not without hearing the chazonetas of the soldiers before that unusual and loving adventure.

Calmly the fugitives continued, chatting about love lullabies, along the Roman road, when suddenly two knights suddenly appeared in front of them in two horses, that were betting there, dedicated to the prowling of the passers-by, and closing their way, they shouted:

-Ah, Christian dog, for Allah’s sake, let go at once that blackberry that you carry captive, or here you’ll bite the dust!

Rodrigo nailed the acicates to the brute and to free rein undertakes vertiginous race. But when he reaches the stream, one of the persecutors reaches the neck of the maiden with his scimitar, who, shouting horribly, falls at the feet of the horse.

Rodrigo turns quickly, and lunge at the murderer with his spear, pierces him from chest to back and sends him out to dine with Satan.

He then hastens to come to the aid of his beloved, who was still alive; he recognizes that she is beheaded, and that all human help is useless, and resorting to the divine, he removes his helmet, takes water from the stream into it, and pours it over the head of the dying woman exclaims:

-Beloved Casilda of my heart, your will be done! I baptize you in the name of the Father and of the Son and of the Holy Spirit. Fly, fly with Christ, who is the Bridegroom waiting for you! Beg Him for me! Goodbye!…

He said: ” And that soul, now purified, departed from that virginal body to enjoy the eternal joys. 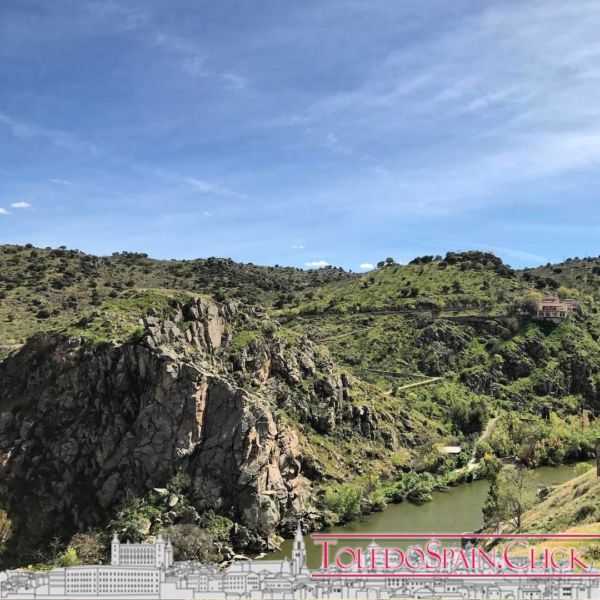 Replaced some of his bitter sorrow the heartbroken lover, climbs to the crest of the nearby hill of the Bú, and from there shouts to the guard that to the opposite bank of the Tagus was, in the tower of the Iron asking for help, which did not take long to arrive in a boat, in which he transferred the corpse; Then he went up to the not far away Mozarabic Church of St. Luke, where the following day the kindly Parish Priest, after the Mass with the body present, gave him a Christian burial, prior to the responsibilities of the rubric.

A few days later, in the brand-new Clunian monastery of San Servando, the holy habit was received by the novice Rodrigo de Lara; who, by permission of his superiors, went every day at dusk to pray in the same place where Casilda exhaled, on the shores of the fateful stream, which since then has been known in Toledo under the name of La Degollada.