The Toledan tradition says that on nights with a clear and luminous moon, a shadow can be seen floating over it and its surroundings. It is the spirit of Prince Abul-Walid who comes out of his tomb to contemplate the silhouettes of the dwellings, towers and domes of the city being drawn in the lunar glow. 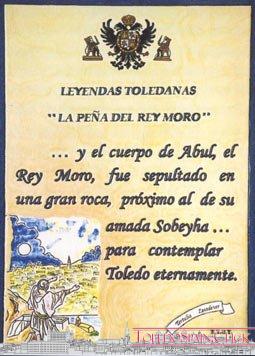 The Toledan tradition says that on nights with a clear and luminous moon, a shadow is glimpsed floating over it and its surroundings. It is the spirit of Prince Abul-Walid who comes out of his tomb to contemplate the silhouettes of the dwellings, towers and domes of the city being drawn in the lunar glow. It was 1083 and Yahia Alkadir, Al-Mamum’s grandson, reigned in Toledo. Alfonso VI surrounded the city razing the countryside, hoping that hunger would force the Muslims who defended the square to surrender. Yahia resorted to the memory of the friendship of the Castilian king with his father, of the benefits that he received from that one; he lowered himself to offer him tribute, somewhat burdensome for his coffers and his possibilities; but none of it made soften the heart of the ” of the pierced hand” , who rejected all the reasonings and offers that in exchange for leaving the site could be done to him. He only wished to take the capital of the Moorish kingdom of Toledo.

Yahia went to the friendly Moorish kings, telling them of the terrible consequences that the fall of Toledo into Christian hands would have for Arab power; but he only found support in the taifas of Zaragoza and Badajoz; however, fortune turned his back, as the king of Zaragoza died before he could carry out his aid project and the king of Badajoz also died, after being defeated by Alfonso’s troops, which came out on his way to Toledo. Yahia was not resigned to losing his kingdom and sent new messengers to the other side of the strait, to North Africa. The African kings heard the distressing request for help sent to them by their brother of race and decided first to send an observer to, once known the situation and real needs, determine definitively the kind and amount of help needed to send.

The choice fell on the young prince and brave warrior Abul-Walid. The African prince arrived in Toledo and was received by Yahia, who would be about the same age as the one who is thought to be our only salvation, just as a shipwrecked man grabs a board that floats in the middle of the sea and has nowhere else to hold on to. Abui soon realized the gravity of the situation.

During his stay in Toledo there were parties and tournaments in his honor and he met Sobeyha, sister of his host. Love caught on between the two young men and, in the midst of the pain of the misfortune that threatened them, a spark of joy filled those sensitive hearts. 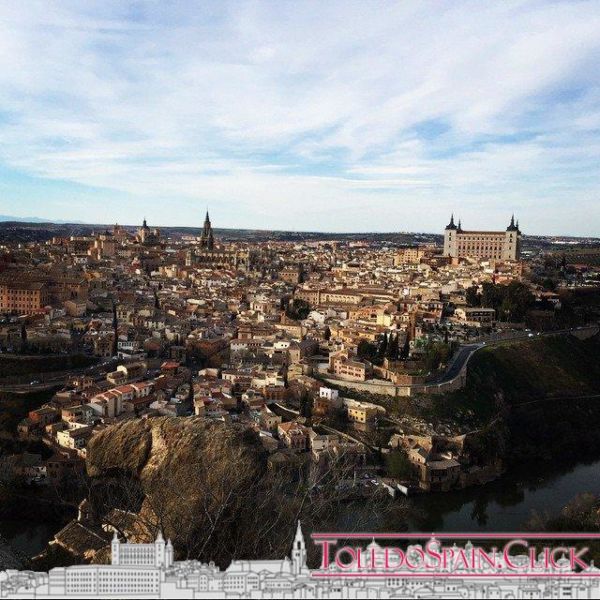 To Abul, his head told you that he had to return to his homeland to tell the Moorish kings what he had seen in Toledo and thus fulfill the mission that had brought him here, but his heart kept him in the Muslim capital; he did not want to abandon those black eyes like the night, that velvet complexion, those cheeks as soft as rose petals; in a word, he did not want to abandon that princess with whom he had fallen madly in love. In the end he was more obliged and had no choice but to leave Toledo, but with the promise of returning soon with the necessary help and with the intention of marrying Sobeyha.

While Abul was in Africa recruiting people and preparing everything necessary to return to Toledo to help his friend Yahia and with the most intimate desire to see his beloved again, Alfonso Vi seized the city, which could not resist any longer. Yahia left the place where he was born, but could not take with him his sister, because Sobeyha, unable to withstand the hardships of the site and consumed by the disease, had died.

An old slave, Aben, who had served Sobeyha since she was a child, did not accompany his lord Yahia in his proscription, but remained in Toledo to carry out a mission that she entrusted to him before he died: to wait for Abul’s coming and go out to meet him and tell him that he had died thinking of him, that he had died waiting for him. The fall of Toledo in the power of the Christians raised an intense clamour of anxiety and pain in the Muslim world, which did not resign itself to losing it just like that, without trying to recover it. Not much time had passed when a large and formidable Saracen army appeared before Toledo from Africa to help his brothers, without knowing that Yahia had surrendered and the city was already under the power of the Castilian king. It was Abul-Walid who, after resolving serious matters in his country and recovering from a long and serious illness, returned to fulfill the promise he once gave to those who had trusted in him. But in truth, what had sustained him and helped him overcome all obstacles, what had given him strength to fight and resist the hours of despair, had been the memory of his beloved Sobeyha. He longed to return to explain to his friends the reasons for his tardiness and thus dispel the doubts and suspicions that might very possibly have nested in their hearts and to secure upon his faltering throne Al-Mamum’s grandson and make his wife his sister. But when he arrived in front of Toledo, the bad news reached him: the city no longer belonged to his people, the Christians had managed to take it and their banners were raised in their towers and Abén, the black slave he had met during his stay in Toledo, told him Sobeyha’s death and his last words. Abul’s heart was filled with sadness when he learned what had happened to his beloved through the mouth of that slave. He dropped his head on his chest and two tears escaped from his eyes, rolled down his cheeks and watered the floor of his tent; but taking out the strength of weakness he recovered and exclaimed: -I have come to liberate your city and I will fulfill my promise. I want to go back to the places that she loved so much and it is my desire to visit her in the tomb where she sleeps her last dream.

Abul’s army occupied the outskirts of Toledo, on the other side of the river, where today’s cigarettes and the Infantry Academy are located. 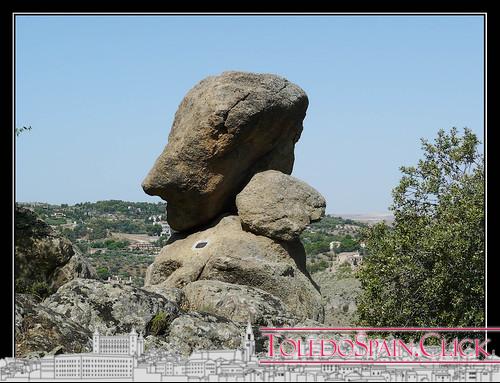 The command post was installed in the esplanade that is in the steep and rocky slopes of the hill that faces the hermitage of the Virgen del Valle. Abul-Walid’s shop, with its rich silks and valuable tapestries, was placed next to the largest rock that crowns the hill and dominates the landscape. He went up to it every day and at dusk he sat up there and remained absorbed and thoughtful until the darkness totally took over the Earth, looking at the city that kept in its bosom the remains of the unhappy Princess Sobeyha. It is said that many times he was seen bending his head over his chest and crying bitterly.

Studied with his captains the strategy to follow to enter the city of Toledo and chosen the best time for it, arranged his army to execute the agreement and harangered his troops telling them that he was willing not to move from there until Toledo fell into his power and that he expected nothing less from them. That Allah would reward their effort and courage.

The Christians, from the towers and battlements of the walls, saw every day the Moorish prince standing on the high rock and the numerous tents and bonfires that covered the entire field that extended before their eyes. All this instilled in them a great fear, especially when they did not have among them their king Alfonso, who some time before had left for León to resolve certain important matters that required his presence, and although they had sent messengers to him requesting his help, they had not managed to cross the enemy camp; but there was the Cid Campeador, whom the king had left in charge of the garrison in the fortress, which he proposed to surprise the army of Abul-Walid. Thus, he anticipated the enemy’s intentions and one night, in favor of darkness, he left Toledo at the head of a large army, crossed the river stealthily and in a rapid deployment gave a ” hand strike” that surprised the Muslim troops, sowing disorder in their ranks. The shadows were their strongest allies, as the Moors came to fight each other.

When the first lights of the day arrived, the Muslims realized their disaster and the worst thing was that they found their king dead in the great rock that he almost never abandoned. His body was covered with wounds, a sign that he had fought bravely and an arrow had pierced his chest and broken his heart. 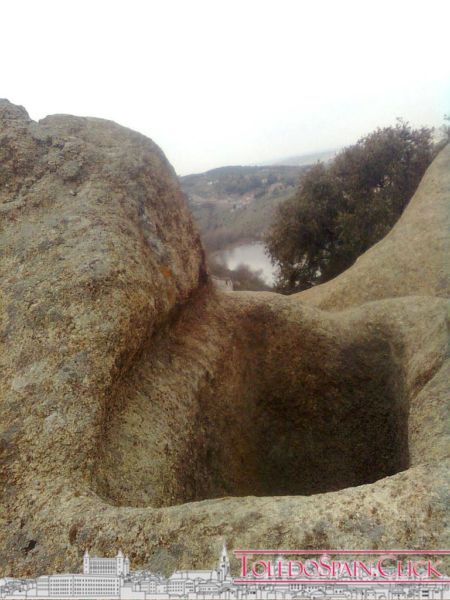 The chiefs who were still alive on the agarene side ruled that there was no possibility of redress and that the best they could do, to save the lives of those left standing, was to surrender. They did so. They met with El Cid, who agreed to their request, allowing the rest of the Saracen army to return to their land. He also allowed Abul-Walid’s body to be buried under the rock, so that his desire to remain there forever could be fulfilled so that he could contemplate, even from afar, the city that hosted the body of his beloved. Therefore, this rock that dominates the heights of the hill of the Valley is known since then as the ” Rock of the Moorish king.

But the story doesn’t end here. At the foot of the ” peña” can be seen several rocks that, placed one on top of the other and seen from a certain position, appear the head of a man encircled by a turban. The Toledan tradition explains the fact in the following way: When the remains of the Moorish army were broken and tranquillity returned to the area, the soul of Abul-Walid would come out every night from his grave and sit on the great rock to contemplate the city where his beloved lay. At dawn he returned to his tomb. One day, when the dawn was near, he asked Allah to allow him to remain there constantly and not to force him to hide in his grave, and the god, seeing him so unhappy, granted him what he asked for, turning him into stone. 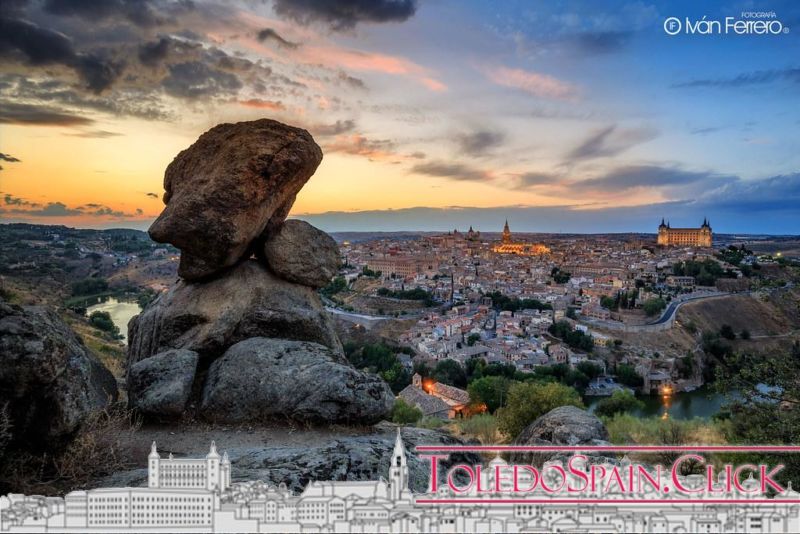