” Tradition tells us that King Alfonso entered the city through the old gate of Bisagra, which now bears his name, accompanied by a large retinue of important characters.

Tradition has it that back in the middle of the 6th century, when Atanagildo reigned in Spain, there was a fanatical group of Jews in Toledo, who felt a great abhorrence and hatred towards the images of Christ crucified. They had a special animosity towards a small Christ who was very venerated by the Christians of Toledo and who was in a small Visigothic church next to the door of the Conquest or Agilana (so called because it was believed to have been built in the times of Agila) and later rebuilt and renamed Bab-alMardum. 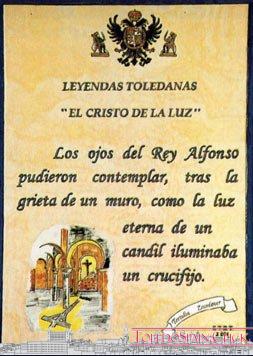 The Christ of Light, ceramic plate

Their hatred reached such an extreme that they devised a diabolical plan: to spread a very powerful poison on the feet of Christ, and as it was the custom of Christians to pray to Him, to ask Him for a favor and then to kiss His feet in order to obtain the concession of the supplication, they believed that with their action they would achieve a double purpose: to kill an indeterminate number of Christians and that they would come to hate the hitherto venerated image, shaking their faith. So they executed their evil design by taking advantage of the solitude of the church and the darkness of a new moonlit night. However, they obtained as a result the opposite of the devised plan, because it happened that, the next morning, when the first devotee came to pray before Christ and then tried to kiss, as usual, her feet, the miracle took place: Christ removed the foot, removing it from the cross, allowing the lips of the woman to touch him. The stupor increased when the same fact was repeated a series of times and with different people.

The miracle was known, but the motive was not known. At last the priest, aware of the event, went towards the crucifix and observed a yellowish-green spot on the unnailed foot, betraying the poison. 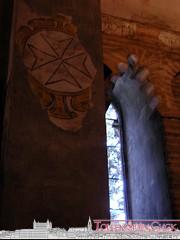 Interior photo of the Mosque: Pedronchi, on Flickr.com

Against the intention of the Jews no Christian died and the fame and popularity of Christ increased throughout the city, reaffirming the faith of many unbelievers or lukewarm believers.

One of the most fanatical and intolerant of those Jews was Abisaín, who lived in Valdecaleros Square. It was he who carried out the project proposed to him by his friend Sacao, and it was the same friend who brought him the news of the miracle that happened, which filled him with anger and desires for revenge.

That night Abisain could not sleep and when tiredness made him close his eyes it was to be tormented by terrifying visions: the face of Christ was heading towards him until it exploded in his and then a flock of people chased him with fierce glances and outstretched arms trying to catch him to destroy him. Once again, the Christ detached himself from the cross, and with open arms he moved forward towards him, seeming to want to hold him against his chest. He awoke and rose with aching body and soul. The uneasiness continued throughout the day and to relax he went for a walk on the outskirts of the city. 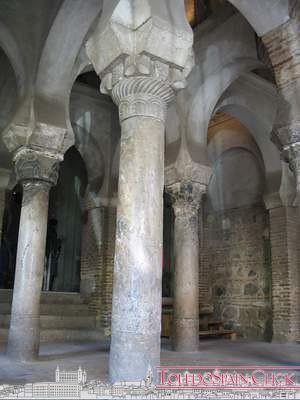 A storm was coming. The sky darkened, lightning illuminated the atmosphere, and thunder rumbled closer and closer. Abisain hurriedly returned from his walk with greater inner discomfort than the one that invaded him at the beginning and without realizing it he entered the city through the Agilana gate. The small church was lonely and dark; only a weak lamp shone before the image of the Crucified One. Abishain entered the sacred enclosure in spite of the fear he felt and approached the Christ. He watched with astonishment and rage how the Crucified One had a foot unnailed and separated from the wood, as his friend Sacao had told him. To such a degree came his anger that, taking in his hand a knife that he carried to the belt, he nailed it to the chest of the Crucified One. Because of the strong impact, the image fell to the ground while a cry of pain ripped the air and the lamp went out. Died of fear, he thought of fleeing, but his hatred could have been more and he picked up the Christ thinking of destroying him. He hid it among his clothes and, after verifying that there was no one around, ran away with the image as a heavy downpour fell.

He arrived at his house in Valdecaleros, after climbing the hill and crossing the deserted streets of Tendillas and San Román.

I’m sure you’ll also be interested in: Easter Program and Information in Toledo

It began to dawn and he was still sleeping, resting from past emotions, when a strong rumor of angry voices began to be heard. A mob of angry and threatening people stood in front of his house. Among the voices, his name was clearly heard. They accused him of hurting Christ and stealing from him. How could that be? No one had seen him. He soon found out what had given him away. The clothes in which he had brought the image hidden were dripping with blood and it had left a trail all the way, despite the torrential rain that had swept the city, until it reached the door of his house.

The Christ was rescued and replaced at the altar of his small hermitage and the Jewish Abysshaim imprisoned. After a brief trial he was condemned as the author of the sacrilegious crime and stoned publicly.

SECOND LAW ON THE CHRIST OF LIGHT:

Tradition tells us that King Alfonso VI entered the city in 1085 through the old gate of Bisagra, which now bears his name, accompanied by a large entourage of important characters. He took the most direct and natural route, although more difficult: the slope of Cristo de la Luz. He passed through the door of Valmardón and when his horse passed in front of the mosque, he knelt down and refused to move forward. The case was considered very unusual and before the persistence of the animal in his attitude was thought to be a warning from heaven.

Looking for the explanation of this surprising fact, one penetrates in the temple and it is observed that of one of the walls a powerful brightness comes out that illuminates the enclosure. It was ordered to excavate in the place and was found hidden behind the wall the crucifix that, despite the almost four centuries spent in its enclosure, kept alive the flame of a small lamp. Great contentment and joy produced in the conquerors this miraculous discovery, who took the Christ, and led by him, came to Zocodover.

The crucifix was later placed in the old mosque when it was consecrated and ready for worship of Christianity, taking from that time the name of Hermitage of the Christ of Light.

(Note: some authors point out that it was not Alfonso VI’s horse to which this event occurred, but his lieutenant D. Rodrigo Díaz de Vivar, the Cid Campeador, who is said to have been the first mayor of Toledo).